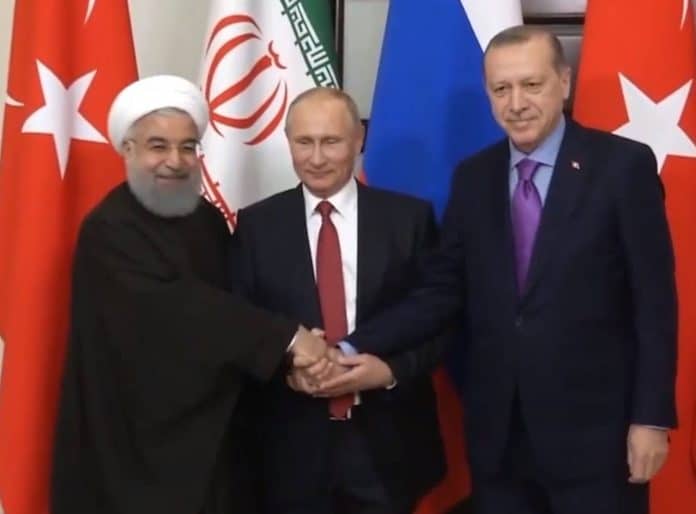 When the Joint Comprehensive Plan of Action was announced in 2015, the Iranian people poured into the streets to celebrate what they thought was the beginning of a new era.

Long squeezed by both U.S. pressure and their own government, they had just cause for optimism. The threat of war was receding, and the sanctions that had stifled Iran’s economy were soon to be lifted. Many hoped that Iranian President Hassan Rouhani ― vindicated by his success at the negotiating table ― would leverage his political capital and ease Iran’s harsh security environment at home.

Today, as U.S. President Donald Trump tears up the agreement, the Iranian people are once again those who will suffer most. Iranian hardliners, empowered by the deal’s failure, are sharpening their knives for Rouhani and Foreign Minister Javad Zarif, and the chances of catastrophic war are undoubtedly greater.

Iran did everything it needed to comply with the accord’s terms, destroying the core of its reactor at Arak, empowering International Atomic Energy Agency inspectors and dramatically limiting its uranium enrichment program. Sanctions were initially lifted under President Barack Obama, and Iran saw some limited relief. But that long-overdue optimism was quickly halted by the election of Trump, who vowed to terminate the agreement struck under his predecessor. Iran’s hopes for a brighter future had been turned over to a reality TV star turned demagogue.

Doubts about whether Trump actually meant what he said during his volatile campaign were put to rest in the first week of his presidency, when he banned Iranians and many others from entering the United States on the basis of little more than bigotry.

Shortly after the ban, Trump began subjecting the nuclear deal to a death by a thousand cuts. Major deals with international companies like Boeing never came to fruition. European banks, fearful of U.S. sanctions that remained on the books, refused to re-enter the Iranian market. Moreover, Trump and his top officials repeatedly violated the accord, warning foreign companies against doing business with Iran while leaving the implementation of U.S. commitments in doubt.

And in March, Trump began elevating the most caustic voices on Iran to key national security positions. John Bolton, who has never stopped calling for bombing Iran and took money from a despised Iranian terrorist cult that seeks regime change, became national security adviser. Mike Pompeo, one of the foremost opponents of the nuclear deal, is now secretary of state. The threat of war has returned, this time more imminent than ever before.

Many Iranians are again feeling hopeless ― due to a variety of factors, not the least of which is an economy stifled by sanctions ― a fact that manifested in December and January when Iran was rocked by the largest protests since the 2009 Green Movement. Yet, many stayed home ― not out of support for the regime but out of fear for what might come next.

Now the hardline narrative ― that the United States cannot be trusted and will never lift the sanctions ― has been vindicated by Trump’s shortsighted and self-serving decision to abrogate the nuclear accord. The hardliners seek to seize back all levers of power from moderates like Rouhani and Zarif, to destroy hopes for reform and to ensure the elevation of a hardline successor to Iranian Supreme Leader Ali Khamenei. If they succeed in doing so, it will mean greater repression at home and escalation abroad.

Yet, much like hardliners in Washington, Iranian hardliners have no good “plan B” for what comes after the deal. And, given the suddenness of Trump’s decision to rip up the deal without an Iranian violation, Rouhani and Zarif have been given one last chance to salvage nuclear compromise and to prevent Trump’s war cabinet from finding a justification to put their war and regime change plans into place.

European Union foreign policy chief Federica Mogherini has vowed that Europe will stick with its commitments under the deal, acting within its security interests and protecting its economic investments. French President Emmanuel Macron has warned that Trump’s decision threatens the very fabric of the nonproliferation regime. Critically, Rouhani as well has indicated that Iran can achieve benefits under the JCPOA without the United States. This sets the stage for a last-ditch effort for Europe, Russia, China and Iran to negotiate a follow-on deal, with Europe taking steps to mitigate the effects of U.S. sanctions re-imposition and protecting companies doing business with Iran.

But the chances for such a follow-on agreement, even absent Trump, are slim.

Europe, in particular, is extremely vulnerable to U.S. sanctions, and Europe has been slow to recognize that its best hope for keeping the nuclear deal rests not with cultivating Trump but in blocking Trump. Israel and Saudi Arabia also hold many cards that could short-circuit diplomacy and drag the United States into direct military confrontation.

The majority of the Iranian people, though, have little choice but to hope that Rouhani and Zarif can navigate these treacherous waters, lest Iran be torn apart by outside powers, just like Iraq and Syria before them.