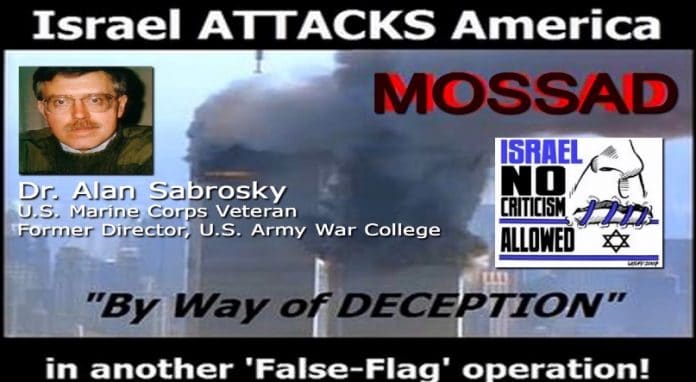 Jewish* ex-Marine Corps Sgt. Alan Sabrosky,  former Director of Studies of the Army War College’s Strategic Studies Institute, came on my radio show in March 2010 to state that “9/11 was a Mossad operation, period.” Mentioning Alan’s name during the Q&A at public events can get you arrested, as Jeremy Rothe-Kushel found out the hard way:

Dennis Ross: Well, look, I don’t think that as a matter of policy, that the United States or Israel engage in acts of terror.  Terror is you target deliberately civilians for an expressed political purpose. The idea that Israel had something to do with 9/11 is just outrageous – they had nothing to do with it.

Rothe-Kushel: Tell that to the Marine, Alan Sabrosky.

What’s the connection between the 9/11 coup, the Zionist takeover of America, Israel’s preparations for launching a huge new war, and escalating censorship? Alan Sabrosky breaks it down…and offers a few strategic tips to the Resistance.

*”I express my Jewish ethnicity through cuisine, not foreign policy.” -Alan Sabrosky