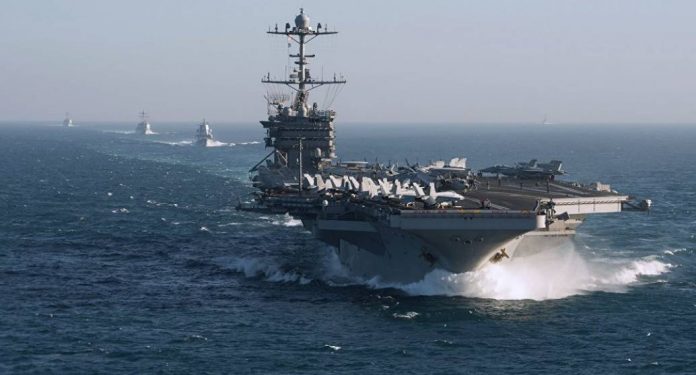 The two ships first met two years ago, when one of the escorting vessels from the USS Harry Truman’s carrier group dangerously crossed paths with the Russian Yaroslav Mudry. At the time, the US accused the Russian frigate of trying to interfere with the group’s operations.

The UK ITV network reported on May 11, that the USS Harry S. Truman, which is conducting operations in the eastern part of the Mediterranean, has been “playing cat and mouse” with a group of Russian frigates, led by the well-known “Yaroslav Mudry.” According to the network’s correspondents stationed on board the US ship, the Russian counterpart could clearly be seen following each move made by the USS Harry S. Truman.

Although the two groups of ships had a negative encounter two years ago, there have this time around been no incidents. According to the ITV reports, things now are instead “sweetness and light.” The two flagships are now continuously exchanging information on lines of communications established back during the Cold War. Even now, these protocols are used and since relations between Washington and Moscow are not at their best, both sides use them to avoid potentially dangerous incidents.

Currently, the USS Harry S. Truman’s group is tasked with conducting strikes against remaining Daesh forces in Syria. The length of their stay in the eastern Mediterranean is currently undetermined (or at least not announced).