… by Uri Avnery, … with Gush Shalom

Cheques to help us with ads and campaigns to

Please, include your email address 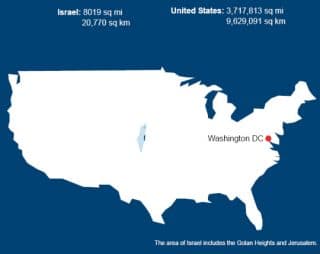 “If you want to understand the policy of a nation, look at the map!” Napoleon is supposed to have said.

It is good advice.

If you are living in Israel, these days, you get the impression that the huge State of Israel is dictating to its American vassal what to do about Iran.

President Donald Trump listens and complies. Bibi the Great tells him to tear up the Iranian deal for no obvious reason, and he obeys. He has no choice, poor man.

But then you look at the map, and to your great surprise you discover that the USA is a huge country, while Israel is a mere speck, so small that its name has to be written outside its borders, in the sea.

So what is wrong? Geography, of course, is not the only factor. Israel has some millions of faithful adherents, who are American citizens and have a lot of money. But still.

Can it be that we got the picture wrong? That Trump is not the vassal of Netanyahu, that it’s the other way round? That Trump dictates, and Bibi, for all his bluster, just obeys?

It would not be the first time. In ancient times, the leaders of the Jewish commonwealth in Palestine tried very hard to please the imperator in Rome. Nero, for example, the man who enjoyed setting fire to his own city, and to the world, while playing the flute, or whatever.

Donald Trump is the present-day Nero, the imperator of the New Rome.

Trump’s main object in life is to get out of the Iran deal, “the worst deal ever”. Why? I have listened intently and have discerned no other reason than that the deal was forged by his hated predecessor, Barack Obama.

What other reason was there for annulling the deal? I have heard none. The deal stopped Iran from proceeding with the building of a nuclear weapon. All experts, without exception (even in Israel) confirm that Iran has scrupulously adhered to its commitment.

Indeed, the entire world outside the US (and Israel, of course) has now decided to go on with the deal. Germany, France and Britain, three not quite insignificant powers, believe that the deal has to be maintained. So do Russia and China, no tiny countries, either.

Most people in Israel now believe that Binyamin Netanyahu, Bibi the Great, is really leading Trump on a leash. Bibi has such a magical hold over Trump, that the American president has to follow Israel’s lead.

Bibi is obsessed with Iran. He wakes up in the morning with Iran and goes to sleep with Iran. Nobody seems to ask: Why, for God’s sake?

Proof: not so long ago, well within my lifetime, Iran was Israel’s closest ally (except our American vassal, of course). Iran was governed by the Shah, with his beautiful uniform and his beautiful wife (please indulge me for once, dear feminists).

Israel and Iran went to steal chickens together, as we say. The Iranians helped us to infiltrate agents into the Kurdish region of Iraq, in order to make trouble for the Iraqi dictator, Saddam Hussein. Later, we supported Iran in its war against Iraq, started by the same Hussein.

In one of the greatest scandals of its time, the so-called Iran-Contra affair, Israel transferred American arms to Iran. (Iran paid for them, and the Americans used the money to illegally finance the “Contra'” war against the leftist government in Nicaragua. My friend Amiram Nir, a journalist turned government security advisor, personally delivered the arms to Tehran. (His US counterpart, Oliver North, has just been appointed to head the powerful American Rifle Association.)

Enough amusing anecdotes. There is no basic antagonism, dictated by geography, between our two nations. So what is it?

Well, there is ideology. The present rulers of Iran are extreme Shia Islamists. They want to become the overlords of the Arab Muslim world. The Arabs hate Israel, mainly because of the Israeli occupation of Palestine. So the Iranians pretend to be the great enemy of the “Little Satan” (their rather insulting appellation of Israel, to distinguish it from the Great Satan, the USA).

Frankly, I think that the rulers of Iran don’t give a damn about Israel, except as an useful instrument. The hatred of Israel is a weapon in the battle with the Sunni Arab world, led by the hyper-active Saudi Crown Prince.

(The conflict between Sunni and Shia goes back almost to the times of the Prophet, more than 15 centuries ago.)

So why is Bibi obsessed with Iran, to such an extent that he commands his American vassal to drive towards World War III? Depends how cynical you are.

If you are very cynical, you might well say that both Trump and Bibi are up to their respective necks in criminal investigations. With a bit of luck, both might end up in prison.

The US is still far from war with Iran but we are not. Perhaps we are already in it, without believing it. 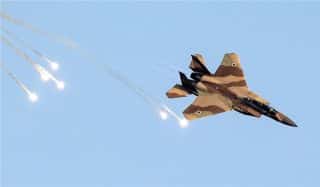 These days – or should I say, these nights – our brave boys fly over Syria and bomb Iranian army installations there. Until this minute, the Iranians have not reacted, except for a feeble attempt that was quickly answered by a massive Israeli air strike.

Why are Iranians there in the first place? It is a part of their objective to create an Iranian sphere of influence extending from Iran proper to the Mediterranean Sea. In Iraq, which has a large Shia population, they are already dominant. With the help of Russia, they are now almost dominant in Syria. In Lebanon their close allies, the Shia Hizbollah movement, controls a large part of the country and has just won the elections.

The US does not like this at all. True, Trump has decided to withdraw from the Middle East (costs too much money), but he does not want the void to be filled by Vladimir Putin. Not at all. So he sends his boys back, and tells Israel to make the life of the Iranians in Syria hell.

It is playing with fire (for us). Until now, the Iranians have limited their reaction to our nightly bombing of their forces to the utterance of dire threats and the ineffectual response this week. But for how much longer?

Iran is a wise country. Whatever the bluster of the present regime, it does exercise a lot of restraint. It remembers that quite recently (just about 2500 years ago) it was a world power. It can wait. It does not satisfy Trump’s expectations. After all, how long does the USA exist?

So we bomb. So they react with threats. So Trump is happy. 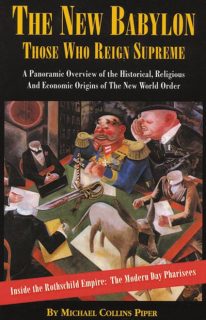 And the Israeli public? One may wonder: is there such a thing? Some local commentators are already asking: have Israeli citizens turned into mere subjects?

Israel is obviously on the path to war. The nightly bombing of Iranian forces is an insult to their national pride. In our region, national pride plays a large role. Our army has told the population in the north of the country to open the air-raid shelters and prepare them for use. Large anti-aircraft forces have been moved to the Syrian frontier.

And the Israelis? They shrug their shoulders. They know that Bibi is a showman of genius. Just now he has held the country and the world in thrall with a superb TV demonstration, in which he revealed a wealth of information about Iran’s nuclear activities. The brave boys and girls of the Mossad stole this trove in Teheran and brought it to Israel, risking their lives.

Wonderful. Except that it turned out that this trove consists of obsolete documents from before the deal, which show what everybody already knew: that Iran wanted to emulate Israel and produce its own nuclear bomb. [ Editor’s note: VT readers suspect this is highly disputable, as the facts may not bear this out. ]

It was to prevent this that the nuclear deal was initiated in the first place.

But what showmanship! What a stage set! What wonderful (American) English! What perfect coordination with Trump’s decision to scuttle the deal! Can it be that the entire show was ordered by Trump?

Some Israeli commentators pointed all this out. But there is no real opposition to Bibi in the Knesset, the popular press or on TV.

The vast majority of the people in Israel – and everywhere else – stand at attention when the word “security” is mentioned. OK, Bibi may be a tiny bit corrupt, he may have taken some bribes here and there, but he is our commander-in-chief! He is sending our boys into battle! So hail to the Chief! Hail Bibi!