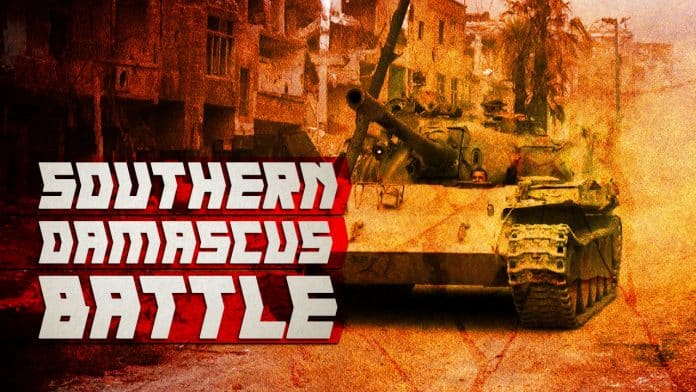 Following a full liberation of Beit Sahm, Babbila, Sidi Miqdad and Yelda in southern Damascus, Syrian government forces have focused their efforts on combating ISIS in the Yarmouk refugee camp, Taqaddom and in the northern part of al-Hajar al-Aswad.

The Syrian Arab Army (SAA), Liwa al-Quds, the Palestinian Liberation Army and other pro-government factions have liberated the Educational Development Center, the Assad Bin Al-Furat school, the UNRWA school, the Jazeera roundabout and multiple nearby points in al-Hajar al-Aswad from ISIS. Currently, the main clashes between government troops and ISIS members are ongoing near the town hall.

At the same time, the Syrian Air Force has also stepped up its bombing campaign against the remaining ISIS fortifications in the area.

According to the ISIS-linked news agency Amaq, 38 SAA soldiers have recently died in the recent clashes in southern Damascus.

At the same time, units of the Russian Military Police have started patrolling Beit Sahm, Babbila, Sidi Miqdad and Yelda. Earlier, 8,467 people, including 3,283 members of opposition armed groups and 5,184 members of their families, were moved from the aforementioned districts to the militant-held parts of the provinces of Aleppo and Idlib in the framework of a reconciliation agreement reached between militants and the government.

Russian forces have also conducted a reconnaissance mission in government-held areas in southwestern Aleppo and southeastern Idlib visiting the villages of Tell Maraq and Umm Sehrij. According to the Syrian newspaper al-Watan, the Russian military is planning to establish several observation posts in these areas to monitor the de-escalation zones agreed by Russia, Iran and Turkey during the Astana talks.

Turkish observation posts already exist in al-Eis in southwestern Aleppo and in Tell Tuqan and Sarman in southeastern Idlib.

The key issue which remains unclear is the control of the town of Jisr al-Shughur and the al-Ghab plains. These areas are currently in the hands of Hayat Tahrir al-Sham (formerly Jabhat al-Nusra, the Syrian branch of al-Qaeda). Hayat Tahrir al-Sham is excluded from the de-escalation zones agreement. However, Turkey and its proxies have contributed no efforts to combat the terrorist group in western Syria. So, the SAA and its allies will have to deal with it ignoring Ankara’s attempts to keep the current status quo in the area.

On May 13, a fifth batch of militants and their families withdrew from the Rastan pocket in northern Homs to the province of Idlib. The batch consisted of 1,500 people. According to the Syrian Observatory for Human Rights (SOHR), more than 13,000 militants and civilians had withdrawn from the Rastan area to the militant-held parts of Idlib and Aleppo provinces.

It should be noted that a radical part of militants in the Hula is still rejecting the reconciliation agreement. If the situation remains the same, the SAA and the Tiger Forces will be forced to solve this issue via military actions.

The US-backed Syrian Democratic Forces (SDF) have continued their operation against ISIS on the eastern bank of the Euphrates Valley. Recently, the US-backed force has reached the area north of the government-held town of al-Bukamal and captured the village of Baghuz Tahtani.