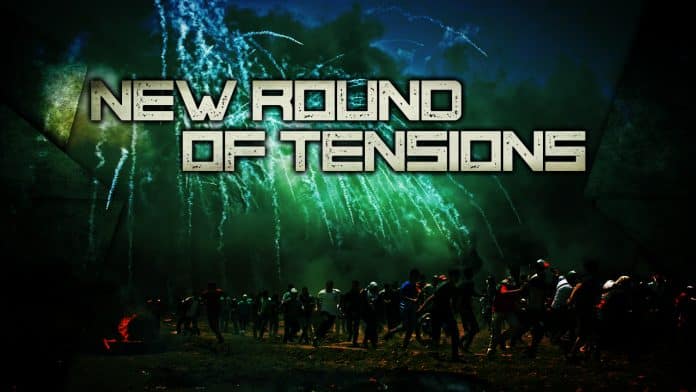 At least 59 Palestinian protesters were killed and 2,771 were injured by Israeli forces near the so-called security fence in the Gaza Strip during the May 14 demonstrations denouncing the opening of the US embassy in Jerusalem.

Various sources provide conflicting numbers of people involved in the protests, but all of them agrees that there were at least 35,000-40,000 people at the security fence and in the nearby area.

Israeli Prime Minister Benjamin Netanyahu described the Israeli actions as self-defense against the Palestinian movement Hamas, which “intends to destroy Israel and sends thousands to breach the border fence in order to achieve this goal,” according to his remarks.

Education Minister Naftali Bennett told Israel Radio that the Israeli government will treat any person approaching the fence as a “terrorist”.

US President Donald Trump called May 14 a “big day” for Israel while White House spokesperson Raj Shah claimed that Hamas had provoked the Israeli actions.

It should be noted that there has been an ongoing wave of protests since President Trump’s official decision on December 6, 2017 to recognize Jerusalem as the capital of Israel. Since then, the already complicated Palestinian-Israeli relations have deteriorated further.

The Palestinian government denounced the May 14 violence as a “terrible massacre” perpetrated “by the forces of the Israeli occupation” and called on the international community to intervene to stop the violence.

The US-Israeli actions faced a cold response on the international level. For example, Turkish President Recep Tayyip Erdogan once again described Israel as a “terrorist state” while Iran’s parliament speaker Ali Larijani said that Israeli actions will not go unanswered.

On May 15, a new round of protests erupted across the Palestinian areas. The protests mark the 70th anniversary of Nakba Day (Day of Catastrophe), when Israel was created.

On May 14, Hezbollah leader Sayyed Hassan Nasrallah said the May 10 missile attack on military targets in the Israeli-occupied Golan Heights had marked the start of a “completely new stage” of the conflict.

Nasrallah said that 55 missiles had been launched from Syrian territory at Israeli targets and advised Israel to stop its acts of aggression or it will face stinging retaliation. He also dismissed Israeli claims about the number of casualties and extent of damage in the aftermath of the May 10 encounter saying that Israel attempts to conceal its failures through such lies.

In Syria itself, government forces have continued their operations across the country. In the Rastan pocket in northern Homs, an evacuation of militants is still ongoing. On May 14, 122 buses transporting militants and their families left the area. On May 15, a new batch will be leaving.

In the Yarmouk refugee camp area in southern Damascus, the Syrian Arab Army and its allies have liberated Quds Mosque and nearby buildings.

This advance is part of a wider push by government forces to re-capture the western part of the Yarmouk refugee camp from the terrorist group and to shorten the frontline in the western and southern parts of the pocket.