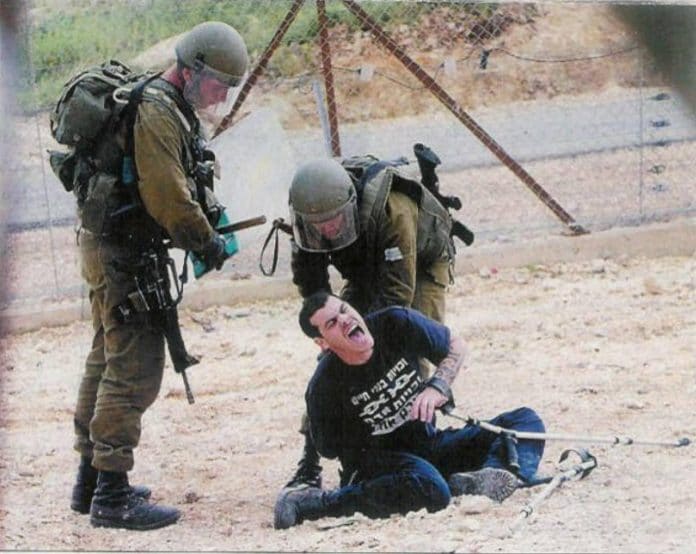 [ Editor’s note:  From fake news to false flag terrorism, the White House, as voiced by clandestine spokesman and Israeli citizen, Ari Fleischer, now enters the world of blaming others for what they do.

It isn’t like we all don’t know that Trump has attacked Syria twice over fake gas attacks, long proven, with the US repeatedly blocking UN presentations on this by Russia and Syria.

To protect itself, the US has left the Geneva Convention and International Criminal Court, as Gina Haspel and her underlings would face a tribunal that might make Nuremberg look like child’s play.

This week, the US has bombed civilians in Syria, killing two dozen, and covertly in Yemen, supplying cluster bombs, mission planning and refueling, in support of al Qaeda/Saudi moves to overthrow an elected government supported by a majority of the population.

Most recently, the US has been collecting jihadists bussed out of Syria under reconciliation agreements and has offered them cash to fight as al Qaeda in Afghanistan. Many have families and are reluctant to get on the US c130 aircraft for Baghram and Kandahar.

There they are trained by Israeli, British and Indian special forces and deployed against Afghanistan, Pakistan and Iran.

Some work security for drug smuggling into the CIS republics to the North, while others take processed heroin from the US facilities in Helmand to air strips across the border into Baluchistan.

I wouldn’t know this unless, of course, I talked to US Navy SEALs who worked in this program under Eric Prince (Prins, as he is a neighbor) and Dick DeVos of Blackwater.

Anyway, on to Trump and Fleischer. Perhaps it’s time we brought up Israel’s role in 9/11, and why absolute control of media is needed to suppress the leaks that VT has published so many times.

This year, the Houston grand jury’s gag order on the real investigation comes to an end; and those with real data on Israel and nuclear 9/11 are looking for publishers. If Americans finally learn what was done to them, it will take more than fake biblical crap to protect the Jewish state.

But then again, some of us don’t think Americans can handle the truth. ]

Former White House press secretary Ari Fleischer shared a video of a protester with crutches running from the deadly Israeli crackdown at the Gaza border, as an example of Palestinian propaganda he accused media of falling for.

“The media always falls for it,” Fleischer wrote in his tweet, sharing a video by an ultra-Orthodox Israeli Behadre Haredim reporter, Yanki Farber. Fleischer, who was the spokesman to George W. Bush, went on to accuse media of loving the “Palestinian narrative” about the unreasonable Israeli violence “so much they never learn a lesson.” Farber, who also runs the account ‘Israel & USA forever,’ went as far as to call all Gaza protesters “terrorists.”

The media always falls for it. https://t.co/vLV3h3yARq

While exposing an apparent attempt to manipulate public sentiment, Fleischer’s comment does not change the fact that Monday has become one of the deadliest days in recent Israeli-Palestinian history, with 60 killed and nearly 3,000 injured at the Gaza border.

From the very onset, the Israeli Defense Forces (IDF) have responded to the six-week Palestinian protests in Gaza with significant force. On March 30, the first day of the Great Return March protests, more than 10 people were killed and hundreds were injured by live ammunition, rubber bullets and tear gas.

So, a man with crutches started running, ergo palestinian suffering is a farce. I love it when I find anecdotal evidence on twitter that just shatters everything I know about anything. I definitely feel “much smarter” now.

When you have no argument for shooting down unarmed protesters…

So – you are saying that over 55 people that were killed yesterday- were all FAKED???? And, that the use of lethal force against unarmed protestors who could not have climbed the fence anyway, is how to handle this situation????? You are a jackass and soulless, ARI! pic.twitter.com/Ab6D41a3ep

Who fell for what? C’mon Ari, indicting the entire press for one man’s unrelated ruse is beneath you.

“Yesterday we saw 30,000 people; we arrived prepared and with precise reinforcements. Nothing was carried out uncontrolled; everything was accurate and measured and we know where every bullet landed,” IDF tweeted on March 31, though that tweet has since been deleted.

Human Rights Watch concluded Israeli forces were “acting on orders that all but ensured a bloody military response to the Palestinian demonstrations,” the result of which was “foreseeable deaths and injuries of demonstrators… who posed no imminent threat to life.”

In an April interview with Kan radio, Israeli Brigadier-General Zvika Fogel confirmed snipers that shoot at minors at the fence are doing so deliberately, under specific orders.

At least he wasn’t responsible for any sniper fire that resulted in over 50 fatalities, hey?!

Ari, you are using this one bit as a tool. Legitimately over 45 people were killed, at least one was under the age of 8, the overwhelming majority were not armed. If I were on crutches with an injury, I might find a way to run to save my life as well. YOU are a cold heart.

“It is not the whim of one or the other sniper who identifies the small body of a child now and decides he’ll shoot. Someone marks the target for him very well and tells him exactly why one has to shoot and what the threat is from that individual.” he said. “And to my great sorrow, sometimes when you shoot at a small body and you intended to hit his arm or shoulder, it goes even higher.”

In the weeks since, Israel has killed more than 100 protesting Palestinians. While it calls them dangerous rioters and terrorists, and blames Hamas for their deaths, it is undeniable that children, journalists and disabled Palestinians often end up among the dead.

Some documented examples include journalist Yasser Murtaja and 15-year-old Muhammad Ibrahim Ayyoub, whose death prompted an EU call for an investigation. Defense Minister Avigdor Lieberman said Ayyoub’s death was the fault of Hamas, as Gazans had been warned not to approach the fence.

Even before the Great Return March took place, a double amputee Ibrahim Abu Thurayeh was killed at protests over Trump’s embassy announcement in December.  The IDF’s investigation found “no moral or professional failures” in the incident and insisted Thurayeh wasn’t fired at.

Though the video Fleischer retweeted shows a Palestinian pretending to need crutches, a large number of disabled people and amputees actually reside in Gaza. The 2014 war in Gaza alone created about 100 new amputees, according to ReliefWeb. The UN estimates that 2,200 Palestinians were killed in the conflict, including 1,492 civilians and 605 militants, while 123 remain ‘unverified.’

‘No moral failures’: IDF finds no wrongdoing in death of disabled Palestinian as UN urges probe

Cases of children becoming collateral victims of Israeli war on Palestinian terrorism are also well documented. During the 2014 war on Gaza, the world was horrified when journalists witnessed the IDF killing four children playing on the beach with a missile fired from a gunboat. The IDF found absolved itself of any blame, saying the crew of the boat thought the children, ranging in age from 9 to 11, were Hamas fighters. Three of the children were killed as they ran away, after the first child was killed.

Israel is promoting the so-called “Pallywood” narrative that dismisses videos of IDF abuse as controversial and fake, to discount potential evidence of violence against Palestinians. While it is evident that a percentage of videos shared on social media are being manipulated to catch greater attention of western media, they don’t cancel out the reality that Israel’s treatment of Palestinians is problematic and includes vivid examples of violations of human rights. 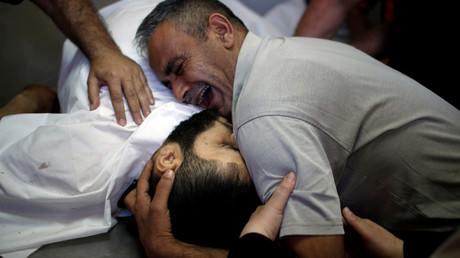 Like ‘Nazis who died in WWII’: Israeli minister dismisses victims of Gaza protests 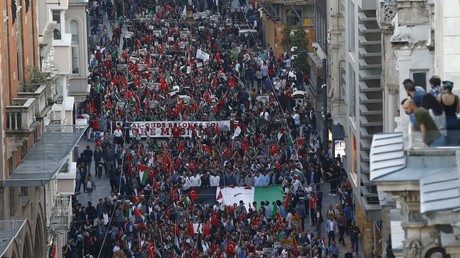 ‘This is state terror’: Foes & allies criticize Israel over use of force in wake of embassy move 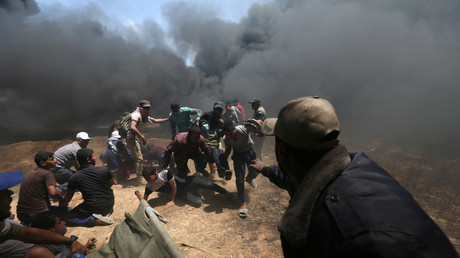 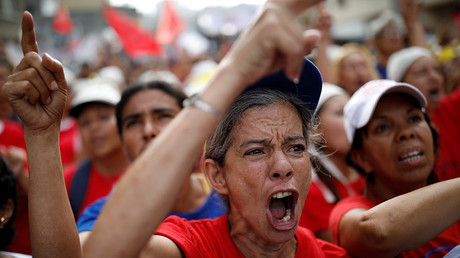 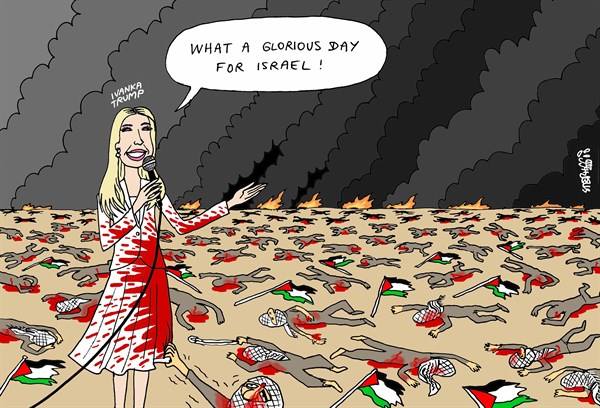