Journalist Ted Snider has recently fleshed out ten lies that the Israeli regime and the Trump administration are currently perpetuating about Iran. They are worth listing here.

Lie # 1: “The Iranian regime is the leading state sponsor of terror.”

Lie # 3: “Over the years, Iran and its proxies have bombed American Embassies and military installations, murdered hundreds of American service members, and kidnapped, imprisoned, and tortured American citizens.”

Lie # 4: “No action taken by the regime has been more dangerous than its pursuit of nuclear weapons – and the means of delivering them.”

Lie # 5: “The deal lifted crippling economic sanctions on Iran in exchange for very weak limits on the regime’s nuclear activity.”

Lie # 6: “The deal lifted crippling economic sanctions on Iran . . .. at the point when the United States had maximum leverage.”

Lie # 7: “Today, we have definitive proof that this Iranian promise was a lie. Last week, Israel published intelligence documents – long concealed by Iran – conclusively showing the Iranian regime and its history of pursuing nuclear weapons.”

Lie # 8: “The agreement was so poorly negotiated that even if Iran fully complies, the regime can still be on the verge of a nuclear breakout in just a short period of time. The deal’s sunset provisions are totally unacceptable.”

Lie # 9: “Making matters worse, the deal’s inspection provisions lack adequate mechanisms to prevent, detect, and punish cheating and don’t even have the unqualified right to inspect many important locations, including military facilities.”

Lie # 10: “Not only does the deal fail to halt Iran’s nuclear ambitions, but it also fails to address the regime’s development of ballistic missiles that could deliver nuclear warheads.” 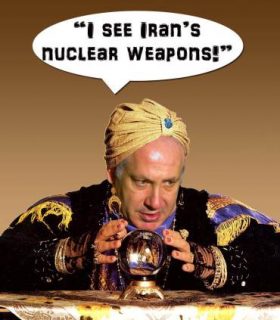 Not a single of these lies has been challenged by the major Zionist outlets out there. They have all repeated the Israeli narrative without question, without qualification, and without sober thought.

The simple and inescapable fact is Israel’s colossal aggression against the Palestinians is well known among Jewish academics and reputable scholars,[1] but the Zionist regime in Israel has convinced the Western world that the true enemy of the world is Iran, while simultaneously planning, by May 2010, to place a permanent submarine station carrying nuclear cruise missiles in the Persian Gulf.[2]

But get this. Some Neoconservatives even blamed the 2008 economic crash on terrorists and parties outside the United States! Kevin D. Freeman, the author of “Economic Warfare: Risks and Responses,” declares that “a three-phased attack was planned and is in the process against the United States economy.”[3]

Bill Gertz of the Washington Times reports, “While economic analysts and a final report from the federal government’s Financial Crisis Inquiry Commission blame the crash on such economic factors as high-risk mortgage lending practices and poor federal regulation and supervision, the Pentagon contractor adds a new element: ‘outside forces,’ a factor the commission did not examine.”[4]

These “outside forces” include Islamic terrorists, the Chinese military, Russia, Venezuela, and Iran. Where is the evidence for these spurious notions? You see what’s going on here? These people are engaged in committing murderous and bloody crimes all over the Middle East, but then they just turn around and blame other countries or “outside forces” for.

What we are seeing here is that our politicians are in the pockets of the Israelis and Jewish billionaires like Sheldon Adelson. Adelson in particular has recently donated at least $30 million “to GOP congressional bids.”[5]