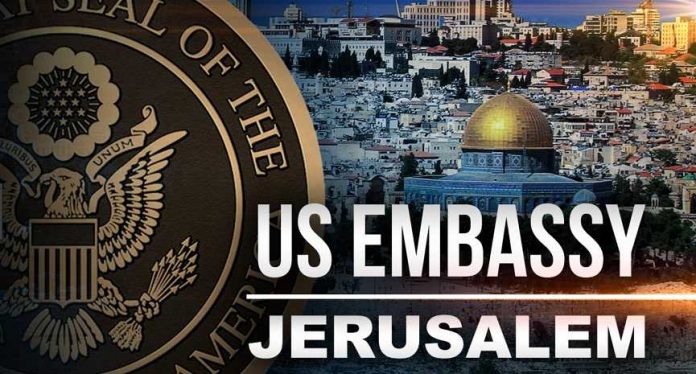 by Uri Avnery, … with Gush Shalom

[ Editor’s note: Uri does below what I was doing in Iran last week, explaining that the pitiful lack of reaction from Christians and Muslims over the Al-Quds US embassy move was a disgrace, because the Israelis had always said they were eventually going to take it.

But from the public non-response, we saw that no plan was ever created to garner world attention. The Pope was missing in action, and so was Rouhani.

I made this failure part of my talk, and noting that getting caught flatfooted will never be forgotten, that it was water under the bridge; but now we must see if we can learn from past mistakes, or if changes in leadership are needed, including the Pope.

David Lawley Wakelin, who I was on a speaking tour with in Bandar Abbas, closed his talk by urging those present (most events were religious groups with imams in the front row) to march to their Parliamentary representatives’ offices after Friday prayers to demand that Rouhani do more. We were always warmly thanked when leaving, but do not know yet if they followed Wakelin’s advice.

With Uri’s article today we learn that not even Israelis are immune to this worldwide public stand down in protesting almost any major horrible event; it’s like a mass hypnosis has set in, or is it mass cowardice?

Note how Uri twists his knife by mentioning how hundreds of thousands of Israelis had once protested the price of cottage cheese. And, you just can’t make this stuff up… Jim W. Dean ]

On Bloody Monday this week, when the number of Palestinian killed and wounded was rising by the hour, I asked myself: what would I have done if I had been a youngster of 15 in the Gaza Strip? My answer was, without hesitation: I would have stood near the border fence and demonstrated, risking my life and limbs every minute.

How am I so sure? Simple: I did the same when I was 15. I was a member of the National Military Organization (the “Irgun”), an armed underground group labeled “terrorist”.

Palestine was at the time under British occupation (called “mandate”). In May 1939, the British enacted a law limiting the right of Jews to acquire land. I received an order to be at a certain time at a certain spot near the sea shore of Tel Aviv in order to take part in a demonstration. I was to wait for a trumpet signal.

The trumpet sounded and we started the march down Allenby Road, then the city’s main street. Near the main synagogue, somebody climbed the stairs and delivered an inflammatory speech. Then we marched on, to the end of the street, where the offices of the British administration were located. There we sang the national anthem, “Hatikvah”, while some adult members set fire to the offices.

Suddenly several lorries carrying British soldiers screeched to a halt, and a salvo of shots rang out. The British fired over our heads, and we ran away.

Remembering this event 79 years later, it crossed my mind that the boys of Gaza are greater heroes then we were then. They did not run away. They stood their ground for hours, while the death toll rose to 61 and the number of those wounded by live ammunition to some 1500, in addition to 1000 affected by gas.

On that day, most TV stations in Israel and abroad split their screen. On the right, the events in Gaza. On the left, the inauguration of the US Embassy in Jerusalem.

In the 136th year of the Zionist-Palestinian war, that split screen is the picture of reality: the celebration in Jerusalem and the bloodbath in Gaza. Not on two different planets, not in two different continents, but hardly an hour’s drive apart.

The celebration in Jerusalem started as a silly event. A bunch of suited males, inflated with self-importance, celebrating – what, exactly? The symbolic movement of an office from one town to another.

Jerusalem is a major bone of contention. Everybody knows that there will be no peace, not now, not ever, without a compromise there. For every Palestinian, every Arab, every Muslim throughout the world, it is unthinkable to give up Jerusalem.

It is from there, according to Muslim tradition, that the Prophet Muhammad ascended to heaven, after tying his horse to the rock that is now the center of the holy places. After Mecca and Medina, Jerusalem is the third holiest place of Islam.

For the Jews, of course, Jerusalem means the place where, some 2000 years ago, there stood the temple built by King Herod, a cruel half-Jew. A remnant of an outer wall still stands there and is revered as the “Western Wall”. It used to be called the “Wailing Wall”, and is the holiest place of the Jews.

Statesmen have tried to square the circle and find a solution. The 1947 United Nations committee that decreed the partition of Palestine into an Arab and a Jewish state – a solution enthusiastically endorsed by the Jewish leadership – suggested separating Jerusalem from both states and constituting it as a separate unit within what was supposed to be in fact a kind of confederation.

The war of 1948 resulted in a divided city, the Eastern part was occupied by the Arab side (the Kingdom of Jordan) and the Western part became the capital of Israel. (My modest part was to fight in the battle for the road.)

The leader of the local Palestinians, Faisal al-Husseini, the scion of a most distinguished local Palestinian family and the son of a national hero who was killed not far from my position in the same battle, endorsed this formula publicly. Yasser Arafat gave me his tacit consent.

If President Donald Trump had declared West Jerusalem the capital of Israel and moved his embassy there, almost nobody would have got excited. By omitting the word “West”, Trump ignited a fire. Perhaps without realizing what he was doing, and probably not giving a damn.

For me, the moving of the US embassy means nothing. It is a symbolic act that does not change reality. If and when peace does come, no one will care about some stupid act of a half-forgotten US president. Inshallah. 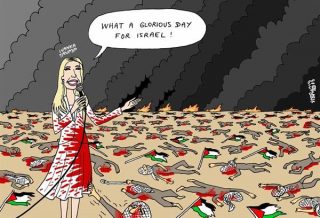 So there they were, this bunch of self-important nobodies, Israelis, Americans and those in-between, having their little festival, while rivers of blood were flowing in Gaza. Human beings were killed by the dozen and wounded by the thousand.

The ceremony started as a cynical meeting, which quickly became grotesque, and ended in being sinister. Nero fiddling while Rome was burning.

When the last hug was exchanged and the last compliment paid (especially to the graceful Ivanka), Gaza remained what it was – a huge concentration camp with severely overcrowded hospitals, lacking medicines and food, drinkable water and electricity.

A ridiculous world-wide propaganda campaign was let loose to counter the world-wide condemnation. For example: the story that the terrorist Hamas had compelled the Gazans to go and demonstrate – as if anyone could be compelled to risk their life in a demonstration.

Or: the story that Hamas paid every demonstrator 50 dollars. Would you risk your life for 50 dollars? Would anybody?

Or: The soldiers had no choice but to kill them, because they were storming the border fence. Actually, no one did so – the huge concentration of Israeli army brigades would have easily prevented it without shooting. 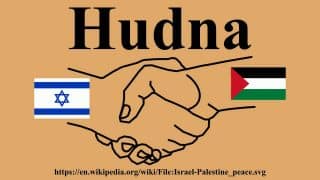 Almost forgotten was a small news item from the days before: Hamas had discreetly offered a Hudna for ten years. A Hudna is a sacred armistice, never to be broken. The Crusaders, our remote predecessors, had many Hudnas with their Arab enemies during their 200-year stay here.

So why were the soldiers ordered to kill? It is the same logic that has animated countless occupation regimes throughout history: make the “natives” so afraid that they will give up. Alas, the results have almost always been the very opposite: the oppressed have become more hardened, more resolute. This is happening now.

Bloody Monday may well be seen in future as the day when the Palestinians regained their national pride, their will to stand up and fight for their independence.

My conscience does not allow me to conclude this without some self-criticism. I would have expected that all of Israel’s renowned writers would publish a thundering joint condemnation while the shooting was still going on. It did not happen.

The political “opposition” was contemptible. No word from the Labor party. No word from Ya’ir Lapid. The new leader of the Meretz party, Esther Sandberg, did at least boycott the Jerusalem celebration. Labor and Lapid did not even do that.

I would have expected that the dozens of our brave peace organizations would unite in a dramatic act of condemnation, an act that would arouse the world. It did not happen. Perhaps they were in a state of shock.

The next day, the excellent boys and girls of the peace groups demonstrated opposite the Likud office in Tel Aviv. Some 500 took part. Far, far from the hundreds of thousands who demonstrated some years ago against the price of cottage cheese.

In short: we did not do our duty. I accuse myself as much as I accuse everybody else. We must prepare at once for the next atrocity. We must organize for mass action now!

But what topped everything was the huge machine of brain-washing that was set in motion. For many years I have not experienced anything like it.

Almost all the so-called “military correspondents” acted like army propaganda agents. Day by day they helped the army to spread lies and falsifications. The public had no alternative but to believe every word. Nobody told them otherwise.

The same is true for almost all other means of communication, program presenters, announcers and correspondents. They willingly became government liars. Probably many of them were ordered to do so by their bosses. Not a glorious chapter.

After the day of blood, when the army was faced with world condemnation and had to stop shooting (“only” killing two unarmed demonstrators) all Israeli media were united in declaring this a great Israeli victory.

Israel had to open the crossings and send food and medicines to Gaza. Egypt had to open its Gaza crossing and accept many hundreds of wounded for operations and other treatment.

The Day of Shame has passed. Until the next time.