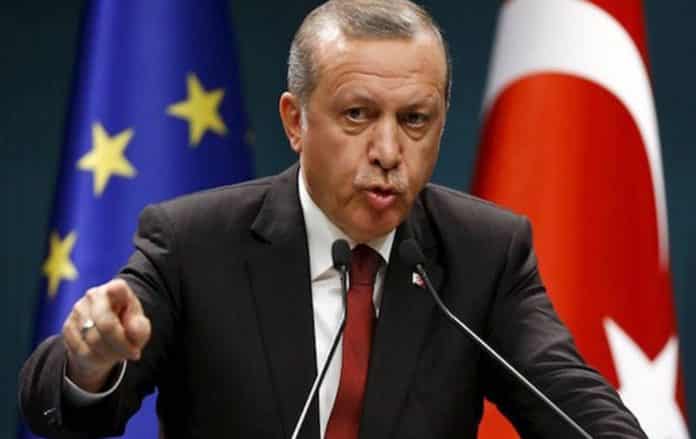 [ Editor’s note:  Time to tell a story:  The United States currently has 82 nuclear weapons on Turkish soil. Despite that, in 2016, the US tried to overthrow the Turkish government, working closely with Israel, despite the fact that Turkey was actively, at the time, cooperating with both the US and Israel along with Saudi Arabia to bring down Assad, Hezbollah, Iran and remove Russia from the area.

We also know, from sources in Washington, that Turkey is being investigated for its role in aiding Donald Trump’s election, through funding by Turkish intelligence of a massive anti-Hillary smear campaign, coordinated with Israel and Julian Assange, run from Veles, Macedonia.

Since that time, it seems Turkey may well have awakened, and now recognizes that playing it safe by hanging out with the US and Israel isn’t going to work.

We have confirmations on the ground, that attempts to assassinate Erdogan will be made. He just locked up 104 Turkish Air Force officers for life, for working against him with Israel.

As some know, VT has moved its Middle East hq from Damascus to Istanbul. There we are getting everything. When Syria fails to fall, Turkey is next, a bigger target than Iran.

We are seeing the Wolfowitz/Bush/Cheney/Rumsfeld act played out again with Puppet Trump; the conquest of the entire region – puppet governments, military occupation, drugs and human trafficking, the same fake world that was supposed to be under the “New World Order” promised by the banks after the war they started in August 1914, second stage of course – came to a temporary end.

Turkish President Recep Tayyip Erdogan has argued that those countries with nuclear weapons calling nuclear power plants a threat do not trust the world community.

Speaking at an Iftar dinner for the Muslim holy month of Ramadan, Turkish President Recep Tayyip Erdogan specifically focused on the issue of nuclear proliferation.

“Those who have more than 15,000 nuclear warheads are currently threatening the world,” he pointed out.

According to him, “the countries with nuclear weapons, that portray nuclear power stations as threats, have no credibility in the international community.”

Touching upon the Joint Comprehensive Plan of Action (JCPOA), also known as the Iran nuclear deal, Erdogan said Ankara does not “accept re-igniting issues” and that the deal has been “put to bed.”

“We find the other signatories stating their loyalty to the agreement in the face of the US administration’s decision very positive,” he underscored.

US Secretary of State Mike Pompeo, earlier this week warned that the “sting of sanctions” will not ease until Iran changes its course, saying that the new sanctions against Tehran will be the “strongest in history.”

On May 8, US President Donald Trump announced his decision to withdraw the United States from the Iran nuclear deal, also known as the Joint Comprehensive Plan of Action (JCPOA). He also promised to reinstate the sanctions against Iran that were lifted as a result of the agreement.

In March, Turkish Deputy Prime Minister Bekir Bozdag rejected media reports about US plans to allegedly withdraw its troops from the Incirlik airbase in southern Turkey, where US nuclear-capable bombers are deployed.The European Union and the P5+1 group of countries, including China, Germany, France, Russia, the UK and the US, signed the JCPOA with Iran on June 14, 2015. Shortly after, the Turkish Foreign Ministry hailed the P5+1 clinching the deal, expressing hope that it “will bring peace, security and stability to the region.”