The other story, VT editor’s notes and some revealing facts:

This interview from Russia Today. A secondary conspiracy emerged when I showed up a few months later 70 pound lighter. Watch the Russia Today interview, then review the photo below, taken hours ago, of ICBMs launched at sea and their contrail some time later even in moderate to high winds. 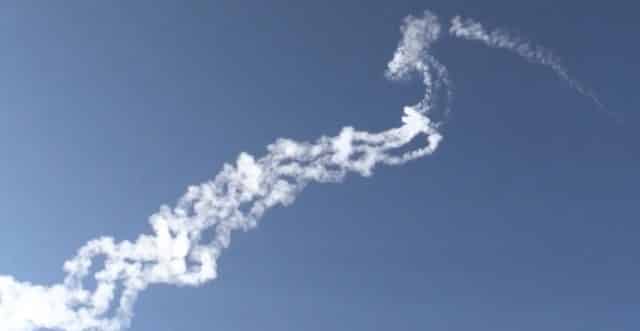 More or less, our real story is always, it seems, Facebook and Google censoring.

They go further, promoting intelligence operations against the US, Russia, Iran and Syria on behalf of Israel.

That is why they exist. And that is why – with partner organizations that totally control the internet, social media, all search engines and the largest mass of data on every individual in the world – these groups need to be put under tight supervision and control by international monitors.

Google alone is more dangerous than any nuclear weapon.

In the 2014 MH17 shoot down, Google cleaned the internet of photos and video that supported Kiev shooting down the airliner; and they edited or “washed” dozens of key sites of aircraft performance data, and data on radar spoofing.

This was done during an 8-hour period to sell Russia’s guilt, as Google did with Skripal and the Gouta gas attacks, always something done by Israel or their terror allies, often as not targeting Russia and always a false flag.

The RT story today, the basis for the photo above:

“The Russian Defense Ministry has released footage of a Borei-class submarine firing a barrage of four Bulava missiles – the first such test for this type of submarine. The test was conducted on Tuesday in the White Sea.

The video published on Wednesday shows some pre-launch activities on board the Yuriy Dolgorukiy, the lead of the project. Then the submarine is shown firing four Bulava missiles at a test range in Kamchatka in quick succession.

Previous tests of the weapon were conducted solo or in barrages of two on two occasions. Firing missiles in a barrage is more challenging for the crew and ship, but reduces the time the submarine stays close to the surface exposed to detection and possible attack.Russia currently has three Borei-class nuclear submarines in active service and a fourth upgraded ship – the Knyaz Vladimir, undergoing trial. Four more are being built. Each can carry 16 Bulava SLBMs, which have a reported range of up to 11,000km and can carry up to six nuclear warheads.”

So Far, the Winner is ICTS and Schipol Airport, “Crotch Bomber” Redux

Note from VT: Ukrainian Prosecutor-General Vitaly Yarema told Ukrainian Pravda newspaper on Friday, “Militias in the self-proclaimed Donetsk and Luhansk people’s republics do not have Ukrainian air defense missile systems Buk and S-300 at their disposal”…”After the passenger airliner was downed, the military reported to the president that terrorists do not have our air defense missile systems Buk and S-300,” the general prosecutor said. “These weapons were not seized.”

“The Russians did it” story has crashed and burned. The the media overkill…”killed it”, all of them playing off the same talking points notes, no one even bothering to ask the most basic investigative journalist questions like “Show me the evidence you have.”

Who do you know, what country, that has a track record of pulling that kind of media and sock puppet politician coordination off whenever they want to, having them all singing like they are in a choir?

The BUK is off the table. We have reviewed it extensively and an S300 is capable but not a BUK. It “says” it will do it but experts have ruled otherwise. We have tons of supporting material already.

Additionally, were a ground launched missile used, we would have had sat photos already. If we get them later, it will mean they have been cooked.

This plane is intact. Ours would have fallen in pieces based on wreckage.

Human intel on the ground has given us much. We are taking our time and want more. The YouTube is very telling, engine on fire. However, the wreckage indicates bomb thus far. We, however, aren’t interested in guessing ourselves to death. We leave that to the slime media.

We are also looking for an AWAC in the area. The bomb or whatever would have needed an AWAC or an F15 with advanced radar to time the crash.

Thus far the Putin assassination story that RT ran seems “off.” We can do nothing with it so we won’t deal with it now.

What can’t be ignored is the manipulated media and the politicians who are making asses of themselves. They are pointing a gun right at Israel. The smell is overwhelming. Next, someone will ask how many Jews were onboard. As the plane was leaving the Netherlands for a medical conference, I would think the number to be substantial, 20 or more. Is this a fair way to look at this? Perhaps that should be discussed as well.

And who would destroy two fully packed airliners of a country they were angry with, to make an example? Is this enough to go on? In reality, it is more powerful, following a cover up, than any other evidence. Everything else can be faked. The “stupidity” is for real. Yes, they are that stupid.

The dead want vengeance – and we aim to please.