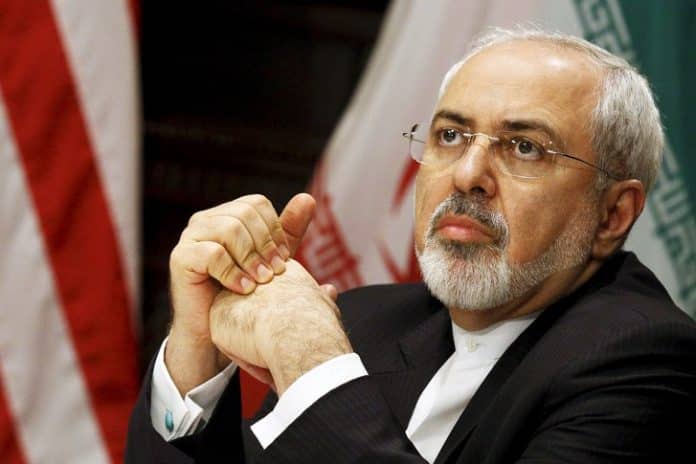 [ Editor’s Note: Zarif has wandered into fertile ground with his US corruption charges today, not so much because they are true, but because the American people are being victimized by them also, not just Iran; but most Americans have not figured that out yet.

The litany of lies spewed out by an ex-Army officer, politician, CIA director and now Secretary of State Pompeo, set a new low in American diplomacy. He out did Trump in that his 12-demand tirade against Iran was like a compilation of Trump’s silliest tweets.

Election interference in the US has been staring us in the face for a long time. Big money, either from major corporations wanting business incentives passed, the military industrial complex wanting its wheels continually oiled, or the colonial-era Arab tribes using their huge oil wealth to buy international politicians like the streetwalkers they offer themselves as.

Organized crime has become a routine source of campaign funding for our current class of political hoodlums. It does not take much imagination to see that some foreign scapegoats must be set up to focus public attention on, behind which the politico-gangster relationship can remain in the shadows.

Media control is an absolute necessity, where the Israel lobby is able to wield huge influence not only over government, but these major industries who cannot conduct espionage and blackmail operations in the US with sovereign immunity. Israel can, and does conduct it.

So far we are not seeing much blowback from the Democratic Party. Obama and Kerry have had nothing to say, or any of the big names in their administration, despite this being a foreign policy election issue in the midterm election this autumn. Someone is asleep at the wheel.

Add to that the growing isolation of the US, as it slides from leadership into “we are going to tell you what the deal is”, it is a made-to-order midterm election issue. What is holding the Dems back? I think it is Israel, not wanting to “offend” those that want funding and not wanting to be put on the doo doo media list. Welcome to the new America … Jim W. Dean ]

Iran’s foreign minister says American officials are prisoners to their “pipe dreams” and “corrupt” pressure groups in drawing up their foreign policy agenda, describing this as a sign of Washington’s “bankruptcy.”

Mohammad Javad Zarif was speaking to reporters on Wednesday in reaction to recent remarks by US Secretary of State Mike Pompeo, who unveiled a 12-point list of demands from Iran and threatened the country with the “strongest sanctions in history” if Tehran fails to fulfill them.

Zarif said, “Mr. Pompeo’s remarks were so groundless and bereft of civility and logic that do not warrant an answer.”

He said Pompeo and the other people in charge of the current US administration are prisoners “not only to their fallacious conceptions and pipe dreams, but also prisoners to [what happened in] the past, and worst of all prisoners to corrupt pressure groups.”

“This indicates the bankrupt nature of US foreign policy, which has been put up for rent. Any pressure group that spends more money can lead the foreign policy in the direction of its own choice,” Zarif said.

‘Intl. consensus against US’

The top diplomat further said the US has failed to turn the tide of global opinion against Iran and in favor of itself by spreading lies about the Islamic Republic.

“They even use an erroneous term when referring to the Persian Gulf, or prevent the Iranian people from visiting their families in the US, denying them visas,” he noted.

Now that the US has left the nuclear accord, officially known as the Joint Comprehensive Plan of Action (JCPOA), they can no longer use their stonewalling tactics in the accord’s Joint Commission — which regularly meets in Vienna, Zarif said.

The Iranian foreign minister asserted that the country sought nothing beyond what it has been allowed under the deal.

The other signatories are to present Iran with “a new package,” he announced, but said its contents are within the boundaries of the agreement and do not include “any other issues.”

Addressing Iran’s military advisory role in Iraq and Syria, Zarif reiterated that Tehran’s presence in those countries is at the request of the governments in Baghdad and Damascus and is solely aimed at countering terrorism.

The presence, he said, would continue as long as those governments would need such help, adding that Iran is the only country in the world that has stepped in to fight terrorism at the host country’s request and has suffered human losses.

Zarif said the advisory support is in the interest of the entire world.

“These terror groups, with which we fought, had disturbed international security. We will keep the support up as long as it is necessary and the regional governments ask us to stay,” he added.