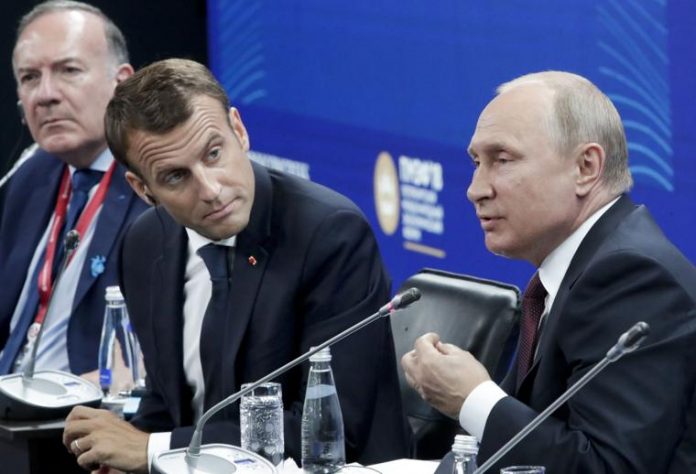 [ Editor’s Note: Some high stakes geopolitical poker has been going on at the Saint Petersburg Forum, where once again Putin is holding the stage as ground zero for free trade and a multi-polar world.

France and Germany are on stage letting the US know they have political and economic options if the US puts the squeeze on via tariffs or backing out of international agreements, where the US seems to be after the gold medal for that category.

The forum moderator was not making a cheap joke with his comment that one of Trump’s unique gifts was “bringing people together”, a left-handed way of really saying that Trump is pushing former US allies into closer relations with others because they see themselves being targeted by Donald and the NeoCons.

Putin came up with the elephant in the living room by asking how one deals with an international partner who assumes that all past international agreements are up for renegotiation after every US national election.

No one in the US political arena in an official government position has shown any concern about the long term consequences of fickleness. One can hardly call it leadership. It is the kind of thing you would expect from Deep State operatives. Rules are for the “other people” to follow, but not them, and of course not for Israelis. I fear this all will get worse before it gets better… Jim W. Dean ]

Indeed, there was so much collective power gathered at Friday event that Bloomberg’s John Micklethwait, who was serving as moderator, quipped how it was the result of Donald Trump’s unique ability to bring people together. However, while humorous, this was an America-centric take that missed the bigger picture.

What was really happening in St. Petersburg was a sort of tug of war, where Russians flirted with East and West as they continue to ponder on which side their bread will be buttered in the future. While Washington and its sidekicks in London don’t seem overly perturbed by Russia’s drift to Asia, France and Germany are alarmed, and representatives from both countries continuously referenced the issue at the SPIEF.

And then Macron made it clear where he stood. “Russia is an inalienable part of Europe… mistakes have been made in the past… we must work to remove our divisions on many issues,” he said.

Former German Chancellor Gerhard Schroeder had earlier warmed up to the same theme: highlighting how an energy partnership with Russia was in Europe’s vital interest. He also mocked US attempts to kibosh the proposed Nord Stream 2 pipeline, saying he wouldn’t currently look to Washington for “examples of high governance.”

Russian analysts present this week echoed Schroeder’s assertion that the Americans are wielding sanctions for business advantage. And Putin himself warned how protectionist measures could eventually lead to a devastating global crisis.

“The system of multilateral cooperation, which took years to build, is no longer allowed to evolve. It is being broken in a very crude way. Breaking the rules is becoming the new rule,” the Russian president remarked.

Also fascinating was how discourse at the SPIEF differed from the isolationist rhetoric prevalent in London and Washington these days. Putin expressed support for free trade and investment, as well as openness to Chinese companies operating in Russia and their people moving here in tandem.

Indeed, one Italian delegate remarked how the world had been turned on its head: “Thatcher and Reagan used to be the ones pushing these agendas, who would have imagined 30 years ago, Moscow and Beijing standing up for capitalist globalization?”

While Wang and Abe spoke of mutually respectful relations honed over many years, Macron was in a thoroughly different position. But the young French leader was keen to play the humble guest: beginning his speech with tributes to those in St. Petersburg who had died in the Second World War, before making a lengthy reference to Leo Tolstoy’s War & Peace.

Nevertheless, politics caught up to Macron when he praised French business for staying in Russia despite “tough times.” Because Russians present were quick to note how Paris was one of the primary drivers behind the Western sanctions that have hurt the Russian economy.

On the ground, the atmosphere was friendly. And the French descended in numbers, with leading companies from Louis Vuitton Moet Hennessy to oil major Total investing in lavish stands.

“You look at Russian culture and it’s all European: from Pushkin to Tolstoy and Rachmaninoff to Tchaikovsky. Despite the geography, this is not an Asian country, in any way,” an exhibitor from Lyon noted.

Yet the Russians are keeping their options open. Putin pointed out that, beyond the bluster, French engagement in Russia isn’t as substantial as many might believe.

“Finland’s Fortum invested €6 billion in Russia, while the whole of France invested €15 billion,” he pointedly told Macron, who had earlier said that France desired to become the largest direct investor in Russia.

Putin outlined why this target was ambitious: “trade with Europe was worth $450 billion once, now it has fallen by half. With China, trade is going to reach $100 billion soon.” That said, despite these occasional reality checks, “Vladimir” and “Emmanuel” seemed to be hitting it off.

Russian business delegates wanted their officials to play all sides.

“Russia should be friends with everyone. Why should we choose?” Alina Ustinova from Rostov Oblast noted. “We are mostly European, but a bit Asian too and we must trade with all comers. Even the Americans are welcome, when they finally see sense.”

“I don’t see anything wrong with dancing with the French on Friday night and the Chinese on Saturday; perhaps we could even manage a Wednesday for Trump,” she teased.