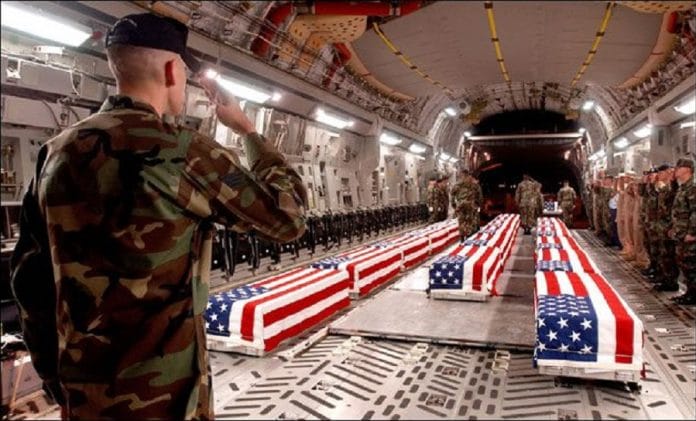 Today is Memorial Day, 2018. It is a day we are supposed to honor the men and women who died in America’s wars.

Unfortunately, at least since 2003, Americans in the US military have been dying, not in wars being fought for America, but for the foreign nation of Israel. To ignore this fact is an insult to those who fell victim to the selfish greed of US politicians from both parties who were motivated to start the unnecessary Iraq War. Their motivation was the political rewards they would receive from the Israel lobby for sending Americans to fight and die for the Jewish state.

It is necessary that the facts for the real reasons the Iraq War was started are known far and wide.

Today at Arlington National Cemetery, Donald “I love war” Trump gave a speech which makes very clear the importance of educating as many people as possible about the lies that were told to start the Iraq War.

Trump had as guests at his speech, the family of US Marine Lt. Colonel David Green. Green was a Marine helicopter pilot. He was killed in the Iraq War in the summer of 2004 when he was coming to the aid of grunts on the ground who needed air support. He died a hero, fighting for his fellow Marines on the ground. However, the REASON any of them were there fighting and dying in Iraq, was NOT to protect America and Americans, it was to protect the Jewish state of Israel.

This is made clear by former George W. Bush adviser and former director of the 9/11 commission, Philip Zelikow, who said at Thomas Jefferson’s University of Virginia:

Why would Iraq attack America or use nuclear weapons against us? I’ll tell you what I think the real threat (is) and actually has been since 1990 – it’s the threat against Israel. And this is the threat that dare not speak its name, because the Europeans don’t care deeply about that threat, I will tell you frankly. And the American government doesn’t want to lean too hard on it rhetorically, because it is not a popular sell.

Zelikow made these vitally important public statements on September 10, 2002, six months before the Hebrew Bible/Old Testament-based neoconservatives, the Israel lobby and Israel were able to get the Iraq War started. IF America still had a truly free press, real journalists would have been all over Zelikow’s statements, and would have found them to be true.

They would then have cutoff at the root the war-mongers’ efforts to start the Iraq War by making the real reason for the Iraq War common knowledge. This is because a free press would be based on this principle expressed by Thomas Jefferson regarding truth and reason. Jefferson said,

We are not afraid to follow truth wherever it may lead, nor to tolerate any error so long as reason is left free to combat it.

Unfortunately, we no longer have a free press in the US, and reason is no longer left free to combat lies and errors.

If we had a free press that brought to light the real reason for the Iraq War, the American people never would have allowed the political whores in Washington to have started the Iraq War. Then, not only would Lt. Colonel Green, along with 4,814 other Americans, still be alive, so would an estimated 500,000 Iraqi civilians still be alive.

Trump had Lt. Colonel Green’s wife and two children stand up to be honored at his Memorial Day speech. Green’s son, Wesley, is a senior at Zionist Christian Jerry Falwell’s Liberty University. He plans on following in his father’s footsteps by joining the US military.

Since the mainstream media will remain silent on the real reason for the Iraq War, as well as for the upcoming US war against Iran, people who know the truth need to use every means they can to educate as many people as possible to the fact that Israel virtually owns US politicians from both parties when it comes to US foreign policy for the Middle East. Young people, like Lt. Colonel Green’s son, need to know that by joining the US military they will be fighting for the foreign nation of Israel.

US military leaders even openly state that US troops are prepared to die for the Jewish state of Israel. Spreading these facts and knowledge to the best of our ability is the right thing to do. It can help the children of those who died under the illusion of fighting for America, while in fact they were fighting for Israel’s benefit, from suffering the same fate.

A root cause for Israel’s excessive influence over the US is the false belief by millions of Americans who are Christians that the Jews are God’s chosen people, and other teachings of Jewish superiority.

Part and parcel of this nonsense is that God gave a gift of real estate to the ancient Jews for them to have for their Jewish state of Israel “for ever”, which includes land that stretches from parts of Egypt through Syria and into parts of modern day Iraq. Israeli PM Netanyahu perpetuates this lie when he insists that an undivided Jerusalem is Israel’s eternal capital.

The American founder and Deist, Thomas Paine, gave us great advice in The Age of Reason, The Complete Edition, when he wrote about how we should deal with nonsense. Paine wrote:

We must choose between our gift from God of innate reason, or the man-made unreasonable “revealed” religions. Thankfully God gave us reason, not religion, so the right choice is easy to make!