A draft Israeli bill proposes to ban filming of soldiers and jail offenders for up to 5 years. Here are some videos that would qualify as an offense under the proposed ban, slammed as an attempt to hide abuse of Palestinians.

The controversial legislation states that anyone who “filmed, photographed, and/or recorded soldiers in the course of their duties, with the intention of undermining the spirit of IDF soldiers and residents of Israel, shall be liable to five years imprisonment,” according to reports in Hebrew-language media earlier in May. 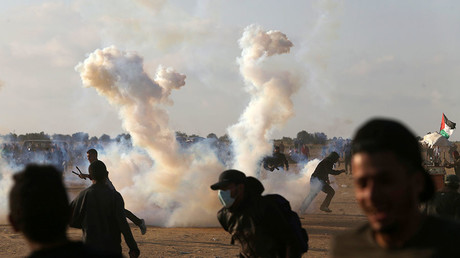 Fist-size gunshot wounds, pulverized bones, inadmissible use of force by Israel in Gaza – HRW to RT


The document, which critics see as a new way of silencing criticism of the Israeli army, says that the country “has witnessed a worrying phenomenon of documentation of IDF soldiers” in recent years. It accuses human rights groups such as B’Tselem, Machsom Watch Women, and Breaking the Silence of waiting patiently for any IDF activity “that can be presented in biased and tendentious form.”

The Knesset member behind the bill, Robert Ilatov, insists that Israel has “a responsibility to provide IDF soldiers with optimal conditions for carrying out their duties.”

The legislation was proposed amid worldwide condemnation of the IDF’s use of lethal force during the Palestinian ‘Great March of Return’ protests, which saw at least 119 people killed since the end of March. The Palestine Liberation Organization (PLO) called the bill a “serious breach” of freedom of media and expression. It insisted that if IDF troops have nothing to hide, “there is no harm in documenting their actions against Palestinians.”

“Israel is manipulating its so-called democratic legal system to provide cover for its war crimes and to shield its soldiers from any kind of judicial accountability, thereby providing them with full impunity at the expense of the Palestinian people, who are brutalized and terrorized on a daily basis,” the PLO statement reads.

Fears that the bill would consolidate the impunity of IDF personnel may not be groundless, as rights groups often accuse Israeli forces of human rights violations, including the killing of unarmed Palestinians. Violence has escalated recently after US President Donald Trump’s decision to move the country’s embassy to Jerusalem.

Falling under the proposed ban are the activities of the prominent rights group B’Tselem, which was the first to publish a blood-chilling video of IDF soldier Elor Azaria finishing off an injured and motionless Palestinian man back in 2016. The footage triggered worldwide condemnation and questioned the Israeli army’s ethical code. Azaria was freed this May after serving a nine-month sentence.

Footage of an Israeli border police officer flipping a disabled Palestinian man’s wheelchair to the ground also found its way to YouTube in 2016, outraging thousands. Another shocking video from 2016 showed a Palestinian detainee blindfolded and zapped with electrodes as soldiers laughed and filmed the abuse.

What was condemned as a heavy handed response to recent Gaza border protests and branded a “massacre” by the Palestinians was also constantly filmed by protesters and observers. One video appears to show an Israeli sniper shooting a passively standing Palestinian. Enthusiastic cheers can be heard in the background, along with a voice that says “Of course I filmed it.” Someone adds: “What a legendary video.”

“The problem is that the Israeli leadership is encouraging the policy of shoot to kill even in cases [where] an attacked [person] does not pose a threat,” lawyer Rami Saleh, a director at the Legal Aid and Human Rights Center, told RT back in 2017.

Where is media liberty?

Wouldn’t want the world to see the shooting of innocent cilvillians now would we?

What do you do if you’re a country with a military that routinely and indiscriminately slaughters innocent people, including children, in support of illegal occupation? You make it a felony to film them or report on what they do https://t.co/F6IweTHgBV (via @AndrewDFish)