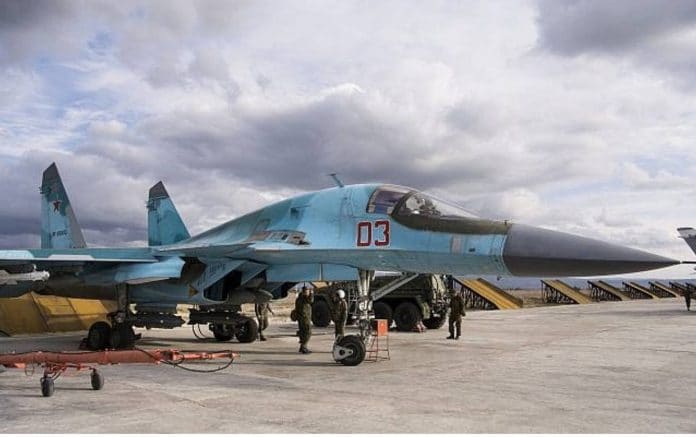 A Russian air force technician reports to a pilot that a Su-34 bomber is ready for a combat mission at Hemeimeem airbase in Syria on January 20, 2016. (AP Photo/Vladimir Isachenkov)

In a rare incident Israeli warplanes were reportedly intercepted by Russian fighter jets over Lebanon early Monday morning, despite an understanding in place between Moscow and Jerusalem to avoid conflict between the two countries.

There has been no official confirmation from Russia or Israel.

Video circulated of the Russian planes flying over Lebanon, but the clip did not show any Israeli jets. 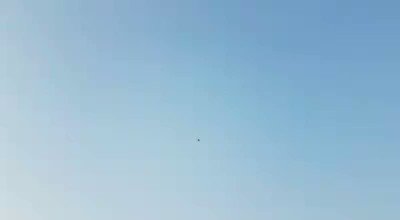 According to the reports cited by Hadashot, the Russian planes may have been taking part in drills off the coast of Lebanon and Syria but were forced to land due to bad weather conditions.

Al Masdar news said it was the first time in months that Russian planes had entered Lebanese airspace from Syria. The news agency said the reason for the mission was unknown.

Israeli jets reportedly often fly over Lebanese airspace conducting reconnaissance missions. Reports have also said that many of Israel’s attacks on targets in Syria have been launched from Lebanese airspace.

Last week IAF commander Amikam Norkin revealed that an Israeli F-35 fighter jet conducted airstrikes on at least two occasions. He showed visiting air force officers from other countries a photograph of the stealth fighter jet flying over the Lebanese capital of Beirut, in what could be seen as a tacit threat to the Lebanon-based Hezbollah terror group. 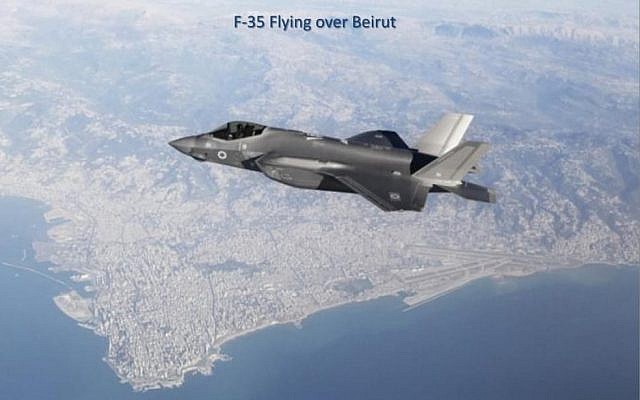 A photograph of an Israeli F-35 stealth fighter jet flying over the Lebanese capital of Beirut, which was apparently leaked to Israel’s Hadashot news. (Screen capture)

Earlier this month Prime Minister Benjamin Netanyahu said he had no reason to believe the Kremlin would try to limit Israel’s freedom of operation in the region.

In light of the heavy Russian presence in Syria, Israel in September 2015 set up a mechanism with Moscow — involving work groups led by the deputy chiefs of both militaries — to avoid conflicts and potentially fatal misunderstandings.

However, senior air force official stressed that this system was limited: Israel does not inform the Russians before conducting airstrikes in Syria, nor does Russia let the Israelis in on its plans.