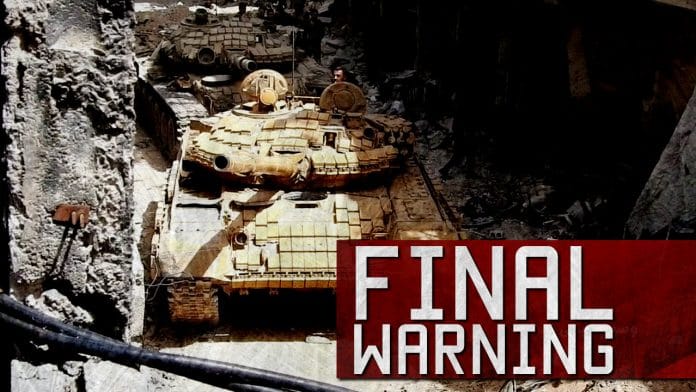 The Syrian military has concentrated a notable force in the province of Daraa to be able to employ a military option should negotiations with local armed groups fail. Reinforcements from the Tiger Forces, the 4th Armoured Division, the 5th Armoured Division, the National Defense Forces, Liwa al-Quds and the Syrian Social Nationalist Party have recently arrived in the area.

According to local sources, the Syrian-Russian delegation has recently send militants a final warning providing them with three options:

At the same time, armed groups in southern Syria, including the Southern Front, Ahrar Nawa, Al-Maghawir and Ahrar al-Golan, have merged into a new militant formation entitled The Army of Salvation. Syrian experts immediately linked this development with the militants’ preparations to repel the upcoming offensive instead of reaching a peaceful solution with Damascus.

These developments come amid newly surfaced unconfirmed media reports about indirect Iranian-Israeli talks with a Jordanian mediation on the situation in southern Syria. According to these reports, Iran has agreed to stay away from the battle against militants in southern Syria while Israel has pledged not to intervene into clashes near the occupied Golan Heights and near the Syrian-Jordanian border as long as no Iranian forces are deployed there.

Reports of this possibility have immediately become wide spread and popular in the media. However, there is little new about the Iranian attitude in it because Teheran has officially announced that its forces will not participate in the aforementioned operation. As to the Israeli side, according to some experts, it’s hard to believe that Israel will stay away when Syrian government forces crush militants near the Golan Heights. However, Tel Aviv will likely limit its activity to individual strikes justified by some shells falling in the occupied area.

Defence Minister Avigdor Lieberman, military intelligence chief Tamir Heiman and other Israeli officials will visit Moscow later this week for meetings with their Russian counterparts. Among other topics, the sides will probably discuss the situation in Syria, including the upcoming military operation in southern Syria.