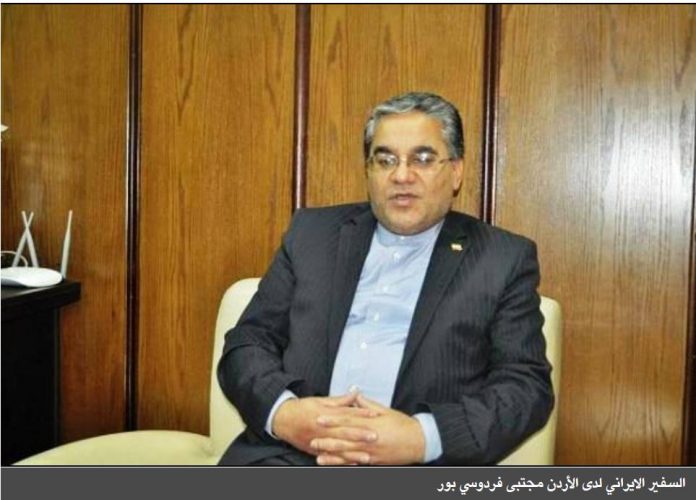 Editor’s note:  VT is watching this story closely and isn’t entirely buying this.  We have gotten word that Damascus and Hamas are coordinating pressure on Israel, which has cost the lives of dozens of Palestinians.

Colonel Jim Hanke, former Defense Attache to Tel Aviv said that the entire Israeli reserve is bogged down killing Palestinians while the Syria Arab Army prepares to retake areas Israel has been operating in, supporting al Qaeda, since 2014.

We suggest this very important story is totally false.  See if we are right.  Gordon and Jim

Elaph learned from informed sources that secret negotiations between the Israelis and the Iranians in Amman were mediated by Jordan, which ultimately led to an Iranian commitment not to participate in battles in southwestern Syria.

Last week, a Jordanian broker was traveling between the two rooms, carrying messages from the Iranians to the Israelis and vice versa. Informed sources told Elaph that the discussion between the Israelis was about the Syrian situation and the expected battle in southeastern Syria, specifically in the provinces of Daraa and Quneitra, where they agreed between the two sides, according to sources that Iran and Hezbollah and their militias should not participate in these upcoming battles against the opposition Syrian and armed factions there on the Syrian army to do this task and that the Jordanian forces to maintain their territory and prevent infiltration from the other side.

The sources said that Israel had made it clear to the Iranians that it would not intervene in those battles near the border of the cease-fire line in the Golan and the Jordanian-Israeli border as long as Iran and its militias and Hezbollah will not enter it. A source familiar with the talks said the two sides discussed the matter through Jordanian mediation and that the Israeli side was surprised at the speed with which the agreements were made and the commitments made between the two sides.

The Iranian ambassador to Amman, Mujtaba Ferdosi Baur, received a number of Iranian security men authorized to negotiate with the Israelis in Amman, where led the negotiations on the Israeli side, deputy head of the Mossad, accompanied by a number of security men and the military.

In recent days, Israel and Iran have exchanged many messages via the Jordanian side regarding the situation in southern Syria. Israel warned Iran against a major and comprehensive confrontation in the region if Iran enters its forces and Hezbollah elements into southern Syria.

In the same spirit, Jordan carried the same message to the Syrian and Russian regimes, according to the sources.

The source added that it seems strange and unrealistic, but Iran seems to have begun to realize the magnitude of the loss suffered in Syria as a result of successive Israeli strikes to its sites in Syria.

In an attempt to avoid greater losses and greater pressure to get out of Syria, Tehran agreed not to participate with the regime’s army in the south-eastern battles in Syria, provided that Israel does not intervene in these battles in the coming days, which will apparently take place in Daraa and Quneitra near Israel And Jordan.

It should be noted that there is a joint defense agreement between Jordan and Israel in the peace treaty signed between the two countries, under which Israel will defend and support Jordan militarily in case of any danger.

The source, who took part in the indirect negotiations between Israel and Iran, said that things went smoothly and quickly and that all sides agreed on the matter.

He added that the Russian side, which was closely informed and close to the negotiations in Amman, provided assurances to Israelis and Jordanians not to participate Iran and Hezbollah in the upcoming battles in the south of Syria in the provinces of Daraa and Quneitra.

The source added that an agreement was reached in Amman on the mechanism of joint action among all in Syria to prevent mistakes that could lead to the outbreak of fighting or confrontations between Jordan, Syria, Israel and the Russian side similar to the Russian-Israeli agreement on the Syrian airspace.

The Iranian ambassador in Amman said in a press statement that the Iranian forces and militias loyal to them will not participate in the battles to be conducted by the regime soon in the provinces of Daraa and Kenitra.

He added that Iran has reached understandings with Jordan and other forces in the region not to participate in the upcoming battles and not to be in Daraa and Quneitra so as not to confront or escalation in the region may lead to full-scale war.

On the other hand, the US administration threatened the Syrian regime and warned him against the consequences of violating the agreements of truce and cease-fire in south-east Syria, specifically in Daraa and Kenitra.

The United States is concerned about talks about the Syrian regime’s planned battles in southeastern Syria in areas where ceasefire and tension agreements have been signed, announced by Presidents Donald Trump and Vladimir Putin in November.