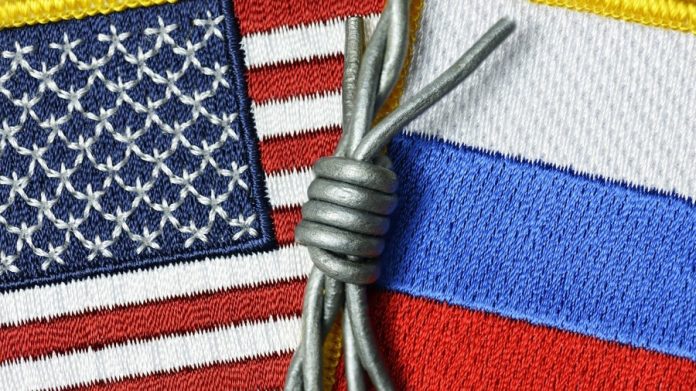 [ Editor’s Note: Well, better late than never, but this Russian Senate report should have been published several years ago.

We could never understand at VT why the Moscow went through all the endless election meddling pummeling here and was keeping mum on the long history of US election meddling, not only in Russia, but anywhere else that the US desired.

All the US needed for domestic cover, unsaid of course, was that it served “pursuing our interests”, the morphing of the old term of “national security interests” into a new one that was a Deep State construct, as the “our interests” meant theirs, not the American people’s.

For virtually the entire leadership of America to lay down while this was going on, government, political, academic, military, diplomatic and intelligence, has earned them all the moniker of “never has so little been owed to so few, by so many. It has been a social betrayal that the English language fails to provide the vocabulary to describe.

What the Russians have left out of their report of course is that they responded where they could against US election meddling with their own in turn, despite their not really being equipped to do so. But they did because they had the right to under international law, to respond to aggressive attacks. That language refers to military attacks specifically, but by derivation includes political attacks as they are an obvious offensive act.

Also left out of the Russian report, due to its sensitivity is the massive election interfering that Israel has a long history of, something that is an industry in the little country in the Mid East. And with all the money that the US pours into Israel, one could say what it does is just a branch of the overall American effort.

But all that said, historically nobody here seems to care if the US does this. No politician has ever run for office using it as one of his planks for cleaning up America’s image from the false one it projects of protecting freedom and democracy.

The US  Coalition is the biggest mass killer on the planet now when you include all of its proxy forces. And our security people involved, military and civilian, cannot claim a right of defense as most of what we see having been done was purely Deep State aggression using taxpayer funded military forces to do so.

So who is to blame of just sitting back and watching  it all happen? As Gordon used to say, “Only a dog will eat its own vomit, but I am now so sure anymore.” The US as a whole needs a mass hypnotherapy session to try to dig out why it has suppressed the will to resist such an obvious internal threat to itself.

I generally find among the groups I associate with, it is a topic that almost everybody would prefer not be brought up. Who is going to fix it if we don’t? … Jim W. Dean ]

A special commission report on foreign meddling in the 2018 presidential election has been unveiled in Russia’s Upper House. The document highlighted the main methods of the elaborate campaign, spearheaded by the US.

The report, presented on Wednesday in Russia’s Upper House (the Senate), was prepared by the Commission for State Sovereignty Protection in cooperation with leading experts and analysts. The publicly available document was presented by the head of the commission, Senator Andrey Klimov.

The document pinned the blame for the meddling in Russia’s election directly on Washington, linking the ongoing surge in hostile activities with the domestic political struggle in the US. Attempts to interfere in internal Russian affairs, however, are not new, as they have been going on since the collapse of the Soviet Union.

The US has been the “main violator of international law” since the founding of the United Nations, and has “interfered more than 120 times in the affairs of 60 countries on all continents.” Washington’s closest allies – the UK, Germany, France, NATO, and European countries – are also to blame, since they either participate directly or support US activities, according to the document.

“We tried to show… the areas in which the subversive work took place. We’ve named 10 such areas. We have concrete examples for all of them based on absolutely reliable facts. It’s not someone’s guess, it’s not ‘highly likely,’ it’s something we can prove anywhere, it is backed up by testimonies, documents and it is, by great margin, not disputed by the other side [the US],” Klimov said at a press conference, which followed the hearings in the Upper House.

The main purpose of the commission’s report, according to Klimov, is to show the public – both Russian, and international – the scale and systematic nature of the efforts to undermine Russia’s “electoral sovereignty.” The ultimate goal of these activities is to force changes of Russia’s political course, destroy its territorial and economic integrity, he said.

The West has been trying to de-legitimize each and every election in Russia, routinely dismissing them as “undemocratic.”Ahead of the 2018 presidential election, both the US and EU condemned the barring of opposition figure Aleksey Navalny from the election. Ignoring his criminal conviction that bars Navalny from running for president, a US State Department representative called it a move to “suppress independent voices.”

The EU foreign office went even further and stated that barring the politician from the election due to “an alleged past conviction” casted “serious doubt on political pluralism in Russia and the prospect of democratic elections.”

Such calls for “democracy” completely disregard Russian law and constitute a blatant attempt at election interference. While one may view Navalny’s conviction as they please, it is certainly not an “alleged” but a very real one, Klimov noted.

The election meddling also included wide-scale cyberattacks on government electronic resources, primarily the Central Election Commission. All in all, roughly one-third of such attacks are conducted from US territory, according to the report.

More discreet methods include stirring dissent by intensifying the activities of foreign-based Russian-language media outlets and “independent” bloggers. The use of modern technology and communication methods apparently yielded some results, since the latest protests, while much smaller than those of 2011-13, increasingly attracted younger and even underage activists into the streets.

NGOs operating in Russia have enjoyed a steady flow of funding from abroad, which spiked following the failure to discredit the 2012 presidential election. In 2015, for instance, politically active NGOs received 80 billion rubles (around $1.3 billion) from the US alone, the report says.

Although Russia limited the activities of foreign NGOs within the country, requiring them to openly register as ‘foreign agents,’ the flow of funds did not stop. Various ‘grey’ schemes came into use, such as providing large sums in cash or transferring funds to private individuals. In the meantime, Russia-based subsidiaries of foreign NGOs flourished – their funding in 2017 almost doubled compared to 2016.

The total amount of NGO funding greatly surpasses the upper limit for a presidential candidate’s campaign in Russia. The scale is comparable to the entire budget for holding elections in the entire country, according to the report.

Apart from directly financing “civil activists” in Russia, the US and its allies spent money on more covert activities. Ahead of the election, several unsanctioned socio-political surveys were conducted in Russia, which were sponsored by foreign government structures – including the Pentagon – the report stated.

A large part of the foreign efforts to interfere in domestic affairs targeted Russian President Vladimir Putin directly. This was observed as early as 2004, but spiked ahead of the 2012 election, according to the report. Then-US Vice President Joe Biden visited Russia and met with opposition figures, and told Putin that he should not run for a new term, since “Russia was tired” of him, the report says.

A similar pattern was seen in the following years, with Putin being portrayed as the only obstacle to the growth and prosperity of the Russian economy, and the man who “deprives the people of the democratic achievements of the 1980-90s.”

Apart from smear campaigns, the report said some media also tried to demonize the Russian president in the eyes of the public by exaggerating certain problems to provoke Putin into making “unacceptable mistakes.”

The foreign activities outlined, however, failed to yield any tangible effect on the election, proving not their ineffectiveness, but the strength and stability of Russia’s socio-political system, the report concludes.

The commission prepared a set of recommendations on countermeasures against future foreign meddling, primarily by tightening up the laws. The proposed measures include prohibiting foreign-printed election campaign handouts, banning the participation of non-Russian citizens in the campaigns in any form, and barring dual-citizenship individuals from becoming trustees of candidates.

Other recommended measures include introducing a “special relationship” format with countries that impose sanctions or meddle in Russian affairs. The recommended measures are not limited to restrictions. The report called for other countries and international organizations to become united in jointly opposing US meddling practices.

On the home front, special attention will be given to education work, aimed primarily at young people, who are deliberately targeted with foreign propaganda, Senator Lyudmila Bokova told the press conference. The classified version of the report, according to Klimov, contains additional recommendations for countering foreign meddling.