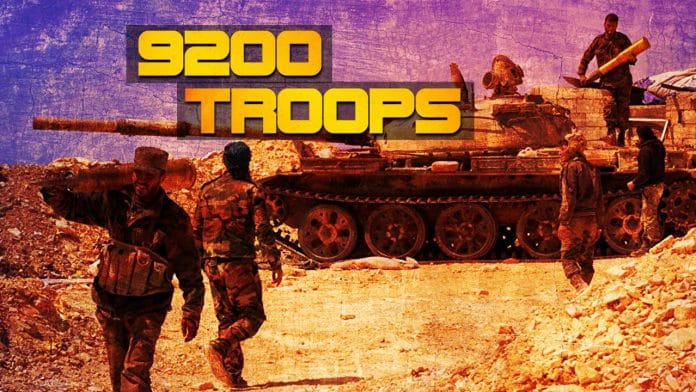 More than 9,200 locals from the Eastern Ghouta region near Damascus have joined the Syrian Arab Army (SAA) and several pro-government groups since the liberation of the area on April 14, the Syrian Observatory for Human Rights reported on May 30.

Under the reconciliation agreement reached in the area, 18-42 y.o. men got a six-month period to settle their legal status and join the SAA if they have not completed their mandatory service.

On May 9, the number of locals joined government forces was about 4,000 according to the Syrian pro-opposition news outlet Damascus Voice.

The US is allegedly considering to abandon the al-Tanaf base near the Syrian-Iraqi border under a deal with Russia, which will also force Iranian-backed forces and Hezbollah to withdraw away from the border with Jordan and from the contact line with Israel, the Newsweek magazine reported on May 30. Earlier, similar rumors were fueled by Saudi and Israeli media.

On May 30, Russia’s Foreign Minister Sergey Lavrov made announce statement on the situation in southern Syria. He said that all non-Syrian forces must withdraw from the de-escalation zone, which was established by the US, Russia and Jordan in July of 2017. Some sources linked this statement with the aforementioned rumors.

Most likely, the situation can become more clear after this week visit of Israeli Defense Minister Avigdor Lieberman and other Israeli officials to Moscow or after the start of a military operation in southern Syria by the SAA.

ISIS mobile units carried out new attacks on government forces positions in eastern Syria engaging them near the T3 pumping station and the village of Humaymah. However, the both attacks were repelled.

The ISIS activity in eastern Syria is one of the reasons behind the SAA’s efforts to solve the Daraa militants issue as soon as possible. Then, government troops will be able to deal with the remaining ISIS terrorists in the Homs desert.