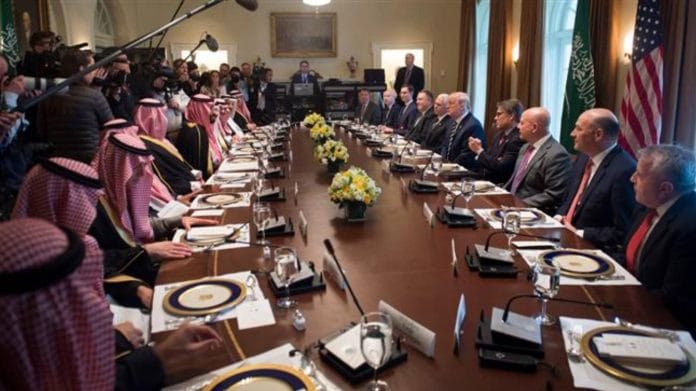 A top fundraiser for US President Donald Trump and his business partner have reportedly promoted anti-Qatar policies at the highest levels of the US government in return for lucrative business favors from the crown princes of Saudi Arabia and the UAE.

According to an investigative report released by the Associated Press on Monday, Trump’s fundraiser Elliott Broidy and Lebanese-American businessman George Nader spent a year cultivating links with Saudi Crown Prince Mohammed bin Salman and UAE Crown Prince Sheikh Mohammed bin Zayed Al Nahyan (MBZ) who were seeking to change US foreign policy with regard to their archrival Qatar.

The AP investigation was based on interviews with over two dozen informed individuals and hundreds of pages of leaked emails between Broidy and Nader, including work summaries, contracting documents and proposals.

Broidy and Nader spearheaded their secret campaign to influence the White House and Congress and championed the anti-Qatar policy of the Persian Gulf monarchies that eventually led to the blockade of the tiny nation.

The AP had previously reported that Broidy and Nader were seeking to get an anti-Qatar bill through Congress, noting that they tried to conceal the source of the money behind their influence campaign. The two did not register with the US government under the Foreign Agents Registration Act, which obliges lobbyists working for foreign governments to disclose their ties and political activities.

In the course of two meetings with Trump, Broidy passed messages from the two princes to Trump and told the president he was seeking business with the Arab royals.

Nader, who has been setting up behind-the scene meetings for Israeli and Arab dignitaries with American power brokers and legislators in the US since 90s, is a pedophile convict charged with sexually abusing 10 minors in the Czech Republic in 2003.

He is now living in the UAE, working as an adviser to Sheikh Mohammed bin Zayed Al Nahyan.

Nader and Broidy formed their partnership to curry favor with the two Arab crown princes by launching a campaign against Qatar in order to turn that success into multi-million-dollar defense deals.

On February 7, 2017, Broidy wrote to a staffer for the chairman of the US House Foreign Affairs Committee with regard to a planned sanction bill against Qatar over alleged support of terrorist groups.

The two business partners offered several plans to Mohammed bin Salman and Mohammed bin Zayed for over $1 billion of contracts, including formation of a Muslim military force of 5,000 troops to fight in the escalating war in Yemen, cooperation with the UAE to gather intelligence, enhancement of Saudi maritime and border security and creation of counterterrorism centers in Saudi Arabia.

According to the first emails and a March 2017 document, Nader and Broidy decided to focus on the lobbying campaign, by proposing a $12-million budget to “expose and penalize” Qatar and get Washington to pressure Doha to “aid in coercive action against Iran.”

The main objective of the plan was reportedly providing evidence about Qatar’s closeness with Iran and Doha’s support for banned groups such as the Muslim Brotherhood.

The two were seeking to use Broidy’s intimate ties with Treasury Secretary Steven Mnuchin to persuade the US administration to impose sanctions on Qatar and move America’s key military base from al-Udeid Air Base in Qatar to another Persian Gulf country.

Broidy claimed that he had gained the support of chairman of the House Foreign Affairs Committee, Republican Rep. Ed Royce, for an anti-Qatar bill, noting he had “shifted” Royce from being critical of Saudi Arabia to “being critical of Qatar.”

The AP had earlier reported that Broidy gave nearly $600,000 to GOP candidates and causes since the beginning of 2017, with Royce receiving the biggest share.

On the other side, Nader wrote to Broidy in an email in March that he had “a terrific, magnificent meeting” with Mohammed bin Salman, laying the groundwork for their intended billion-dollar contracts.

Broidy also persuaded the American think tank, Foundation for Defense of Democracies, to hold an anti-Qatar conference at the Fairmont Hotel in Washington on May 23, 2017, and assigned the commission of 200 articles to the foundation and other think tanks.

On April 21, 2017, Broidy sent Nader a “confidential” draft of an Op-Ed, “The Two Faces of Qatar, a Dubious Mideast Ally,” which was published in The Wall Street Journal three days later.

The piece, co-written by former deputy head of US European Command Gen. Charles Wald, called for relocation of US military assets from the al-Udeid Air Base in Qatar to the UAE.

Wald himself was in fact listed as a member of Broidy’s company, Circinus LLC. that was pitching contracts in Saudi Arabia.

Two weeks later in June, the UAE, Saudi Arabia, Bahrain and Egypt launched a travel and trade embargo against Qatar.

The Saudi-led quartet presented Qatar with a list of steep demands and gave it an ultimatum to comply with them or face consequences.

Doha, however, refused to meet the demands and stressed that it would not abandon its independent foreign policy.

Qatari emir is not attending a summit of Arab nations in Saudi Arabia.

One day after the blockade started, Trump sent a series of tweets signaling support for the anti-Qatar measures, noting his recent visit to Saudi Arabia was “already paying off.” Trump added that the Saudis and its allies “said they would take a hard line on funding extremism and all reference was pointing to Qatar. Perhaps this will be the beginning of the end to horror of terrorism!”

In late September, Broidy arranged another meeting with Trump in the Oval Office at the White House. According to emails between Nader and Broidy, the meeting sought to sell the idea for a Muslim fighting force, to keep the president from intervening in Qatar and to set up a discreet meeting between Trump and the crown prince of Abu Dhabi.

The princes “are counting on you to relate it blunt and straight,” Nader wrote.

After the meeting was held on October 6, 2017, Broidy reported back to Nader that he had urged Trump to stay out of the Qatar dispute and explained Circinus’ plan to build a Muslim fighting force.

Broidy met Trump again on December 2, 2017, telling the president the crown princes were “most favorably impressed by his leadership.”

He also offered the crown princes’ assisstance in a Middle East peace plan being drawn up by Jared Kushner, but did not talk about his partner’s utter contempt for the plan.

“You have to hear in private my Brother what Principals think of ‘Clown prince’s’ efforts and his plan!” Nader wrote.

“Nobody would even waste cup of coffee on him if it wasn’t for who he is married to,” he added.

PressTV-UAE lobbied US to sack Tillerson for backing Qatar: Leaks

Leaked emails show the UAE lobbied the US to sack Secretary of State Rex Tillerson for failing to support the Emirates against rival Qatar.

According to a leaked email, a few days after Broidy’s meeting with Trump, the UAE awarded Broidy an intelligence contract worth of up to $600 million over 5 years.

“The Muslim fighting force contract would be even larger, potentially bringing their entire Gulf enterprise to more than $1 billion,” AP reported.

In February, leaked batches of Broidy’s emails and documents that had apparently been hacked were sent to the AP, The New York Times and other news organizations anonymously.

Reports said Broidy was also planning to use his White House access for clients in Africa, Eastern Europe, the Middle East and Asia.

Last week, Saudi Arabia reportedly decided to stop working with Nader and Broidy, with a senior official citing Mohammed bin Salman as saying that Riyadh must end “engagement with these people.”