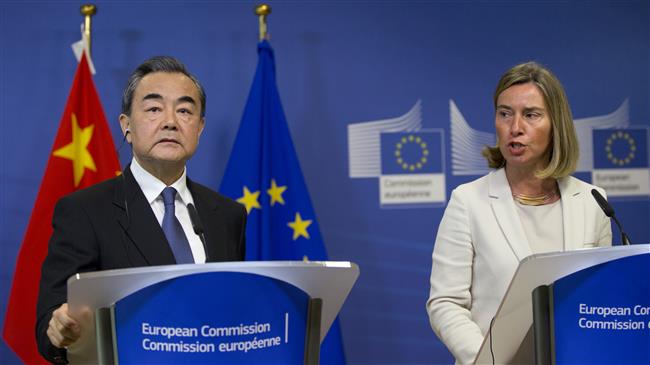 [ Editor’s Note: Trump’s JCPOA partners are standing solid to abide by the deal, turning the screws on US diplomatic isolation by not getting picked off one at a time with tariff threats.

There has been no mention of this having a connection to resisting the US’ “unipolar crack cocaine” fostered upon the US political establishment, but it is clearly hovering in the background.

But more challenging will be holding an international resistance block together against the Trump tariffs. We initially saw a knee-jerk reaction among targeted countries, that tariffs were ok on other countries, but not theirs. Trump was at the helm of what seemed to be a divide-and-conquer game of thrones.

We are seeing an evolution of that now. Canada and Mexico this week announced they are coordinating their tariff responses to Trump. Adding that to the standing shoulder to shoulder by the non-US JCPOA partners, we have a visible formula for the world standing up to US unipolarism, by negotiating as a group. The only fly in the ointment is Germany’s posing to Trump to put all the steel and aluminum tariffs on China and leave Germany alone.

This would not be unfair, and the concept of unipolarism is a political, diplomatic, and in all probability a military aggression by the US as in the post Cold War era, the US is still standing behind its 700 bases and a plans for a 700-ship navy.

No military analyst with two brain cells does not know this is an obvious aggression, as there is no real military threat from anyone.

What the US has done is borrowed from the Israeli twisted logic, that anyone capable of defending themselves is a threat, and hence subject to an attack at the time of the US choosing – the logic of gangsters and thugs – and a strong indication as to who is really running the country. Thus ends my cheerful missive of today … Jim W. Dean ] 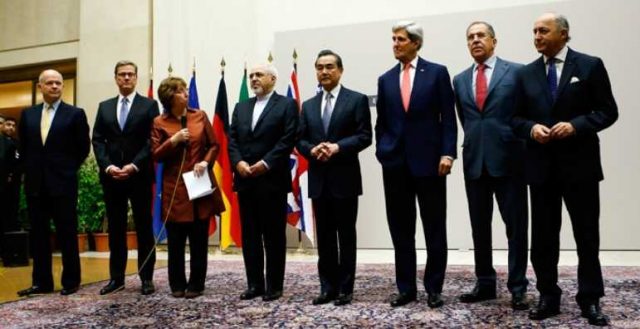 The European Union’s foreign policy chief Federica Mogherini says the bloc and China share commitment to preserve a nuclear agreement signed between Iran and major world powers in 2015 and to work for its continuation.

Mogherini was speaking at a joint press point with Chinese Foreign Minister Wang Yi in Brussels on Friday following the EU-China strategic dialogue after the United States’ move to withdraw from the nuclear agreement, officially known as the Joint Comprehensive Plan of Action (JCPOA), last month.

“Indeed, we are one hundred percent determined to continue cooperation between China and the European Union, but I can add also with Russia as it belongs to the signatory countries, but also with other partners internationally who are committed to preserve the nuclear deal and its full implementation,” the senior EU official said.

Mogherini added that she held talks with the Chinese foreign minister on the “key” issue of the full continued implementation of the nuclear deal that has been the result of twelve long years of diplomatic work.

She noted that China played an “essential” role in the nuclear negotiations and would continue such its leading role in the upcoming weeks, months and years “in continuing the full implementation of the agreement.”

The senior EU official stressed the importance of “the continued implementation of the nuclear-related commitments” under the JCPOA and said, “China’s contribution here is relevant, key, and essential – in particular, the leading role that China has on the Arak [heavy water reactor] project.”

In April 2017, Iran and China signed the final version of a contract to redesign and modernize the Arak heavy water reactor in central Iran, an important step in line with the implementation of the historic nuclear agreement between Tehran and the P5+1 group of countries.

Iran and China sign the final version of a contract to redesign and modernize the Arak heavy water reactor in central Iran.

According to the agreement, China is to review the new design of the Arak reactor made by the Iranian experts and confirm its compliance with the international safety standards of the International Atomic Energy Agency.

The 40-megawatt Arak reactor is intended to produce isotopes for cancer and other medical treatments. Iran is redesigning the planned research reactor to sharply cut its potential output of plutonium.

Mogherini further pointed to her talks with the Chinese foreign minister on bilateral cooperation on the economic aspects of the JCPOA implementation and urged “full coordination between China, the European Union and others in the world to guarantee that Iran can continue benefiting from the economic benefits that came from the agreement and will continue in the weeks to come.”

“And the role of China, let me say it very clearly, has been and continues to be extremely crucial, positive and appreciated not only by the European Union, but also by our other partners,” Mogherini pointed out.

US President Donald Trump announced on May 8 that Washington was walking away from the nuclear agreement, which was reached between Iran and the five permanent members of the UN Security Council – the US, Britain, France, Russia and China – plus Germany.

Speaking to reporters in Brussels on Monday ahead of a meeting of EU foreign ministers, the European Union’s foreign policy chief said the 28-nation bloc is determined to save the JCPOA despite the United States pullout from the deal.

PressTV-EU resolved to save JCPOA after US exit: Mogherini

The European Union’s foreign policy chief says the bloc is determined to save the Iran nuclear agreement.

She added, “You know that we have been acting already at European Union level to put in place a set of measures to make sure that the nuclear agreement is preserved and the economic investments from the European side, but also from other sides in the world are protected.”

In a meeting with his Chinese counterpart in Beijing on May 13, Iranian Foreign Minister Mohammad Javad Zarif said he seeks a “clearer image” of the future of the key nuclear agreement after the US withdrawal.

During talks with the Chinese foreign minister, Zarif pointed to good relations between Tehran and Beijing after the JCPOA implementation started in 2016, adding, “We are confident that China will stand by Iran. China and Iran have comprehensive strategic partnership and are trade partners and these relations still continue.”