Saudi Arabia has reportedly threatened “military action” against Qatar should its neighbor acquire Russian S-400 missile defense systems, according to Le Monde, citing a letter from King Salman to the French presidency.

In June 2017, Saudi Arabia, Bahrain, the UAE, and Egypt, among other Gulf states, cut off diplomatic relations with Qatar, accusing it of supporting and funding terrorism. Doha was also accused of “meddling” in the internal affairs of its neighbors and of expressing support for Saudi Arabia’s historic rival Iran.

Now Riyadh is reportedly worried that Doha’s planned acquisition of Russia’s S-400 surface-to-air missile units will jeopardize the “national security” of its Persian Gulf neighbors. According to information obtained by Le Monde, King Salman has recently sent a letter to the French presidency, where he expressed his “deep concern” vis-à-vis the ongoing S-400 negotiations between Doha and Moscow.

If the deal goes ahead “the Kingdom would be ready to take all necessary measures to eliminate this defense system, including military action,” the letter, addressed to President Emmanuel Macron, reportedly warns, asking Paris to apply diplomatic pressure on Doha.

The Qatari Ambassador to Russia in January noted that the countries are at an “advanced stage” of negotiating the purchase of the sophisticated S-400 aid-defense system. At the time, Fahad bin Mohammed Al-Attiyah noted that a military cooperation agreement, signed in October 2017 during the visit of Russian Defense Minister Sergey Shoigu to the Arab state, “opened a path for Russia and Qatar to interact in [the] defense sphere, including deliveries of hardware, training of soldiers and officers, maintenance of weapons and, of course, cooperation of special services.” 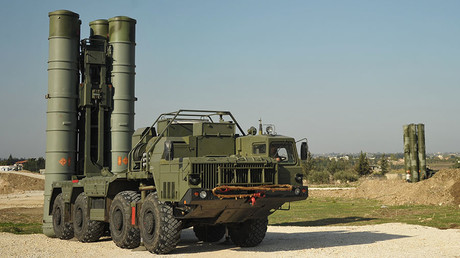 The S-400 Triumf, also known under NATO disambiguation as ‘Growler,’ can detect and intercept almost anything that flies: From strategic bombers to radar and electronic warfare planes, to tactical attack jets, to cruise and ballistic missiles of all sizes and shapes. With this multi-functionality in mind, its only competitor is the tried-and-tested American Patriot, which, however, boasts much more modest specifications.

While Washington has yet to comment on the anticipated purchase of S-400s by Qatar, the US has recently locked horns with Ankara over its decision to secure its airspace using Russian systems. The US continues to insist that Turkey should only be using NATO-compatible systems and buying them from “allies.” Raising the stakes, US lawmakers introduced a bill which seeks to ban F-35 deliveries to Turkey, referring to the country as “increasingly hostile.”

US lawmakers also warned India that procurement of Russian advanced military systems may jeopardize defense cooperation and technology-sharing between Washington and New Delhi, urging the country to reconsider the purchase.