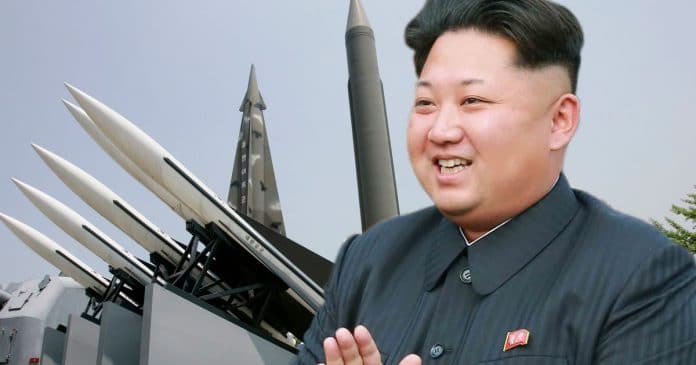 I think the President was right with respect to cancel the summit with the guy with the funny hairdo. Kim Jong-Un is clearly in no mood to make concessions. The re-arranged meeting in Singapore will be a waste of time. The Norks are determined to continue with the nuclear program. The recent North/South Korea summit was a failure, achieving nothing except a photo-opportunity.

The West has very little leverage over North Korea. A Sino-German client state with a failed command economy and no significant exports, North Korea is pretty much invulnerable to sanctions. Yes hundreds of thousands of her people may die, but the regime has never cared for their welfare and isn’t going to start now.

The only way sanctions would work would be if the ChiComs joined in, but they won’t. Part of the problem is a desperate lack of understanding in the West of how the world works. Politicians, economists and commentators obsess on the onshore economy and barely consider the offshore economy, which is several times larger.

Huge sums – in the trillions of dollars – are generated every year by high-yield offshore trading programs, which central bankers and major intelligence players understand, but almost nobody else does. Of course the ignoramuses, as ever, are quick to condemn those in the know as nutters or conspiracy theorists!

When the DVD switched Germany’s support from Japan to the ChiComs in the early 1990s, in response to the collapse of the USSR, China got access to the programs, as well as access to Western technology. The DVD are past masters at technology transfer. Instead of Moscow getting the ‘blueprints’ Peking got them instead.

This gives the DVD and Germany a hold over Peking. Since the DVD set up the Workers Party of Korea and North Korea is and always has been a German client state there is no way that Peking will stop backing Pyongyang. The planned talks with the Norks are therefore pretty pointless.

The Korean War was carefully planned in Dachau, probably from about 1946. The DVD first needed their client Mao Tse-Tung to win the Chinese Civil War, so the early 50s was seen as the ideal start time. The DVD arranged for their man Clement Attlee in London to give the Soviets the world’s most powerful aero-engine, the Rolls-Royce Nene, to power the new Mig-15 fighter. The engine may have been labeled a Klimov, but it was designed in Derby.

The Jerries didn’t just arrange the engine, they also handed over advanced aeronautical research and the blueprints of the B-29. This was then ‘reverse-engineered’ as the Tu-4 strategic bomber. The ‘reverse-engineering’ was of course a cover story.  Reverse engineering is not as easy as it sounds.

The ‘North Korean’ Migs in the Korean War were mostly flown by Adolf Galland’s Me 262 boys, who were no doubt relieved to be flying a jet kite with a reliable engine. A friend of mine was involved in the operation which nabbed the Jerries. It was game over when they started shouting “Achtung Sabres” over the radio. You’re average North Korean pilot does not go around saying “Achtung Sabres”. Indeed, it’s a rare Nork who says “Achtung”, period.

The desperate lack of knowledge of our leaders doesn’t just extend to North Korea and the DVD. Machine politicians like Theresa May are seemingly unaware that Iran already has nuclear weapons. They’re plutonium-cored, using the plute the French shipped to Iran in 2003/4. France has a large black plutonium stockpile.

This was the intelligence that Dr David Kelly was taking to Mossad before his brutal kidnap, torture and murder by GO2. I knew he had been murdered of course – only nutters, journalists and some judges still cling to the theory that David Kelly committed suicide. It’s a bit difficult to kill yourself by cutting a single ulnar artery and even more difficult without a knife. (Corrupt officers in Thames Valley Special Branch reporting to GO2 added the knife, and a bottle of water.)

President Trump was absolutely right to scrap the Iran nuclear deal. It was one of the more pointless international treaties ever signed, even more pointless than the Kellogg-Briand Pact. It’s good to see the President getting access to sensible security advice at last – my friend John Bolton was an excellent choice for National Security Adviser.

If anyone still thought that the SBU and the Ukrainian regime had integrity they must surely have changed their minds after this week’s farce involving the staged murder of Arkady Babchenko. Babchenko is an idiot, no offense intended, who apparently thinks the murder of Russian citizens on a sabotaged transport aircraft is nothing to get upset over.

The whole affair was a nonsense, obviously designed by the SBU to embarrass President Putin. The Russian President is not a killer and clearly did not order Babchencko’s ‘assassination’. This week’s idiocy has severely undermined Kiev’s credibility.

This is the same regime which shot down MH17 in conjunction with the Chinese. It’s high time that Western politicians and the MSM started querying Kiev’s role in the shoot-down. The recent Dutch report on the MH17 shoot-down is a politically motivated travesty which ought not to fool anybody. It’s junk.

This has included A Century of Air Power: The Changing Face of Air Warfare 1912 – 2012 by Dr Dave Sloggett (Pen & Sword, 2013). Dave Sloggett has advised the UK Ministry of Defence and is a respected air power analyst.

It’s an interesting and well-informed book, but marred by irritating errors. At one point Dr Sloggett thinks that HMS Warspite was sunk alongside HMS Prince of Wales in 1941 – Warspite of course was nowhere near Malaya at the time.

Dave Sloggett also thinks that the bombing of Dresden was wrong. He is not up to speed with the latest research on Dresden, which was the fourth largest center of armaments production in Nazi Germany in February 1945. He also fails to mention that the Abwehr/DVD were pushing Dresden as a target – a number of senior Nazis had moved painting, gold and other stuff down there, having been assured that it was off the target list. It was Stalin, who reported to Admiral Canaris, who pushed most strongly for the bombing of Dresden.

It’s a worthwhile book, but like me you may not agree with everything in it.

This entertaining three-part series has just finished on BBC1. I sincerely hope it finds its way onto American TV.

The story is well-known. A gay British MP and leader of the Liberal Party, Jeremy Thorpe, had a long-running affair with a male model, Norman Scott. Scott went to the police and the Liberal Party, so Thorpe hired a hitman to whack him. The hitman missed Scott, but whacked a nice dog, Rinka, which Scott was looking after.

Jeremy Thorpe was tried at the Old Bailey and acquitted, after a less than impartial summing up, with respect, by Mr Justice Cantley. I knew both prosecuting and defence counsel by the way – Peter Taylor QC, for the Crown, and George Carman QC, for the defence. I also bumped into some of the other characters in the saga, including former Home Office minister George Thomas, himself gay.

In a bizarre twist the alleged hitman, Andrew Newton, thought by police to be dead, has turned up alive and well, and quite well off by all accounts. At any rate he owns an aircraft. Even a small airplane is pretty expensive to run these days, at least in Britain.

It was all pretty standard fare for a Liberal politician. Jeremy Thorpe’s career never recovered, of course. He might have got away with having a former gay lover shot, but not a dog.

Norman Scott seems to be quite a nice man, who has been interviewed this evening on BBC Four. Having a gun held to his head and seeing Rinka shot dead was obviously pretty upsetting. There is no doubt that Jeremy Thorpe was guilty, but of course as a keen supporter of EU membership he had Cabinet Office support. In a smart move they undermined the evidence of a key prosecution witness, former Liberal MP Peter Bessell, who was dying of emphesema and short of cash, by having a newspaper offer him a deal which involved extra payment if Thorpe was found guilty. That was a gift for George Carman of course. He was one of the finest cross-examiners at the English Bar.

A Very English Scandal is superbly acted. Hugh Grant plays Thorpe and the supporting cast includes Patricia Hodge. The casting is excellent. The scriptwriters made some basic errors with the legal stuff, however. They kept referring to the ‘stand’, whereas in England witnesses go into the witness box. They also got Mr Justice Cantley’s status wrong – he was never Lord Chief Justice.

Hopefully I’ll be back to weekly columns from next week – I’ve been having a busy time.