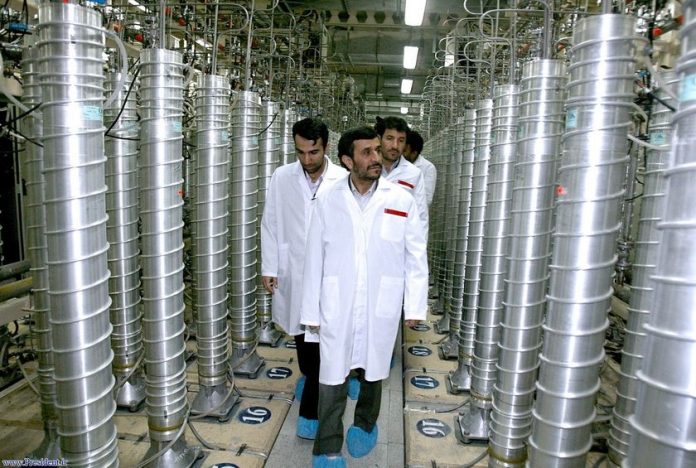 [ Editor’s Note: Iran is responding to Juncker’s twisted statement that the EU would defend the “core” elements of the JCPOA. That language was signaling to Trump that the EU is onboard curtailing Iran’s building up its military defenses, which had not been prohibited under the JCPOA.

Asking Iran to accept having limits on its national defense, which would allow the US and Israel to launch a preemptive strike without fear of a significant retaliatory strike, is a non starter in Tehran. It would be crazy to do otherwise.

Israel has as its standard defense policy that it will not tolerate any potential adversary having military parity with the IDF, and that it will strike preemptively to block that from happening. And of course, the Zionists fear no UN Security Council problems, as the US would veto any resolutions against Israel.

Israel fears, rightfully so, its own ruthless policies being turned around on itself. The US is onboard, as it has adopted the Israeli doctrine, an Americanized version, that it will strike any country it feels might be a threat to it, even at some point in the future. It is a blank-check policy.

This is the language of gangsters and extortionists – that anyone that can defend themselves is considered a national security threat to an aggressor. It violates all international law and the UN charter, which the US and Israel wipe their feet on every day.

So Iran is gearing up the infrastructure for its reprocessing, but staying within the JCPOA agreement. It is sending a message that it is not going to sit on its behind and wait for permission to defend itself.

The back story on this is Iran does not need nuclear retaliation ability. If it were attacked, it can destroy the Saudi Arabian oil infrastructure in a day, but the US could hurt much of Iran’s. Oil prices would skyrocket instantly, causing an instant worldwide recession and a domino effect of bank crashes due to short-term trade finance defaults.

The vast number of victims of such an event would not blame Iran, but the preemptive attackers. The wild card would be, with the US and Israel knowing that, such an attack would usually be preceded by a major terror attack, on the scale of a 9-11 mini-nuke one, to galvanize public support, and framing the preemptive strike as retaliatory.

Our own 9-11 was a test of the public buying the con, and we failed miserably when our patently fraudulent 9-11 commission report was accepted with hardly a whimper.

Mutually assured destruction is still with us, not the nuclear exchange kind, but the crashing of a world economy leveraged to the max, where one good whack will send it all crashing down.

Trump’s war cabinet seems oblivious to the risks, or has chosen war, knowing that without colonizing the world and making everyone serfs, it cannot keep the debt bubble going. Thus ends my cheery missive for the day … Jim W. Dean ]

The Atomic Energy Organization of Iran (AEOI) says the country has begun work to prepare the infrastructure for building advanced centrifuges at its Natanz enrichment facility, while respecting its commitments under 2015 nuclear deal.

“Yesterday, we took the first step and submitted a letter to the International Atomic Energy Agency (IAEA) on the start of certain activities, but we started to take the necessary practical measures today,” Ali Akbar Salehi, the AEOI chief, told a press conference in Tehran on Tuesday.

“If conditions are ripe, I may explain tomorrow night at Natanz one of the projects we have in mind, which is a center for the production of new centrifuges,” he added.

He made the announcements less than a day after Leader of the Islamic Revolution Ayatollah Seyyed Ali Khamenei urged preparations for a potential collapse of the Iran deal, officially called the Joint Comprehensive Plan of Action (JCPOA) following the US’s withdrawal.

The Leader ordered the AEOI to get prepared for a rise to 190,000 SWUs (separative work unit) within the framework of the deal.

Salehi further said that the developing of such infrastructure would move along quickly, adding, “If we were progressing normally, it would have taken six or seven years, but this will now be ready within weeks and months.”

According to Salehi, Tehran has also increased the capacity to generate electricity at the Natanz facility.

The senior nuclear official gave assurances that none of the measures Tehran is taking will violate the terms of the JCPOA.

Late on Monday, the AEOI said it is starting a process to accelerate the preparation of infrastructure for the manufacturing of centrifuge rotors and boosting the domestic capacity for the production of UF4 and UF6 gases.

Behrouz Kamalvandi, the spokesman for the Atomic Energy Organization of Iran (AEOI), told ISNA news agency that Iran will inform the IAEA of the start of the process to increase the production capacity of uranium hexafluoride (UF6), a chemical compound which serves as feedstock for centrifuges.

“In a letter that would be delivered to the International Atomic Energy Agency by the Iranian mission in Vienna, it has been announced that we will begin the process of increasing the capacity for the production of UF6 and UF4 gases on Monday as well as the construction of factories for the manufacturing of centrifuge rotors,” Kamalvandi said.

SWU is the standard measure of the effort required to separate isotopes of uranium during an enrichment process. 1SWU is equivalent to 1 kilogram of separative work.

Under the Joint Comprehensive Plan of Action (JCPOA), Kamalvandi said, Iran was supposed to achieve a capacity of at least 190,000 SWUs by the end of the 15th year since the deal’s enforcement in January 2016.

“We had earlier estimated that we could reach about 250,000-SWU capacity by the end of the 15th year, but given the Leader’s call for us to pursue a 190,000-SWU capacity, we need to take measures to accelerate this process,” the official added.

Achieving that capacity means increasing efforts to set up workshops and factories and providing the infrastructure necessary for moving forward at a high speed, he added.

On May 8, US President Donald Trump announced Washington’s pullout from the nuclear deal, vowing to reinstate nuclear sanctions on Iran and impose “the highest level” of economic bans on the Islamic Republic.

He also said Iran was in “pursuit of nuclear weapons,” a claim that contradicts numerous reports by the UN nuclear watchdog confirming the peaceful nature of Iran’s nuclear work and the country’s full compliance with the accord.

The IAEA head says the agency conducts complementary accesses to all the needed nuclear sites and locations in Iran.

US Secretary of State Mike Pompeo later threatened Iran with the “strongest sanctions in history” if it did not comply with a list of steep demands, including ending uranium enrichment.

Iran has said it will remain committed to the deal for the time being, pending negotiations with other signatories to the JCPOA to see if Iran’s interests would still be protected under an accord without the US.

Tehran’s other partners in the deal – Germany, France, Britain, Russia and China – have all condemned Washington’s unilateral withdrawal and said they would still live up to their commitments as part of the deal.

In his speech on Monday, Ayatollah Khamenei said the European governments should not expect the Iranian nation “to both put up with sanctions and give up its nuclear activities and continue to observe limitations.”

Elsewhere in his remarks, Kamlavandi reiterated that achieving nuclear weapons is contrary to Iran’s religious doctrine.

“Our message is that we will maintain our capacity for activation at a high level. We only agreed to limit [our nuclear program] because for the deal to take effect, both sides had to remain committed to their obligations,” he noted.

VIAPressTV
ATTENTION READERS
Due to the nature of independent content, VT cannot guarantee content validity.
We ask you to Read Our Content Policy so a clear comprehension of VT's independent non-censored media is understood and given its proper place in the world of news, opinion and media.