The Israeli regime has inexorably wounded itself by shooting a 21-year-old Palestinian medical volunteer by the name of Razan al-Najjar. She died on the spot. She was not a terrorist, so there was no way that Israeli soldiers could say that they were just defending themselves.

Razan al-Najjar was not aggressive either, so the regime could not say that she was “refusing” arrest. She was unarmed, so there was no way Israeli soldiers could wiggle out of the fact that she posed no threat whatsoever.

In fact, when al-Najjar was interviewed by the New York Times last month, her message was to the point: “We have one goal — to save lives and evacuate people. And to send a message to the world: Without weapons, we can do anything.”[1]

Razan’s mother, Sabreen, said: “I was afraid for her, but Razan told us she wasn’t afraid, she felt obliged to help and was clearly wearing a medical vest.” So what did the Israeli regime actually say in their defense?

Well, here we go: the regime preposterously declared that the soldiers worked “in accordance with standard operating procedures.”[2] They further declared that Hamas was largely responsible for the death of al-Najjar:

“The IDF (Israel Defence Forces) constantly works to draw operational lessons and reduce the number of casualties in the area of the Gaza Strip security fence. Unfortunately, the Hamas terror organization deliberately and methodically places civilians in danger.”[3]

Complete nonsense! The Zionist regime and the media in the United States have to blame Hamas for things like this because that’s how they have defended ethnic cleansing.[4] Razan’s mother responded by saying: “My daughter was a target for the Israeli snipers. The explosive bullet was directly shot in her chest; it was not a random bullet.”[5] 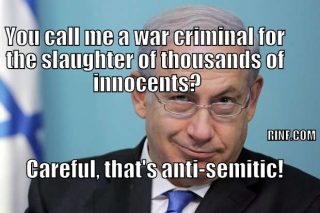 Moreover, we know that shoot to kill has been the operating system of the Israel regime. In fact, they have been using it for the better part of sixty years.

This is not the view of Jonas E. Alexis; this is the view of the Israeli Defense Force. In fact, Israeli officials encourage the IDF to take Palestinians down immediately and without hesitation. Any Israeli officer should be able to “shoot to kill” the Palestinian “without thinking twice…no attacker male or female should make it out of any attack alive.”[6]

As already suggested, this has been the ideological worldview and the diabolical philosophy upon which the Israeli regime is based, and the scholarly sources backing this up is an embarrassment to riches.[7]

Israeli officials, most specifically politician and Minister of Justice Ayelet Shaked, explicitly declare that the Palestinians are their enemies.[8] Prime Minister Yitzhak Shamir compared the Palestinians to “grasshoppers.”[9] Rabbi Yaacov Perrin once declared: “One million Arabs are not worth a Jewish fingernail.”[10] If this seems bizarre, then listen to Israeli historian Benny Morris:

So we do have a problem here. If the Palestinians are grasshoppers, then they obviously deserve to die. According to this view, they are pestilence; they need to be expunged, and the Israeli regime is doing them a favor by shooting them like birds. Moreover, if “one million Arabs are not worth a Jewish fingernail,” then the death of Razan al-Najjar isn’t worth a damn thing to the Israel regime.

Obviously the world is observing that the Israeli regime is playing a diabolical game here. One of my dear colleagues and dear friend, John Jung, wrote me this morning and told me that one of the most popular newspapers in Korea is reacting to Razan al-Najjar’s death.

One commenter declared: “Hitler’s judgment seems to be correct.” In a matter of minutes, the comment received over four thousand likes. Other commenters declared: “Israeli Jews are also villains.” And then another: “The axis of evil in the Middle East is Israel! It forcibly took off the land of the other person, and I eat the murder, and the male terminal animals.” It gets even more interesting—or disturbing:

“Now we see what happens when the Jewish people, who are struck by ideology, have strength.”

“How Israel has become the evil of the world …”

“Peace will come when Israel is gone…!”

“Israel is a group of murderous demons. Korean churches that worship such murderous demons…are dogs who…[worship] the murderous devil.. Will pastors be sent out in the middle of the battlefield where the Israeli army are slaughtering people?”

“Media, banks and global corporations are all Jewish capital. Korea is also renowned as a Jewish capital corporation like Starbucks. The Jews think that the [Goy] is a slave that cannot be saved… When the spirit is established, the Jews will ultimately rule the world.”

“The murderous nation Israel must be forcibly removed from the international community!”

What we are seeing here is that Israeli officials are invariably inciting anti-Israeli or anti-Jewish reactions around the world. And this has been a recurring theme throughout history.

Remember the Hep-Hep riot in 1819 in Germany? Once the mob and the middle class realized that they were economically being reduced to rubble and abject poverty through cheating and other sophisticated means, and once they stumbled upon the real perpetrators, who were largely Jewish, chaos loomed. E. Michael Jones writes,

“Police officers were beaten and thrown to the ground and a military unit which the police called for help was met with a hail of rocks. Ten of the rioters were arrested, and six of them held in jail. The mob then attacked the house of Theresie Huegelin, where the Jew Abraham Loeb Brueckner ran a junk shop.

“After breaking down the door of Brueckner’s shop, the mob smashed the store windows, as well as the windows on the second floor of the building. During the rioting, one of the protesters insulted the royal city commissioner by shouting ‘Hep-Hep’ in his face, and then laughing shouted tauntingly ‘arrest me’…

“The tumult grew so large on August 4 that the president of the council was forced to call in reinforcements. Signs of Jewish businesses were ripped down and trampled on. Finally, the rioters invaded the house of Moises Forchheimer. Forchheimer was not at home at the time, but his wife, who was, was forced to pay the rioters 60 pennies to get rid of them…

“Of the 16 men arrested for rioting in Frankfurt, 15 had either already declared bankruptcy or they were unemployed former soldiers, day laborers or street urchins, a group of people, in other words, who in the best of times were at the periphery of the economy and were being pushed into penury by the influx the lower class Jews who undercut their tenuous connection to the local economy.”[12]

One of the main causes of the Hep-Hep riot again was that the Jewish oligarchs began to cheat the system and sucked the blood out of the middle class. This was never an isolated case. Centuries earlier, we find the same phenomenon in Poland, most particularly during the 1600s.

Jewish historiographer Heinrich Graetz declared that once the Jews began to immerse themselves in the study of the Talmud, wickedness became the rule and not the exception. They immediately began to cheat the system.

Well, the Talmud has always been a problem because it is against the moral and political order. In fact, it is against Logos and all its metaphysical manifestation.[13]

The interesting thing is that Netanyahu has said that the Talmud is Israel’s legal system.[14] If that is the case, then we have a serious problem here because the Talmud views people like Netanyahu as “special” or “gifted” and non-Jews as beasts that need to be used and reused.

So the Israelis and Jewish radicals can solve the anti-Israeli or anti-Jewish reactions overnight by simply denouncing their essentially diabolical/Talmudic activity. Until they do that, then anti-Jewish reactions will continue to spread like wild fire around the world. And who would have believed that Korea would begin to see things in a different light?