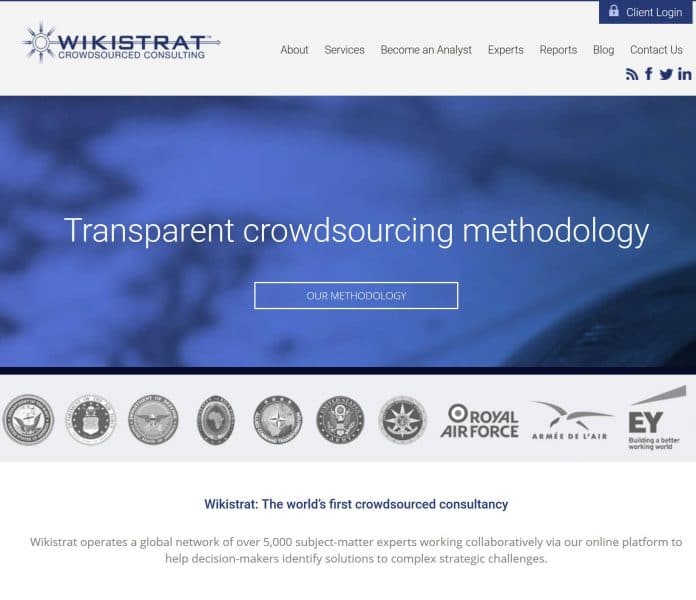 Ken Klippenstein for the Daily Beast

“According to internal Wikistrat documents marked “highly confidential and sensitive material,” 74 percent of the firm’s revenue came from clients that were foreign governments.” (Intelligence agencies of Israel, the UAE and Saudi Arabia, Trump’s primary beneficiaries)

Editor’s note: When Donald Jr. met with this loosely described foreign intelligence agency front operating on laundered funds to rig the election, he crossed so many lines that pardoning him might well be unthinkable. It is not.

As we now move closer to the core of Trump, Kosher Nostra stooge and capo, we find firm after firm, all Israeli, all Mossad/8200 fronts, all engaged in espionage against the US.

Crowd-funded hardly, this is an Israeli firm running on “donations” from the military intelligence budget of the UAE specifically to “influence” American elections. By “influence,” we mean creating software, black propaganda, even organizing events including fake stories but quite possibly terror events as well.

There are NO lines they haven’t crossed. When you hire professional killers to “consult” on issues, well what are the issues here?

How can America’s military and nuclear capability be used to bully Russia, crush NATO independence, start trade wars, aid ISIS and al Qaeda and keep the media busy tracking down school shooters and terrorists from the “MK Ultra” stockpile built up during the 1970s and beyond?

Worse still, men like Mike Hayden, former CIA and NSA director, put themselves up as front men for the Mossad to hide behind. It is like Hayden had put on his stupid-hat again, suckered into a nightmare because his tenure in DC had made him hungry, lazy and willing to do anything to get a seat at the table.

We don’t hate Hayden, there are far worse people in the world. We do hate that he allowed himself to become a useful idiot, part of a criminal conspiracy against the United States… Gordon

In the fall of 2016, Donald Trump Jr. and other key aides to the future president reportedly met in Trump Tower with Joel Zamel, the founder of a company called Wikistrat. Wikistrat bills itself as a “crowdsourced” geopolitical analysis firm based in Washington, D.C. But interviews with current and former employees and documents reviewed by

The Daily Beast tell a different story: that the vast majority of Wikistrat’s clients were foreign governments; that Wikistrat is, for all intents and purposes, an Israeli firm; and that the company’s work was not just limited to analysis. It also engaged in intelligence collection.

Robert Mueller’s office is investigating Wikistrat and Zamel, according to The Wall Street Journal, as the special counsel’s probe expands into Middle Eastern (governments’ attempts to influence American politics.