If you’re able, and if you like our content and approach, please support the project. Our work wouldn’t be possible without your help: PayPal: [email protected] or via: http://southfront.org/donate/ or via: https://www.patreon.com/southfront, BTC: 13iYp9CDYZwgSnFXNtpEKgRRqaoxHPr2MH, BCH: 1NE49pQW8yCegnFCMvKuhLUnuxvTnxNUhf, ETH: 0x962b312a9d41620f9aa0d286f9d7f8b1769bfae6

Units of the Syrian Army’s 11th Armoured Division have been delpoyed in the northern part of the Syrian-Lebanese border where they are set to replace Hezbollah fighters. The area of Qusayr has been one of the key Hezbollah footholds in western Syria. It is unclear if it will be abandoned.

According to some pro-government sources, Russian military police units are also withdrawing from the border area.

The situation over the northern town of Manbij has been rapidly developing since the US and Turkey endorsed a roadmap for the area.

On June 5, the Kurdish People’s Protection Units (YPG) announced that their “military advisers” will leave the town. The militia claimed that its forces withdrew from Manbij in November 2016, but the military advisers remained to work with the Manbij Military Council (MMC). However, the group said its forces will be redeployed there once again if this is needed.

Both the MMC and the YPG are part of the US-backed Syrian Democratic Forces (SDF). However, the YPG and its political wing the PYD clearly dominate within the group.

At the same time, Ankara says that the YPG is a local branch of the Kurdistan Workers’ Party (PKK) and describes them both as terrorist groups.

On the same day, Turkish Foreign Minister Mevlut Cavusoglu stated that Kurdish forces in northern Syria will be disarmed in the framework of the reached roadmap, which will also include the area east of the Euphrates. According to Cavusoglu, Turkish and US intelligence, military, defense officials and diplomats are set to hold a preparatory meeting in 10 days to set a foothold for the implementation of the plan.

According to the Turkish side, the roadmap will reportedly include 3 stages and will be fully implemented less than in 6 months.

While the US is yet to comment on Cavusoglu’s statements, it becomes clear that the YPG may find itself in a very complicated situation. If Ankara and Washington find a common ground over the situation in Syria, the YPG’s importance as a tool of the US foreign policy as well as the US support and supplies will decrease dramatically. 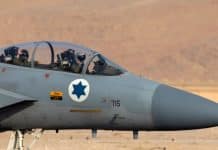 Continued Israeli airstrikes on Syria are testing Moscow’s patience, Jerusalem would do well not to poke the Russian bear