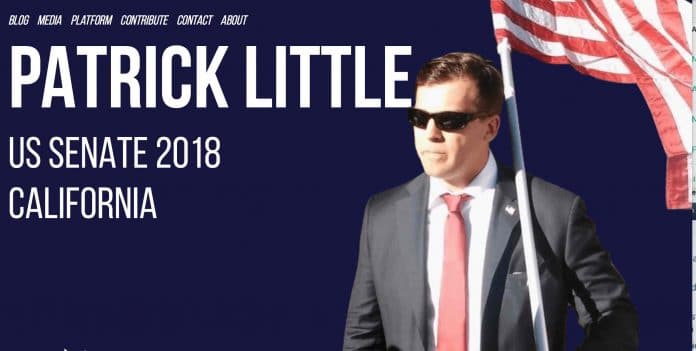 Note: The Zionist MSM is reporting that Patrick Little polled 1.2 percent in the California primary—down from closer to 20% a month ago. Was the MSM smear campaign really that effective? Or was it the usual rigged voting machines?

First hour: Front-running Republican California Senate candidate Patrick Little was thrown out of the California Republican convention. He’s getting smeared as a “neo-nazi” all over the mainstream media. But check out his website and his platform and you may find a lot to agree with, as well as things to disagree with. Personally, I love his focus on Israel’s false flags against the USA. (Watch him stomp and spit on the Israeli flag while decrying treasonous Zionist false flag attacks on America.) Any federal politician NOT making this a front-and-center issue should be charged with either high treason or terminal idiocy.

Disclaimer: As stated during the show, I disagree with Pat’s exaggerated and monolithic anti-Jewish statements. (For a brilliant and fair-minded assessment of the issues he raises, read Laurent Guyénot’s From Yahweh to Zion– and check out the promo video.) But I do understand why, as a veteran of the 9/11-triggered wars for Israel, Pat feels enraged and betrayed. If you don’t like what he says, refute him—don’t call him names, and for God’s sake don’t censor him!!! Suppressing righteous anger through ill-considered censorship will only make the explosion more destructive when it finally breaks out.

Second hour: Barbara Honegger joins us to discuss the Lawyers’ Committee for 9/11 Inquiry‘s petition to seat a grand jury to investigate the unsolved crimes of September 11, 2001. (Watch the video of the Press conference announcing the petition’s filing.) Other topics include: 9/11 activists’ letter to Iran asking Iran to appeal Judge Daniels’ ruling ordering Iran to pay $6 billion reparations for 9/11; Barbara’s recent European speaking tour with Richard Gage, AIA, of Architects and Engineers for 9/11 Truth; the direct link between The October Surprise [the real story behind the Iran side of Irangate] and ‘Spygate’; and more.

Barbara Honegger is a leading researcher, author and public speaker on the 9/11 Pentagon attack and the anthrax attacks.

Her pioneering book October Surprise, on the deep story behind the Iran side of the Iran/Contra scandal, now confirmed by formerly classified documents, led to a full-subpoena-power U.S. Congressional investigation.