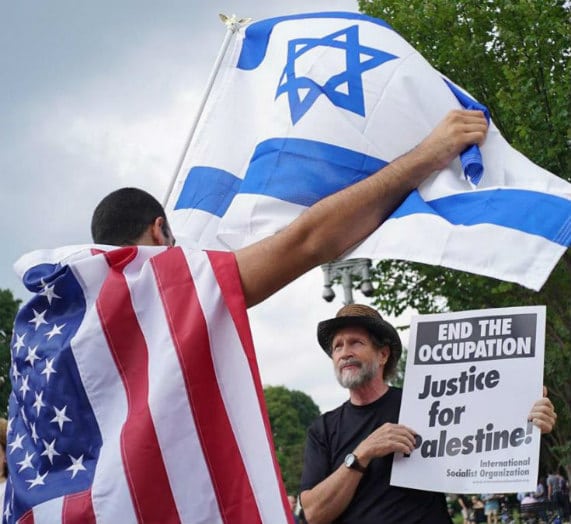 But for the US and the leadership of the American Jewish Zionists, the Israelis and Palestinians could have achieved peace a long time ago.

The recent decision by the US to veto (44th veto to protect Israel) a Kuwaiti-sponsored UN Security Council resolution providing protections for Palestinians is yet another shameful act of political prostitution to Israel and those within the United States that have always stood in the way of peaceful settlement in the Middle East and those who are fanning yet another war in the Middle East.

The Americans did it, French did it, the Dutch did it, the Belgians did, the Norwegian did it; the entire continent of Europe took up arms to fight and defeat the Occupying German Nazi Army.

Even the Polish Jews took arms and fought the invading Germany army, in what is best known as the Warsaw Ghetto Uprising.

Why is it that the entire world has the right to fight and resist an occupying foreign army – but not the Palestinians?

Even the Africans took up arms against colonial powers in Africa; and one needs to remember the one million people who died in Algeria fighting the French colonial army.

We Americans must not forget the brave Vietnamese who fought us and the French for over 40 years, and yes, they earned their freedom, and finally we recognized their right to fight us.

However, the US veto does not cover armed resistance; it covers peaceful resistance of an Israeli Occupation that lasted 51 years, even if we have to forget the Jewish Zionist invasion of Palestine that culminated in the forced exile of over 700,000 in 1948.

Gaza, poor Gaza under siege by the Israelis for over 12 years with total closure, creating the biggest prison in the world and with the only thing missing the gas chambers to distinguish it from the German Nazi camps where millions of Jews were killed.

The US and many of the so called “World Community” once again and shamefully did not object to the targeted killing of peaceful demonstrators demonstrating within their own prison, where over 1100 were killed and over 3,500 suffered permanent injuries. Israel demonstrated its criminal behavior by targeting a medical team and assassinated a young Palestinian medic, Razan Al-Najar. Then Israel boasted about it.

Yet, when Hamas fired its useless so-called “missiles” that never did any damage of consequence or kill anyone, the entire “world community” competed with each other to condemn such criminal behavior, and never objected to Israel using its mighty air force to bomb the hell out of Gaza, or to its use of professional snipers to kill and maim.

Ever since the times of Lyndon B. Johnson, the cowardly Commander in Chief who refused to allow a Naval Board of Inquiry to proceed after Israel deliberately attacked the USS Liberty, killing 34 and injuring 171 – “ we do not want to embarrass our Israeli friends” – the US has provided cover for all Israeli criminal behavior, from invasion of Lebanon several times, to bombing Tunisia and Baghdad, to bombing Syria and Yemen, and of course the several mini wars against poor Gaza, killing over 10,000 and injuring over 25,000 and destroying some 30,000 homes.

The US always used its veto powers to shield Israel from any responsibilities under international law.

Even with a “peace agreement” between the PLO and Israel in what is known as the Oslo Accord, Israel continued to kill and murder thousands of Palestinians, continued to jail over one million since 67, destroyed over 50,000 homes since 67, and subjected over 3 million Palestinians to daily humiliation at 550 “security check points”. All of this happens while its partner, the PLO, dedicates 80,000 strong Palestinian Security Forces to provided added “ auxiliary” security protection to the Israeli army and to its armed, trespassing settlers.

The US was never honest about its mediation and role as a “peace broker”, having appointed Israeli and American Jewish Zionists as its special “peace envoys”, while providing Israel with the ever present veto and providing Israel with tens of billions for weapons for use to continue its armed occupation. Since the despicable Lyndon Johnson, every president, whether Republican or Democrat, always was on the side of Israel – right or wrong.

In the end, the people of Palestine will prevail and will force Israel and the US into the One State Solution, even it takes 20 more years. Defeating Apartheid Israel will not be achieved with guns, but with Civil Resistance.