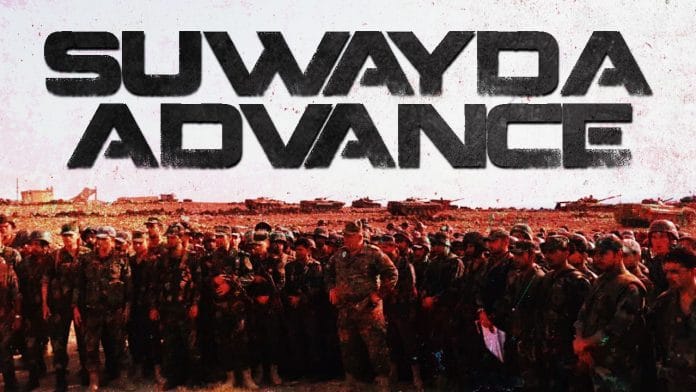 Syrian government forces have launched a military operation against ISIS cells in eastern al-Suwayda and have already established control of the village of Ashrfya and the area of Beir Aura. Battle tanks, artillery units and warplanes actively supported the advance.

According to the Syrian Observatory for Human Rights (SOHR), 15 soldiers and officers of the Syrian Arab Army (SAA) and 9 ISIS members were killed in the clashes. However, this number of casualties allegedly includes results of the SAA-ISIS clashes near the T2 pumping station near the border with Iraq.

A source in the 9th Division of the SAA told SouthFront that ISIS members in eastern al-Suwayda are poorly armed. So, no serious ISIS resistance is expected there.

The US-backed Syrian Democratic Forces (SDF) captured the villages of al-Murjan, Kulib Tahtani, al-Khuirah and seven farms north of the town of Dashisha near the Syrian-Iraqi border.

According to the SDF, its fighters had killed 42 members and 2 commanders of ISIS during their advance towards Dashisha.

The Syrian Liberation Front (SLF) and several Free Syrian Army (FSA) groups, including Jaysh al-Izza, Jaysh al-Ahrar and the Suqour al-Sham Brigades, are planning to merge their forces in order to form a unified group in the province of Idlib. The SLF was established in February after a merger of Ahrar al-Sham and Nour al-Din al-Zenki.

In late May, 11 other FSA groups created the Turkish-backed National Front for Liberation. Idlib militant groups are uniting larger groups in order to strengthen their position ahead of the expected developments after the SAA finishes dealing with militants in southern Syria.