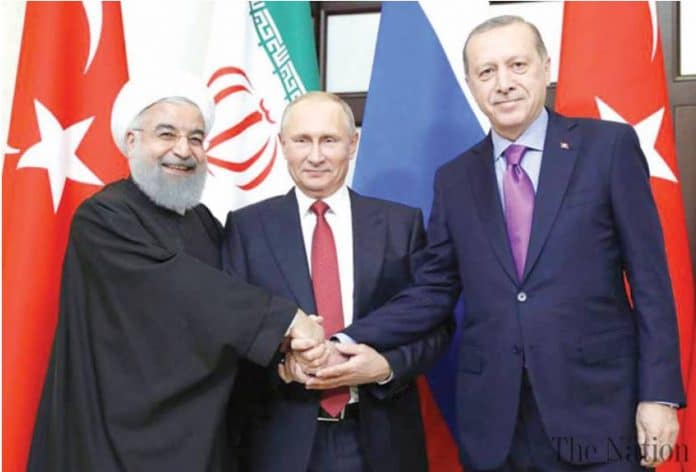 Vladimir Putin will have paid very close attention to the location of the Syrian artillery battery where four Russian soldiers lost their lives at the weekend. The desert around Deir ez-Zour remains a dangerous place – politically as well as physically – in which the Americans and Russians play an extremely risky game of war.

Putin still suspects the Americans helped the artillery guidance of a mortar battery which killed the commander of the Russian Far East 5th Army in Deir ez-Zour, lieutenant general Valery Asapov, less than a year ago. Was the mortar fired by pro-American Kurdish fighters? Or by Isis? The Russians say that Isis mobile attackers stormed the Syrian artillery position this weekend at night – the Islamists’ normal routine, streaming out of the desert wadis in suicide trucks and motorcycles – even though the little Syrian forts, hillocks of sand and cement strewn across the vast sand plateaus, are supposed to be invulnerable.

So now the Russians are directing artillery. First they were the air component to the Syrian army, their forward air observers on the ground with Syrian troops directing the Sukhois onto Assad’s enemies. Then the Russians were the de-miners of Palmyra and Deir ez-Zour, Homs and Aleppo. Then the Russian military police escorted the beaten jihadists to the wastelands of Idlib province or the Turkish border. The Russians liaise between the Syrians and the pro-American Kurds on the Euphrates River.

Twelve months ago, Putin’s top artillery technicians were searching through the rubble of eastern Aleppo to draw up painstaking maps of the fall of shot – the exact bomb crater and blast effects of air-dropped Russian munitions. I met one of their teams. Its reports were circulated, of course, to Russian military intelligence. But they first go directly to the Kremlin.

Putin reads them. He is a micro-manager. There will be no Brezhnev-style Afghanistan disasters in Syria – or so the Russians pray – no slovenly retreats across the Amu Darya by political generals, no Kremlin lethargy. Russian officers speak good Arabic (and quite good English) – products of the Moscow School of Foreign Languages – and, like the Syrian army, their officers go to the front lines.

That’s why Asapov was killed. Putin decided to pursue his Chechen and Russian jihadi enemies all the way to Syria – and kill them all. He saved his ally, Bashar al-Assad. But at the very same time – give or take a warning or two and one downed Russian jet courtesy of a later-to-repent Erdogan – he remained a trusted friend of Israel, Iran, Turkey, Egypt, Lebanon, Saudi Arabia and so on.

Egypt’s Sisi takes Putin to the opera in Cairo. In the Kremlin, Putin welcomes King Abdullah of Saudi Arabia. He welcomes the Qataris. He pays court to Iran’s Rouhani. He listens – glowering, to be sure – as the Supreme Leader Khamenei explains the evils of American interference in the Middle East (this only two years ago). Mercifully, the Iranian did not mention the Russian invasion of northern Iran in the Second World War, nor its setting up of Soviets in Azerbaijan and Mahabad in Iranian Kurdistan when the war was over.

Putin sheds as few tears over the Russian mercenaries who die in Syria fighting the Kurds as he did over the Kurds who died defending Afrin from the Turkish army and its Isis cohorts. That deal seems to have been simple. The Turks could have Afrin province – for the time being – if they let the Syrians and Russians clear the Islamists out of Idlib province in the future (note: watch out for this war).

And a bigger compromise seems to have been achieved with the Israelis. They could hit the Iranians if they wished, but no war on Syria, no Israeli (or American) no-fly zones, and – above all – no war with Iran. The Iranians don’t want a war with Israel (neither side would win, as Netanyahu knows), and in Tehran, Putin is the voice of common sense. Once it was the State Department which called for “restraint on all sides” – usually when the Israelis were invading or bombing Lebanon or Gaza – but now it’s the Kremlin which calls for “restraint” between Israel and Iran.

So to what degree has Putin’s shrewd, hard, sardonic character brought all this about – and how much did Trump’s instability and unpredictability hand Russia its political triumph in the Middle East ? It’s tempting to say a bit of both. But I suspect that an Obama might have provided a regional equilibrium which Putin has now claimed for himself. When Moscow is now the interlocuteur valable in the Middle East , it’s difficult to take the gift of equilibrium politics away from Putin. Europe’s case is hopeless.

Europe cannot engage with a Kremlin that still occupies part of Ukraine and annexes the Crimea. It showers sanctions upon Russia. But it grovels like the Americans to an Israel which occupies the West Bank and annexes Jerusalem and Golan; and the very word “sanctions” – or disinvestment – cannot be mentioned in Europe without accusations of anti-Semitism.

Israel can fire off its missiles into Syria after claiming that Iranian missiles had fallen on Golan – actually Israeli-occupied Syrian Golan, although that got a little lost in the telling – but Putin is not going to order an end to Golan attacks. There is a strong suspicion that it was the Syrian army which fired those missiles at the Israelis – in retaliation for the constant Israeli bombing of Syrian forces (never Isis forces, of course) over the last three years. Thus the Israelis, fearful of a reopening of the “South Lebanese Front” in a future war with Hezbollah, have unthinkingly opened a “Golan Front” – along a border which has been largely silent for 45 years. It’s the kind of equation Putin can savour. Be sure, he’ll be there to intervene if anyone needs him.

And he’s insisting that it’s the Syrians who move onto the Golan plateau on their own. No Iranians. No Hezbollah. The Syrians can’t object if they’re back on their border with occupied Golan. And the Israelis can’t object if Russia keeps the Iranians and the Hezbollah out. “Deconfliction”, the Russians like to call this. Everyone backs off. No war on Golan. That’s the hope.

As for what the “experts” like to call geopolitics, Putin immediately understood the need to uphold the Iranian nuclear accord when Trump tore it up. At one stroke, he became a closer ally of Iran, he could sympathise with Europe and he was able to present himself as steadfast in a treaty he signed with China. But he is entering a potential market war with the US – a dollar war – alongside a Europe whose governments may be prepared to stand up to Washington (some of them, at least), but whose big businessmen are already showing their usual cowardice in the face of American profit and loss.

There is something scornful about all this. Putin is not going to worry about Russian mercenary deaths in Syria; their activities are intended to test American military willpower in Syria. Nor does America weep for its Kurdish mercenaries, or protect them in Afrin.

Putin is not going to scream about human rights abuses in Gaza – the shooting down of unarmed demonstrators or the Israeli destruction of clinics or hospitals – when his own jets have been destroying clinics and hospitals in Syria. He sticks to the “war on terror” – and being an ally of all. The children may rattle their toys, but the tsar has the keys to the nursery. The crackpot in the White House neither knows nor cares nor, one suspects, understands. He long ago opened the door for Putin – and Putin walked straight through it.–Independent