The U.S. and NATO war mongers/war profiteers/occupiers /perpetrators of war crimes in Afghanistan demand everything of their Afghan victims – they require nothing of themselves. Without justice there can be no peace.

Afghans have suffered for almost four decades without justice. The horrendous war crimes committed against the Afghan people by the Australian special operation forces, by the United States and its agents/mercenaries and by NATO forces are the true impediment or roadblock to negotiations and peace. It is not the Afghan Freedom Fighters.

As recently revealed in the Australian Sydney Morning Herald newspaper, Australia has determined that from 2001-2016, its special operations forces under NATO have committed horrendous war crimes against Afghans in the United States’ and NATO’s war in and occupation of Afghanistan. Those revealed war crimes are just the tip of the iceberg.

Many horrendous war crimes have been committed by United States’ forces and its agents/mercenaries and other nations’ forces under NATO, which have been ignored and swept under the rug since the United States’ invasion of Afghanistan. Many Afghans and others have documented these crimes but a blind eye is turned and nothing has been done to stop these crimes and to bring justice. 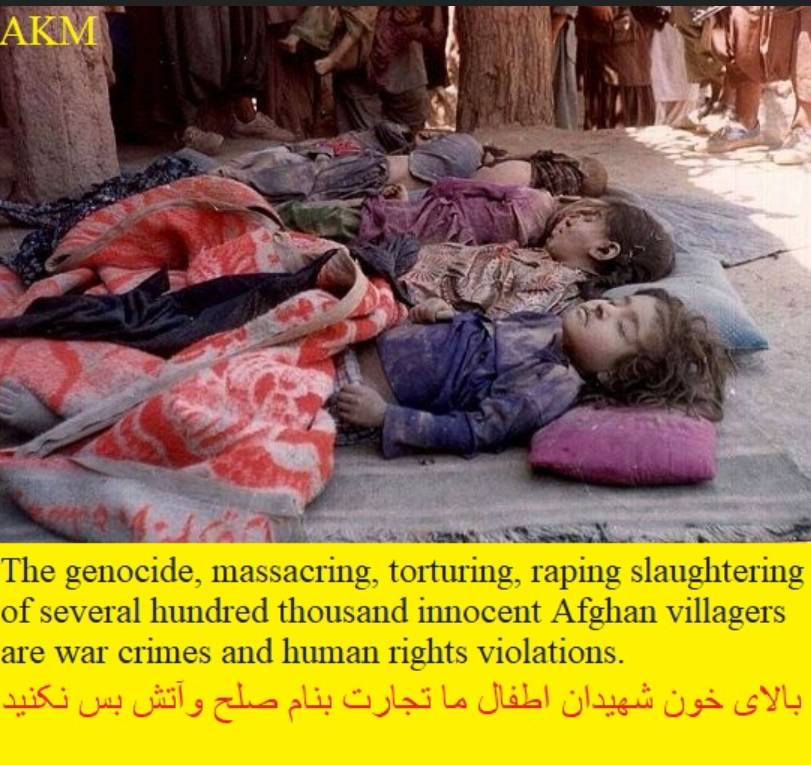 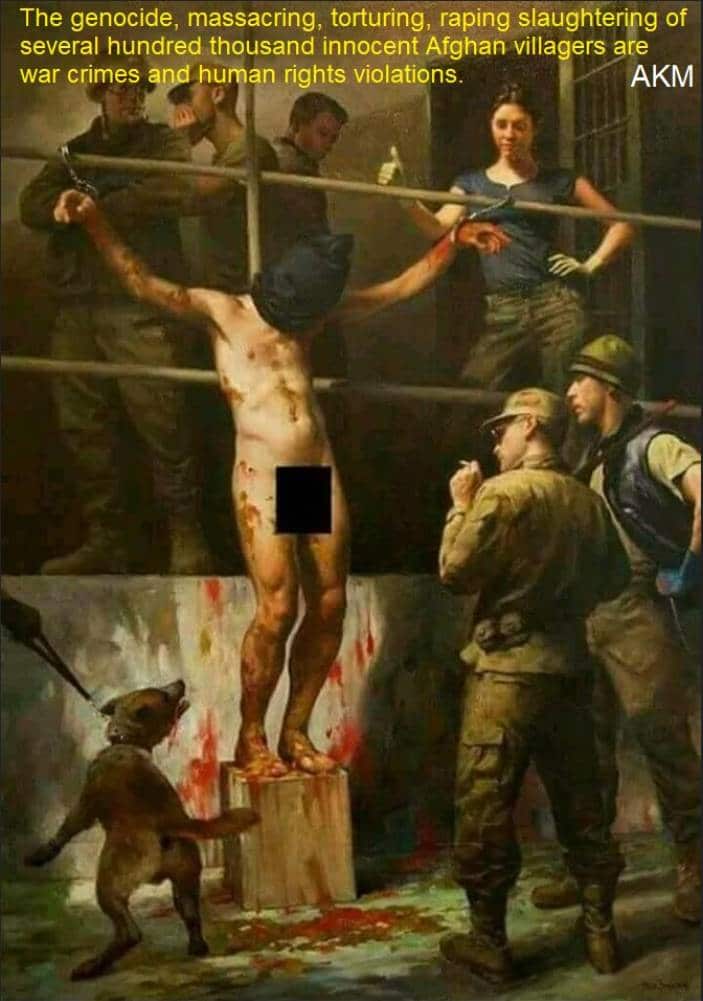 The Afghan villagers want peace, but there cannot be peace without justice, which requires that first there be an end to the U.S. war and occupation of Afghanistan. There also must be transparency, investigations, accountability, prosecutions, justice and humanity by the United States and NATO forces. There must be an end to their war crimes. The U.S. and NATO must accept its loss in Afghanistan.

These horrendous war crimes committed against the Afghan people by the Australian special operation forces, by the United States and its agents/mercenaries and by NATO forces are the true impediment or roadblock to negotiations and peace. It is not the Afghan Freedom Fighters.

Would it be rationale for an Afghan villager to eagerly sit at a peace negotiations table with the perpetrators of these war crimes? Would it be rationale to expect an Afghan villager/freedom fighter, whose child was killed, wife raped, culture disrespected, home invaded, home bulldozed, village bombed, religion disrespected, natural resources and treasures stolen, and a country occupied, to eagerly sit to negotiate peace with the perpetrators of those crimes? There needs to be an immediate end to war crimes, an immediate end to the war and occupation and there must be a true seeking of justice before rationally there can be peace.

The war mongers/war profiteers/occupiers /perpetrators of these war crimes in Afghanistan demand everything of their Afghan victims, they require nothing of themselves. Without justice there can be no peace. 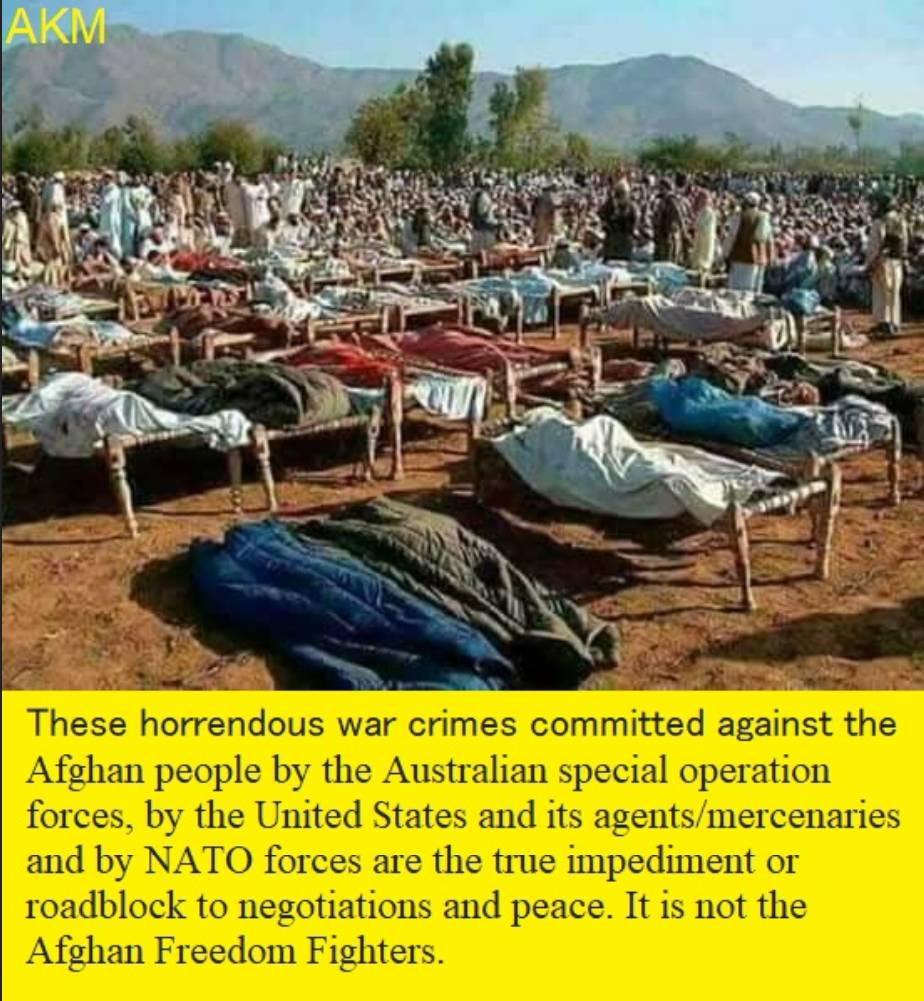 During these past seventeen years, the U.S. with its war strategy, has terrorized Afghan women and children in the villages. Every day Afghan women and children, especially the Pashtun, are raped, kidnapped, tortured, bombed, their houses demolished, their Rare Earth Elements and other natural resources exploited, imprisoned for political views, forced into prostitution, and killed.

In many spots in Afghanistan, the U.S. especially its CIA, holds Afghan women in secret detention centers.

The United States has and is committing war crimes against the Afghan villagers. The majority ethnic group, the Pashtun, who are the natives, who live in areas rich with Rare Earth Elements, are being ethnically cleansed and genocide is occurring. A peace conference is not gong to stop this terror. There has to be an end to the U.S. war and occupation, which has been escalated by the Trump Administration. 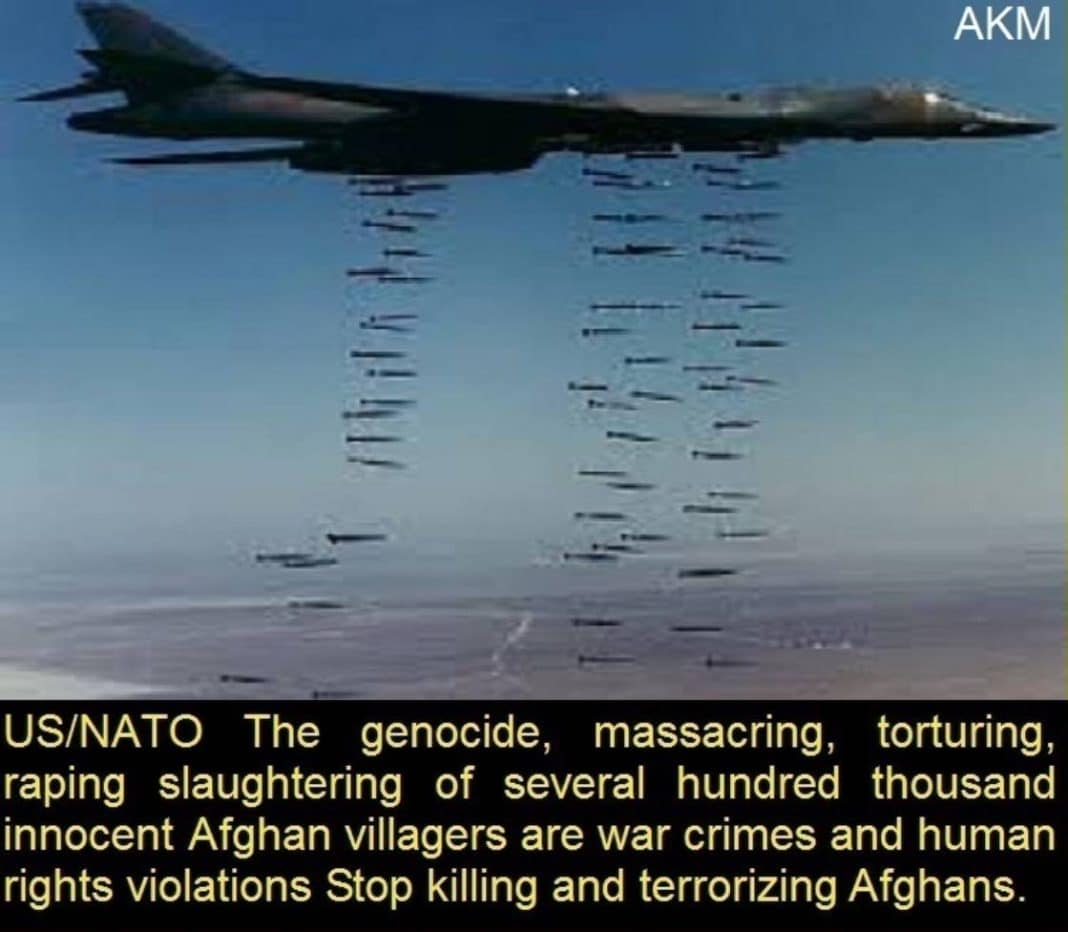 I am concerned about the United States and Afghanistan. The United States is my homeland and Afghanistan is my motherland. History does repeat itself. In the 19th century, the British superpower lost its wars in Afghanistan. Soon after it lost its status as a global superpower. In the 20th century, the Afghans defeated the Soviets, who were forced to withdraw in 1989. It lost the war and was drained economically by the decade long war. Soon after the Soviet Union fell apart, the Warsaw Pact was demolished and it did not exist.

In the 21st century, the United States invaded Afghanistan and has occupied it and waged war for 18 years. It has spent trillions on this war/occupation, but yet it has not won anything. In fact, the U.S has more debt and is less secure. Only the war profiteers have won and lined their pockets. The United States has borrowed trillions from China and others. China is winning.

Right now, the U.S. must be very careful not to slip down the slope like the former superpowers because China and Russia want to see the United States fail and topple economically. China wants to be the only superpower. Russia wants to be with China and be a superpower again.

Afghanistan is a money pit and a war that cannot be won. I believe the solution is that the U.S. must change its policy from a war policy to a peace policy. The war profiteers are pushing for a continuation of the war. To achieve true peace, the U.S. must carefully hold direct negotiations with the Afghan resistance and hold sincere talks to bring true peace. Otherwise, I fear that the U.S. will crumble just like the other superpowers have and there will not be peace in Afghanistan. Both countries will lose. If the United States continues on the same course in Afghanistan, China will be the only superpower.

As history has shown, Afghanistan is the graveyard of empires. I believe that may happen to the United States if Americans do not wake up. With President Trump, who appears to be the Russia’s selected puppet, the war will escalate. There is no winning for the U.S., which is exactly what Putin wants.

The Trump Administration is not letting the American people know what really is happening in the war which is evidenced in the Pentagon’s refusal to release the Afghanistan’s war data, which has always been done in the past. As a democracy, the people have a right to know. In his State of the Union address, Trump did not talk too much about Afghanistan and Russia because he has everything to hide about these two issues. Our democracy is of the people, by the people and for the people. Trump thinks it is all about him.

This war and occupation in Afghanistan, with JSOC special operation forces, CIA operatives and private mercenaries is beyond the rule of law, outside congressional oversight and fits the definition of terrorism. The Afghan villagers, who are the majority, are the victims of these terrorist acts. They are the victims of these war crimes. These war criminals, Afghan and American, whoever they are and whatever positions or jobs they hold, including the executive office, must be prosecuted in lawful tribunals for these crimes.

In addition, the United States “selection” of and support of an Afghan puppet government with communist war criminals, the same old warlords and thugs, CIA agents and drug traffickers in in high positions in the Afghan government is not “responsible”.

It is obvious that the U.S. is using these puppet war criminals and thugs to do its dirty work, which means getting rid of the Afghan/Pashtun majority, who are the road block to the United States’ and its war profiteers’ long term plans for Afghanistan, i.e. permanent U.S. military bases and control of and exploitation of Afghanistan’s Rare Earth Elements (REES), which just happens to be in the Pashtun areas.

Sincerely,
Kadir A. Mohmand
Former Representative of the Afghan Mujaheddin for North America during the 1980s
https://www.smh.com.au/politics/federal/sas-soldiers-committed-alleged-war-crimes-in-afghanistan-official-report-20180531-p4zikl.html

War Crimes and the White House: The Bush Administration’s Cover-up of the Dasht-e-Leili Massacre