[ Editor’s note: There is a simple way of telling if someone has had too much “Zio-kool-aid.” They blame “Jewish” George Soros for “Greater Israel” and his support of the neocons and Israel’s extremism.

They cite him and his support of Hillary as evidence she is “workin’ for da Jeuze.” As you will note below, Russia has a hardon for Soros. He is a Hungarian by birth and never forgot the Russian/Soviet slaughter of 1956.

Have you forgotten?  Don’t know what happned?  Hmmm.

Anyway, for those of you who don’t get into discernment or critical thinking, no time, no brainpower, bad brain chemistry or infected with “evangelical” disease, you need to know this:

Soros fought Bush, he fights Israel, he opposed the war on terror and the police state in the US.  When he was buying full page ads in the NYT, where were you?

The Soros ads have been cleaned by Google, can’t be found but this anti-Soros ad is featured by Google.  Google, of course, is how Israel controls the internet, controls America’s “idiocracy” and gives us YouTube.  Fakebook was theirs from day one, both exist to spy on everyday Americans but we digress.

What I suggest is baiting your stupidest friends on the issue of Soros and Hillary, now that we have a president obviously owned by the Kosher Klown Korps.

Our Russian friends need to get over Soros, grow up and, in the process, grow a pair.  Whining is never appreciated… Gordon ]

Controversial billionaire George Soros is up in arms about Donald Trump again, claiming the US leader wants to “destroy the world” and needs to be kicked out of office.

Donald Trump is the “ultimate narcissist” who “is willing to destroy the world”, Soros told the Washington Post on Saturday. He added that, if the Democratic Party wins the general election this November in a “landslide” and proceeds with an impeachment, he would support removing the president from office.

The two share a history of bad blood dating back to the 2016 election. As one of the top backers of Trump’s then-main rival, former Secretary of State Hillary Clinton, Soros gave more than $10.5 million to her campaign, according to the DC-based Center for Responsive Politics. And Trump’s stunning victory later had reportedly caused Soros nearly $1 billion in losses. 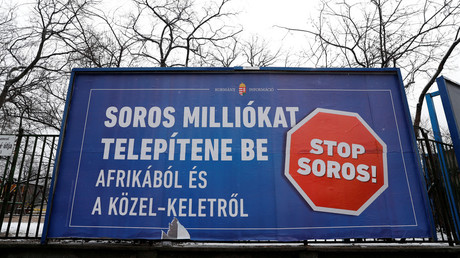 Amassing his tremendous wealth through investments, Soros gained a reputation as one of the most profitable speculators in the stock market. He made around £1 billion in 1992, effectively crashing the British pound. The event became known as Black Wednesday, and remains one of the worst shocks experienced by the British economy.

After the fall of the Iron Curtain, liberal-minded Soros attracted more notoriety while funding a network of NGOs in Eastern European countries. Over the years, his views clashed with the Hungary’s right-wing government, led by the Fidesz party.

The nation’s Prime Minister, Viktor Orban, accused Soros of slandering Hungary and meddling in the country’s internal affairs, particularly trying to force Budapest to accept migrants and refugees. In 2017, Orban launched a campaign against the billionaire, fitted with anti-Soros billboards across the country’s capital, and tightened the laws on NGOs, prompting Soros’ Open Society Foundation to cease operations in Hungary. Soros’ spokesman denounced the campaign, accusing the Hungarian authorities of spreading anti-Semitism.