An Anglican priest has blasted the notorious NGO, the White Helmets, for keeping injured Omran Daqneesh, the boy, whose bloodied and dusty face became the “symbol of Aleppo’s suffering,” without treatment for nearly an hour to take a picture of him in a propaganda exercise against the Syrian government.

Many mainstream media outlets show reluctance in covering the exposure of the most infamous fake about Syria, and it took The Times a few days to report on the Reverend Andrew Ashdown’s revelations.

READ MORE: US May Try to Rebrand White Helmets Due to Negative Publicity – Journalism Prof

As he visited the School of Oriental and African Studies in London, accompanied by a member of the House of Lords, Baroness Caroline Cox, the priest accused the White Helmets and western media of waging a distortion campaign, and presented the picture of him with Omran, telling the story behind one of the most haunting images of the Syrian war. 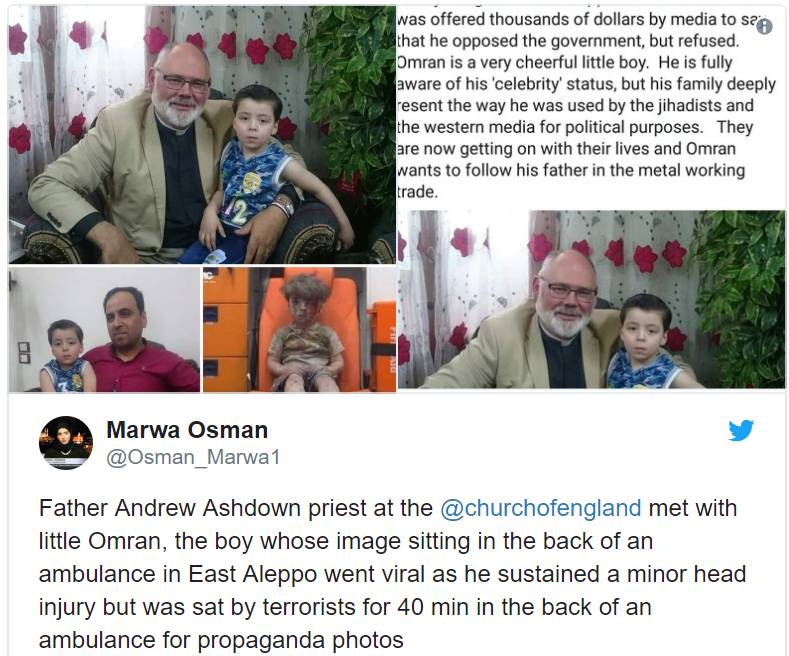 Ashdown met Omran when he visited Syria in April and learned that the viral snap was taken after the boy’s brother had been killed in an explosion.

“He was injured and covered with dust and in shock. He was picked up by the White Helmets and placed in the back of the ambulance and forced to sit there without treatment for 40 minutes while they photographed him. His father was furious but couldn’t intervene because they were militants. The White Helmets are militants. Later the international media offered his father thousands of dollars to say that he was against the Syrian government. The family had never supported the rebels and he refused to accept the money,” the priest said.

The Reverend Ashdown went on to say that the White Helmets were close to jihadists, and his words were later echoed in Baroness Cox’s speech, who previously told Sputnik that “British taxpayer’s money” was being given to the “jihadist group in Syria.”

“Your taxpayer money is going to groups certainly associated with jihadist groups,” she said, adding that the tripartite strikes by the US, France and the UK against Syria in April were illicit, and it was “extremely improbable” that President Bashar al-Assad had ordered a chemical attack on civilians.

The White Helmets, who claim to be a group of volunteers risking life and limb to save the lives of thousands of Syrians, have been busted for staging videos and spreading fake images on numerous occasions.

Russian media, for instance, released an interview with Omran’s father, which revealed that the group had manipulated the boy into being photographed instead of offering instant help and later threatened the father after he went into hiding to prevent any unwanted media exposure.

In the wake of the US announcement that it was halting its funding of the NGO, UK Prime Minister, Theresa May, said that London, in turn, might increase its support for the group. A freedom of information request has revealed that since 2011, the United Kingdom has allocated $3.62 billion (2.71 billion pounds) to the Syrian humanitarian effort, $51.3 million (38.4 million pounds) of which was provided via the conflict, stability and security fund to the White Helmets.