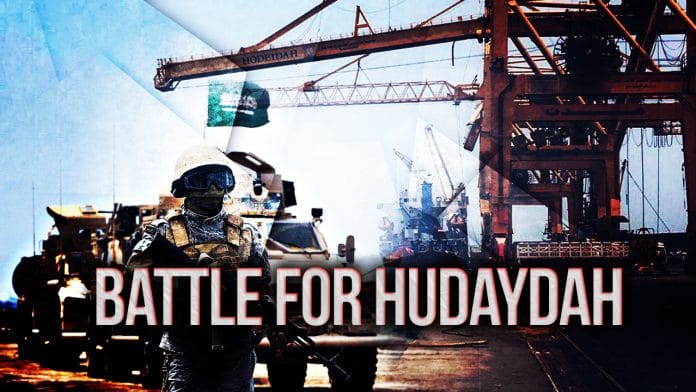 On January 13, the Saudi-led coalition launched a new operation to capture the Yemeni port city of Hudaydah from the Houthis.

“Liberation of the port is the beginning of the fall of the Houthi militias. It will secure navigation in the Bab al-Mandab Strait and cut off the hands of Iran,” the Saudi-backed government of Abd Rabbuh Mansour Hadi said in a statement.

The ground operation is reportedly supported by the air and naval forces of the Saudi-led coalition. Pro-Saudi and pro-UAE sources claim that the attack is ongoing from multiple directions. However, according to local sources, the advance is mainly taking place south of Hudaydah, near the airport.

On the same day, the Yemeni Navy [loyal to the Houthis] announced that it had targeted a vessel of the Saudi-led coalition off the coast of Hudaydah with two anti-ship missiles. According to the Navy, the vessel was one of the many participating in the attack on the city. The vessels attempted to carry out a landing operation in the framework of the advance on Hudayadh, but were forced to retreat after the strike.

Over the past months, the coalition’s forces have made multiple attempts to reach and capture Hudaydah. However, they have not been able to achieve this goal.

Pro-coalition sources also claim that the Houthis use the port to smuggle weapons from Iran. The city also hosts at least one of the facilities used by the Houthis to make water-born improvised explosive devices to attack the coalition’s vessels.

At the same time, Hudaydah is the last remaining humanitarian lifeline in the Houthis-controlled part of the war-torn country.