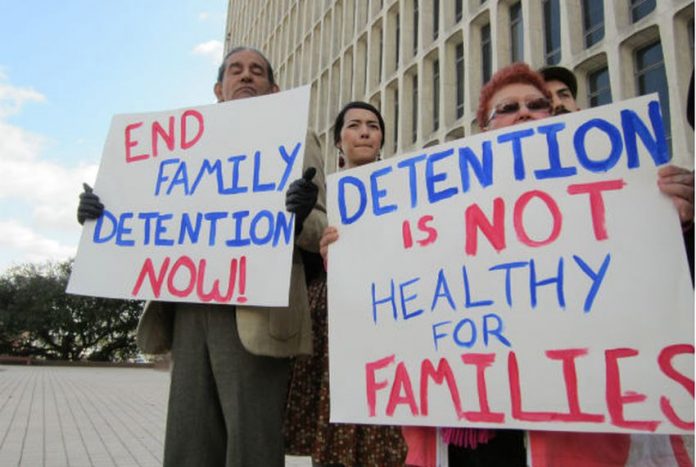 Thousands protest across US against family separations

[ Editor’s Note: This illegal immigration new Fake News con was expected, as the laziness of its proponents has it defaulting to the age old “playing the victim” routine. The claim of victimhood at the hands of the US is nothing more than a slander on the American people.

For all those with analysis part of their brains turned off, when people are arrested for illegal acts and not bailed out, they are separated from their children.

I am not aware of any past group of arrested people posing this “family separation” defense as grounds for why they should not be held. This is solely a creation of illegal immigration supremcacists.

And I do not use the term to be cruel, but because it accurately describes what their attitude is, that they are “above” having US immigration law applied to them. It’s the attitude you would get from Israelis a lot of the time, “Your rules don’t apply to me, because…you know…I’m ____”. Many find this attitude offensive, like me.

But the con actually has layers to it. First is the presentation that these people are impoverished. An intelligence analyst would ask, “Then how were you able to travel from your home country and pay all the bribes and associated smuggling costs in getting to the US border, when really impoverished people could  only dream of doing such a thing?”

It has already been published that the children of those arrested are released to the family members of those who have relatives here, which is most of them.

They are treated just like a US citizen who gets arrested with children. It is not the government separating the children, in is the parent committing the illegal act that is separating themselves.

And yes, they know damn well that the children are going to be picked up by relatives as that is what has been going on for some time, with no media fuss. The kids end up in school quickly, free lunches, and living better than at home.

But they present this as some kind of crime that the US has imposed upon them, a flagrant guilt tripping con, which is long a staple from the liberal quiver of PR warfare, always play the victim even when you are the aggressor.

We will never know how many of these people, these women, have died, been murdered, and what horrors have befallen their children. Anyone making this trip is putting their children at great risk when they could apply for entry at their respective US embassy, with family sponsorship in the US.

Legal immigrants have used this process for decades, but for the immigration supremacists, they say no. Their attitude is, “We reject your rules and prefer to ‘jump the line’ to get ahead of those seeking legal immigration.

And if you don’t allow us we will charge you with cruel treatment, and even worse, child abuse, even when it was we who put our minor children at risk by attempting the dangerous illegal entry.”

This attitude has a strong whiff of illegal immigration supremacism to me, which makes  me…heaven forbid, anti-illegal immigration. And yes, if I wanted to help improve the lives of struggling families and children, I would not have to leave the borders of the US to spend myself into oblivion doing it, or even my own state.

Does that make me a meanie? No, just someone that does not like being conned. I actually get really tired of it… Jim W. Dean ]

Thousands of people joined rallies across the United States to protest President Donald Trump’s policy of separating children from their parents who have entered the country illegally at the US-Mexico border.

Rallies and marches took place Thursday in more than a dozen states, including California, Texas, New York and Michigan, to draw attention to what organizers described in a statement as the Trump administration’s “cruel and inhumane treatment of immigrants and asylum seekers.”

About 60 cities and towns across the US were expected to participate, said Anna Tarkov, communications director for Families Belong Together, a group opposed to the family separations.

The group also hosted a virtual event where supporters could sign petitions, get in contact with elected officials and donate to organizations that work to protect children separated from their families.

Several hundred protesters in Los Angeles, California, gathered to voice outrage at what they see as the latest affront to American values by the Trump administration, drawing on an American history of cruelty, from the conquest of the Indians to the slave trade to the internment of Japanese-Americans during World War II.

“Taking kids from their parents is crossing a line,” said Gale Chernich, who joined the protest in Los Angeles, where many of the organizers were immigrants themselves, some of them undocumented.

Dozens of activists also took part in a rally in Rutherford, New Jersey, where the Reverend Ron Verblaauw, pastor of Rutherford Congregational Church, told NBC New York: “Separating children from families is the first sign we are not the land of the free and the home of the brave anymore. We are the scared.”

The National Domestic Workers Alliance, an advocacy group, was one of several dozen organizations co-sponsoring the rallies.

“The outrage and opposition will only keep growing if the administration continues this cruelty of separating families,” Jess Morales Rocketto, political director of the alliance, said in a statement.

It’s the second wave of major protests against family separations across the US. Activists rallied on June 1 and filed a complaint with the Inter-American Commission on Human Rights, an agency of the Organization of American States, alleging that the US policy violates human rights.

The number of family separations has risen sharply in recent weeks, largely because of new policies by the Trump administration.

US Attorney General Jeff Sessions announced in May a “zero tolerance” policy in which all those apprehended entering the United States illegally would be criminally charged, which generally leads to children being separated from their parents.