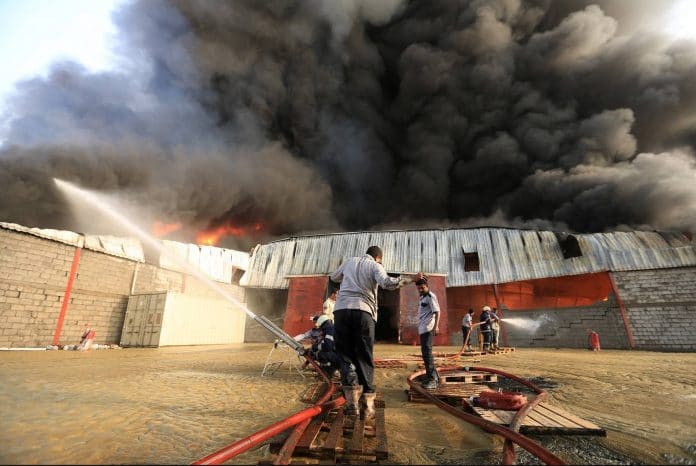 Sondoss Al Asaad is a Lebanese freelance journalist, political analyst and translator; based in Beirut, Lebanon. Al Asaad writes on issues of the Arabs and Muslims world, with special focus on the Yemeni war and the Bahraini uprising.

The aggressive Saudi-led coalition continues its aerial and ground campaign in Yemen, which has been launched since March 2015, with an immense military assistance from various Western governments. The imposed hostile war has taken a terrible toll on the civilian population, as the Saudi-led coalition has conducted scores of indiscriminate and disproportionate airstrikes.

These attacks have hit civilian facilities with munitions supplied by the United States, United Kingdom and other governments, in violation of the laws of war.

On 9 June, the United Arab Emirates, which leads the coalition’s operations along the Yemeni western coast, informed the humanitarian organisations that they had three days to evacuate the Red Sea port city of Hodeida. In fact, about 70 percent of Yemen’s aid and commercial imports enter through Hodeida and the nearby Saleef port, providing food, fuel, and medicines needed to prevent famine and cholera epidemic.

For more than 3 years, the coalition has killed nearly 10,000 and pushed the impoverished, ravaged Yemen to the brink of starvation; and now Hodeida, which is home to 600,000 civilians, is under the mercy of the new assault.

Actually, Hodeida’s strategic location has given it great significance, as it is located 140km west of the capital Sanaa. To the north, is the Ras Isa oil terminal, which served the Marib oilfields and was the main export terminal and the nearby port of Saleef. To the east, is the fertile Tihama plain, which is the most important agricultural region in Yemen. To the west, the Red Sea and major international shipping lanes, which are used to trade goods between Europe, Asia and Africa through the Suez Canal.

The devastating war raging in Yemen is on the verge of entering an atrocious vicious stage.

Yemen has been imposed to this assault merely because its anti-despotism people want to defend their sovereignty, religious freedom, and more essentially political self-determination. Indeed, the Yemeni resistance, namely the Ansarullah movement, are ready to sacrifice whatever to defeat the overarching US-Israeli conspiracy and its Saudi puppets.

Since the beginning of the hostile military campaign in March 2015, the coalition has committed copious criminal airstrikes and used inherently indiscriminate cluster munitions, which maximises the civilian casualties and damages the civilian structures.

The Trump administration views the fight in Yemen as a key strategic battle in its effort ‘to combat Iran’s expanding influence across the Middle East.’ Obviously, the US is an effective party in the conflict soon after fighting began by providing intelligence and refueling for coalition bombing missions.

It sells advanced bombs and rockets to the coalition and, undoubtedly, it is complicit in violations of the laws of war during the now Hodeida offensive. Besides, the US sent Special Forces, in January 2017, to assist in locating and destroying Houthi caches of ballistic missiles and launch sites, according to the New York Times.

Additionally, France backs the coalition, according to a recent Le Figaro’s report, which asserts that French Special Forces are on the ground in Hodeida. However, the French Defence Ministry stressed that is not part of the Saudi offensive.

He also pointed out that France is studying the possibility of carrying out a minesweeping operation once the coalition wraps up their military operations.

Mohammed Abdul-Salam, Houthi spokesperson, conversely said that the British and French warships are on standby on the western coast of Yemen to launch missile and aerial attacks. He hailed the Houthis’ resistance against the Western-sponsored aggressors, emphasising that the Hodeida assault is an American-British operation as Saudi Arabia and the UAE are not alone capable of launching such an operation.

The Hodeida assault will badly affect supplies of food, fuel and medicines, triggering the critical humanitarian crisis for more than three-quarters of the population.

It will also lead to the increase of basic commodities’ price and thus accelerate food insecurity. Frequently, the coalition warplanes have bombed the port; and as a result, the Houthis launch ballistic missiles towards the Saudi lands. Further, it tightens its blockade of Yemen, allegedly ‘to halt the smuggling of weapons to the rebels by Iran,’ a false accusation that Iran has frequently denied. The United Nations has warned that the assault could leave up to 250,000 people dead.