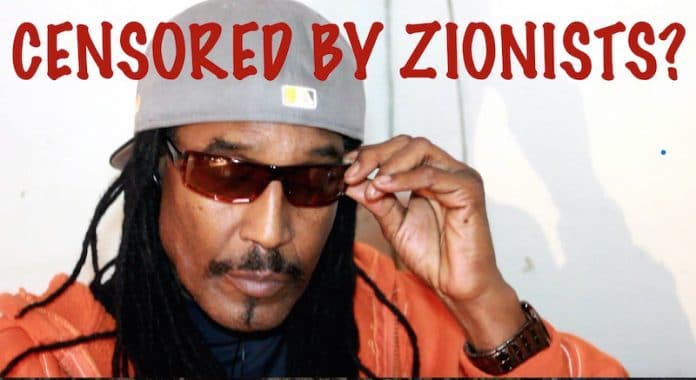 The global academic community is getting less and less free—and the freedom-crushing culprits are usually Zionists. I was driven from the American academy by neocon Zionists covering for the traitors who murdered almost 3,000 people on 9/11/2001. Since then, a long list of professors including Norman Finkelstein, Anthony Hall, Stephen Salaita, Joy Karega, and countless others have been hounded by the same global special interest group. It’s gotten to the point that you can’t even organize a speaking event on campus unless the speaker has a history of kissing up to Zionists.

Since when did the genocidal settler colony posing as the illegitimate so-called state of Israel get the right to control the global academy? Maybe it’s time for the academy to apply “super BDS” and immediately eject all Zionists and Zionist sympathizers, cut off all relations with not only “Israel” but all Zionists everywhere, and take back the intellectual freedom that is its whole raison d’être.

Open Letter to the University of Vienna, Institute for African Studies

Another lecture is scheduled for the 21st of June. It will be given by former Black Panther member Dhoruba bin Wahad, who will reflect upon the Black Panther struggle and his 19 years of imprisonment in the US.

The attempt to prevent both lectures is based on the argument that the Association Dar al Janub supports the Palestinian-led international Boycott, Divestment, Sanctions movement for the freedom, justice and equality for the Palestinian people. Therefore—according to the argument—the association should not be allowed to hold events at the University of Vienna or even just engage in cooperation with various departments or academic staff.

We strongly believe that such efforts violate academic freedom and the right to free speech at the University of Vienna.

The invitation of Greg Thomas and Dhoruba bin Wahad aims to open up the academic space to engage with Black Civil Rights activists, their community struggles for justice and equality and their histories. These histories are entangled with transnational solidarity campaigns which include the BDS movement, as Angela Davis reminded us in her talk at the University of Vienna on the occasion of its 650th anniversary in 2015.

As much as we respect and support the democratic value of student unions to actively participate in debates about University politics and events planned on campus, we are deeply concerned about the attempt to prevent the upcoming lecture by Dhoruba bin Wahad and to exercise pressure on the Institute of African Studies to withdraw from cooperation with Dar al Janub.

We urge the University of Vienna and the board of the Institute of African Studies to support open discussions and the upcoming event.

First of all I have to apologize for writing you again, using your e-mail-address (but only in BCC), I promise that this will not become a sort of newsletter or spam, but it is an emergency.

Secondly, I have to thank you very very much for your overwhelming support and solidarity in the last weeks. It first made the impression that your great support by signing the open letter would lead for the first time to a change in thinking amoung the board of the University of Vienna to support an open debate and to defend the academic freedom.

Please keep in mind that the same University (but another department) invited the Israeli justice minister Ayelet Shaked one and a half year ago to speak about human rights and war on terror (despite of a letter of protest, signed by many well-known academics such as G. C. Spivak and Judith Butler, see https://openlettervienna.wordpress.com/). In that time the University of Vienna pointed out in a statement that the freedom of speech and the academic freedom and debate would justify to hold a lecture by this official representativ of Israels right-wing extremists.

Today we have learned that the “Israelitische Kultusgemeinde” (comparable with the Central Council of Jews in Germany) accusing and slandering not only our Association, not only BDS, but now even the Black Panther Party and Dhoruba bin Wahad of Antisemitism. The Israelische Kultusgemeinde, who manly supports in their statements the official Israeli government and silences even the critical voices of their own community, summons tomorrow the deanship to a confidantial meeting. We assume that in that meeting the deanship will get intimidated to ban the lecture by Dhoruba bin Wahad at the University, schedulded for Thursday.

In our view it’s the first time that these pressure groups not only slander and banish open discussions about Palestine/Israel (let alone about BDS) but now even slander and banish a discussion about Black radical resistance in the US and about the history of the Black Power movement. So the Central Council tells the rectorate in a confidantial assertion that “Dhoruba al-Mujahid bin Wahad was leader of the Black Panther Party and co-founder of the Black Liberation Army, and this BLA would have been a criminal organization that carried out bombings, killings of police officers and drug dealers and would have been responsible for robberies.There would be valid reasons to assume that the speaker could (!) make anti-Semitic remarks at the event on Thursday.” They also say Dhoruba makes an assertion that “Zionist seek to influence the public opinion” (as a proof for anti-semitic quotes of Dhoruba)

Please feel free to send this call to everyone who is interested and solidary. If you need any further informations about our Association, about Dhoruba bin Wahad or BDS Austria (the local campaign group in Austria we support), don’t hesitate to write me. Since the slanders increasingly fierce I can imagine doubts can be sowed (that’s probably the goal of slander). The slanderers do not flinch from setting up a construct of lies saying we would be the foreign organization of Hamas, PFLP and we would not be surprised if the next accusation would be that we are aliens from outer space.