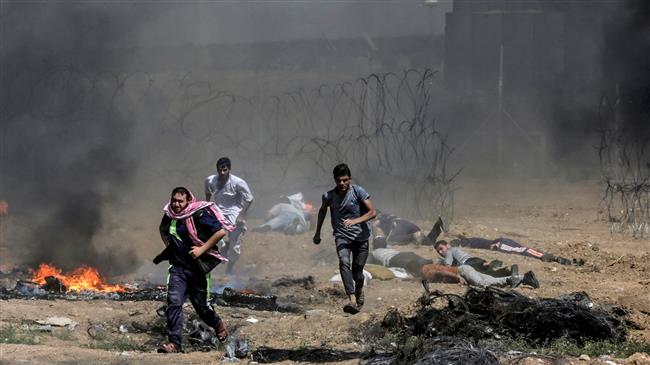 UN chief to release report on Gaza after US obstructionism

[ Editor’s Note: This UN move is better late than never. And as I know, many will say this will not change anything; I will still remind everyone that some resistance is less hopeless than no resistance.

As I have editorialized here many times, a divided and struggling public all over the world needs flag-bearers to rally around, so it doesn’t feel like David taking on Goliath.

With Israel, due to the lack of resistance in the US, we now have this horrible situation where flagrantly unconstitutional state laws are being passed in legislatures making it illegal to boycott Israel. Organized resistance is nowhere to be seen.

If VT were a funded think tank structure, we would be making this a main cause, because more of these illegal laws will certainly follow this one. The drafts will be submitted by the Zionist lobby wanting to castrate any potential opposition, where those attempting opposition are not resisted by Israel, but by the taxpayer-funded US government. You just can’t make this stuff up.

Zionist intelligence agency penetration of our political system is now going mainstream. All I can figure about this overt “coming out” is that they are quite comfortable that the current Supreme Court will not strike it down; but I still have my fingers crossed that it will.

What we are seeing is a natural progression on the theme that all opposition to anything Zionist or Israeli is being framed as an act of hate, to bring “anti-hate” statutes to bear.

That said, any Supreme Court challenge has to be led by somebody, but the cupboard seems to be bare with even the Democrats ducking it as a midterm elections issue, which I think is a big mistake… Jim W. Dean ]

The document, which has yet to be made public, also warns that Gaza is on the brink of another war with Israel, according to Israel’s Channel 10 news, which obtained a copy of Guterres’s report.

The document was mandated by UN Security Council Resolution 2334, passed in December 2016, which focused mainly on calling for an immediate halt to all Israeli settlement construction in the West Bank and East Jerusalem al-Quds.

Guterres’s document, however, deals mainly with concerns over Gaza, especially the Israeli killing of protesters along the fence between the coastal sliver of land and the occupied territories.

At least 131 Palestinians have been killed and 13,900 others wounded by Israeli forces since March 30, when the regime ordered a crackdown on weekly Gaza rallies promoting Palestinians’ right to return to their homeland.

“Israel has a responsibility to exercise maximum restraint in the use of live fire, and to not use lethal force, except as a last resort against imminent threat of death or serious injury,” the document read.

“The killing of children, as well as of clearly identified journalists and medical staffers by security forces during a demonstration are particularly unacceptable,” the document added.

Guterres’s document also censures Israeli attempts to justify the killing of civilians and describing all demonstrators as Hamas members, as claimed by the regime’s foreign minister Avigdor Lieberman.

“Israeli officials also made provocative and inflammatory statements. In a radio interview, a senior Israeli minister …falsely asserted that all Palestinians are affiliated with Hamas, and thus by extension legitimate targets,” it said.

This “signaled a permissive Israeli policy towards the use of live fire against protesters and contributed to the tragedy we have witnessed over the past 11 weeks,” the report added.

The UN General Assembly adopted a resolution condemning Israel for Palestinian civilian deaths in the besieged Gaza Strip on June 13. An amendment presented by Washington slamming Hamas for “inciting violence” in Gaza failed to gain the two-thirds majority it required.

According to the Israeli news report, Guterres’ document was circulated to the 15 members of the Security Council after France pressed the secretary general to release his conclusions, after US Ambassador to the UN Nikki Haley fought to delay it for 17 months.

It is not clear when the report, which will be updated every few months, will be released.

UN spokesman Stephane Dujaric confirmed to the Times of Israel that Guterres’ report as requested by resolution 2334 is due to be presented to the Security Council this week.

Guterres also expressed concern about the economic crisis in the Gaza Strip, which suffers from a lack of electricity, drinkable water and food, criticizing Palestinian Authority President Mahmoud Abbas for cutting off salaries in the besieged enclave.

The West Bank-based Fatah party headed by Abbas and the Gaza-based Hamas have been at odds ever since the latter scored a landslide victory in Palestinian parliamentary elections in 2006.

In October 2017, Hamas and Fatah inked a reconciliation deal in Cairo to put an end to their decade-long rivalry, but tensions between the two factions continued to rise.