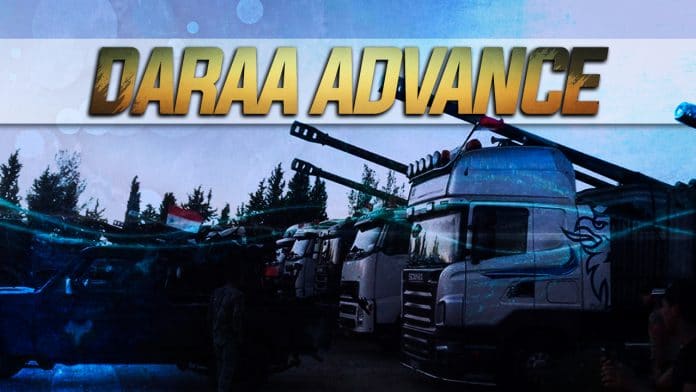 On June 19, units of government forces attacked positions of militant groups near the village of Buser al-Harir northeast of the southern Syrian city of Daraa. Sporadic clashes in the area continued on June 20 but no major advance was carried out by the Syrian Arab Army (SAA) and its allies.

Pro-government sources described this development as a trial balloon ahead of possible advance in the area.

If the SAA establishes control of Duweiri al-Harran and Melihit al-Atash, it will encircle a number of militant held villages south of these two points creating a “cauldron”, which would be cut off from the rest of the militant-held area.

Meanwhile, military equipment, including artillery and battle tanks, of the Syrian military continued to enter the province of Daraa.

An Israeli reconnaissance unmanned aerial vehicle, Skylark, crashed in the province of Quneitra, east of the occupied Golan Heights, on June 19. The Israeli military has likely expanded its reconnaissance operations in the area ahead of the SAA’s expected advance in southern Syria.

On the same day, Russian Presidential Envoy for Syria Alexander Lavrentyev said that there are still notable number of ISIS and Hayat Tahrir al-Sham (Jabhat al-Nusra) militants in southern Syria. The announcement, which came following a meeting among representatives of Turkey, Iran and Russia on the de-escalation zones agreement, is another indication that the Russian-Iranian-Syrian block is not going to tolerate the presence of these groups in the war-torn country.

Units of the SAA and other pro-government factions have cleared the areas of Tayyara, al-Bawdah, Wadi al-Luwayziyah and nearby points at the border with Iraq from ISIS cells. This advance was a part of the wider effort to combat the terrorist group’s presence in the area.

The SAA also met with the Iraqi Popular Mobilization Units (PMU) at the Syrian-Iraqi border, southeast of the village of Humaimah.

Following the June 18 strike by the US-Israeli-led bloc on pro-Damascus forces southeast of al-Bukamal, the PMU announced that it is set to secure the border area despite the opposition from any side. So, the PMU’s presence on the border will only grow.

In eastern al-Suwayda, the SAA liberated Khirbat Al-Umbashi and advanced on the settlement of Al-Qara where clashes between government troops and ISIS members are now ongoing.