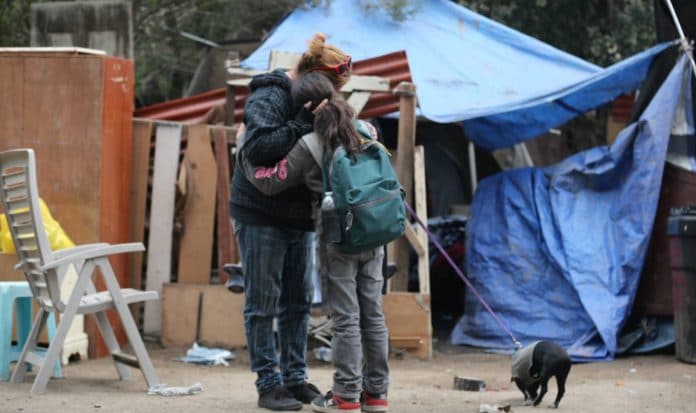 Trump didn’t do it, it came from Reagan and the mob that brought us Iran contra, flooded America with illegal aliens and began the deindustrialization of the US.

An industrial America with trade unions and informed politics would be a danger to the “elites and oligarchs” that Reagan cherished. In reality, Trump has done little to make a hopeless situation worse, not yet. His plans to cut veterans benefits, gut social security and medicare and turn the country over to video poker scamsters and payday lenders is in its early stages.

To this extent, he is only following what the GOP has always done, suppress votes, prey on the ignorant and point fingers at others, “the liberals,” for what they do.

The United States is a land of stark contrasts. It is one of the world’s wealthiest societies, a global leader in many areas, and a land of unsurpassed technological and other forms of innovation. Its corporations are global trend setters, its civil society is vibrant and sophisticated and its higher education system leads the world. But its immense wealth and expertise stand in shocking contrast with the conditions in which vast numbers of its citizens live. About 40 million live in poverty, 18.5 million in extreme poverty, and 5.3 million live in Third World conditions of absolute poverty.

It has the highest youth poverty rate in the Organization for Economic Cooperation and Development (OECD), and the highest infant mortality rates among comparable OECD States. Its citizens live shorter and sicker lives compared to those living in all other rich democracies, eradicable tropical diseases are increasingly prevalent, and it has the world’s highest incarceration rate, one of the lowest levels of voter registrations in among OECD countries and the highest obesity levels in the developed world.

The United States has the highest rate of income inequality among Western countries.

The $1.5 trillion in tax cuts in December 2017 overwhelmingly benefited the wealthy and worsened inequality. The consequences of neglecting poverty and promoting inequality are clear. The United States has one of the highest poverty and inequality levels among the OECD countries, and the Stanford Center on Inequality and Poverty ranks it 18th out of 21 wealthy countries in terms of labour markets, poverty rates, safety nets, wealth inequality and economic mobility. But in 2018 the United States had over 25 percent of the world’s 2,208 billionaires.

There is thus a dramatic contrast between the immense wealth of the few and the squalor and deprivation in which vast numbers of Americans exist. For almost five decades the overall policy response has been neglectful at best, but the policies pursued over the past year seem deliberately designed to remove basic protections from the poorest, punish those who are not in employment and make even basic health care into a privilege to be earned rather than a right of citizenship.6. The visit of the Special Rapporteur coincided with the dramatic change of direction in relevant United States policies.

The new policies: (a) provide unprecedentedly high tax breaks and financial windfalls to the very wealthy and the largest corporations; (b) pay for these partly by reducing welfare benefits for the poor; (c) undertake a radical programme of financial, environmental, health and safety deregulation that eliminates protections mainly benefiting the middle classes and the poor; (d) seek to add over 20 million poor and middle class persons to the ranks of those without health insurance; (e) restrict eligibility for many welfare benefits while increasing the obstacles required to be overcome by those eligible; (f) dramatically increase spending on defence, while rejecting requested improvements in key veterans benefits; (g) do not provide adequate additional funding to address an opioid crisis that is decimating parts of the country; and (h) make no effort to tackle the structural racism that keeps a large percentage of non-Whites in poverty and fear.

In a 2017 report, the International Monetary Fund (IMF) captured the situation even beforethe impact of these aggressively regressive redistributive policies had been felt, stating that the United States economy is delivering better living standards for only the few and that household incomes are stagnating for a large share of the population, job opportunities are deteriorating, prospects for upward mobility are waning, and economic gains are increasingly accruing to those that are already “wealthy”.

The tax reform will worsen this situation and ensure that the United States remains the most unequal society in the developed world. The planned dramatic cuts in welfare will essentially shred crucial dimensions of a safety net that is already full of holes. Since economic and political power reinforce one another, the political system will be even more vulnerable to capture by wealthy elites.9 This situation bodes ill not only for the poor and middle class in America, but for society as a whole, with high poverty levels creating disparities in the education system, hampering human capital formation and eating into future productivity.

UN Poverty in US Report by Stephen Loiaconi on Scribd

The poverty is very real in America, a permanent underclass of $8 dollar an hour wage earners, 13 million convicted felons and 30 million terrified illegals.

Preying on them is every conceivable scam known to man, industry after industry beginning with health care engaged in systematic warfare against the public.

Worse still, generations of Americans have never learned to work. The blame there can go many places but, were one to look at the typical corporate business plan, the idea is to deliver shoddy goods and services to a confused and controlled public, subjected to something quite beyond mind control, doing so based on offshore slave labor, illegal aliens here in the US where they can be hidden away and then the nearly unpaid labor of America’s underclass.

Go to the supermarket. Chose a line. Will you pick the Asian cashier or the “American?” Take a few moments and watch.

Americans gave up a long time ago, recognizing that employment is always dead end. A college education that can leave a student in $100,000 of high interest lifetime debt, debt meant to follow to the grave, can in too many cases be the only way to cross the $10 per hour wage scale into 3rd class poverty from utter poverty.

In Switzerland, workers at McDonalds make $22 per hour. It isn’t cheap eating there but lines go out the door. Then again, those workers buy things actually made in Switzerland.

When Trump brought in illegal Polish workers to build Trump Tower, he recognized something Europeans knew all along. Americans, not so many anyway, don’t like work. Americans are raised to consider physical labor demeaning. Poles work as do Hungarians, the founders of the steel companies, even Henry Ford, knew this and flooded America with immigrants brought in for their factories over 130 years ago.

The remains of their crumbling neighborhoods can still be seen in most American cities.

The heart of it. to an extent, is the concept that stockholder return has to be predicated on offshore labor, shoddy goods, high prices with wide profit margins and suppressed wages.

This is Walmart, Home Depot, Meijers, even Aldi.

The sad part is when there is economic growth, there aren’t any workers left. A worker has to have a car, some place to live, and has to have his or her health. To do this would have required the $22 hour wage we saw in Switzerland.

Here in West Michigan we have 100% employment and a shortage of labor. Nearly all low wage occupations are given to Hispanics but their expectations, after generations in the US, have moved on. They are the new business owners and middle class.

High cost of living has kept “poor working whites” away, which leaves the factories that pay $9 per hour grinding to a halt. They raise wages to $10 or even $12, and then go to temp agencies and recruiters, but there is no way to survive here without some place to live and money for food.

The answer would be the cardboard box communities in Mexico that build our Ford F150 pickup trucks, our Whirlpool refrigerators and so many other products under the Bush/Salinas NAFTA treaty. Workers can live in the parking lot, defecate in a ditch and collect sticks to cook beans and rice, while waiting for their next shift to begin.

If they speak up, the national police will simply gun them down.

The other drain in Canada, cheap money, heavy government subsides, housing, food, health care, all financed by tariffs but more than that, a nation with no military budget, no aircraft carriers, no nuclear missiles and built on 4 million Chinese business owners invited in with their cash, just like Kushner does.

Trump didn’t do it, greed did it.