Aleppo and Mosul, cities that endured some of the worst urban warfare in the 21st century, have quite different liberation stories, but they are alike in the way media treated them with oblivion once the post-war struggle began.

Both the Syrian city of Aleppo and Iraq’s Mosul found themselves gripped in fierce battles in late 2016. Syrian forces were trying to liberate the eastern part of Aleppo from militant groups to end the mortar shelling, which was killing civilians in the western half, and to begin rebuilding the war-ravaged districts of the city. An ambitious Russia-backed effort to evacuate civilians from the warzone set up humanitarian corridors. It was the US-backed Iraqi battle for Mosul, however, that captured the Western media’s favor as a heroic struggle to liberate civilians from Islamic State (IS, ISIS/ISIL), while the war in Aleppo was presented in a markedly different light.

It’s no secret that the mainstream media coverage of eastern Aleppo’s liberation – more often termed as the “siege” or the “fall of Aleppo” in the West – focused exclusively on alleged atrocities of the Syrian Army rather than the full picture. Reports tugged at the emotional strings of the viewers, describing children’s hospitals, schools and blood banks destroyed in the government bombing. However, they failed to mention that the former schools and hospitals often housed militant mortars, while the “last hospital in Aleppo” was destroyed multiple times as MSM readily cited militant-linked sources without verifying them.

But perhaps the most absurd of the stories spun by the media during the battle was the “bombing” of the cat sanctuary in the city. The home for orphaned felines, which was run by Mohammad Alaa Aljaleel, who was referred to as an “ambulance driver” and “the Catman of Aleppo,” was repeatedly brought into the spotlight, highlighting the hardships of the rebel-held parts of the city. In November 2016, the Catman reported that the facility was “bombed,” and several cats and a dog, aptly named Hope, were killed. The incident was squarely pinned on President Bashar Assad’s air forces and Russia. The next alleged attack on the sanctuary came with the MSM’s weapon of choice – chlorine – according to the owner, who was eventually safely evacuated from Aleppo.

home of Ernesto cats, will close !! now also they bombarded with chlorine. We go away with our cats and Dog .😔#HouseOfCatsErnestoinAleppopic.twitter.com/5cZ0pfh3CB

The man eventually settled in the militant-held western countryside of Aleppo, opening a new kitten sanctuary. The feline facility, sadly, has not received much media attention ever since. As the battle for Aleppo ended, the media largely lost its interest in the city, forgetting about the civilians who are now working hard to rebuild a peaceful life.

The chaotic battle for Mosul, where IS terrorists ruthlessly used civilians as human shields amid relentless US-led coalition bombing, was no less of a tragic story of suffering, but the absence of evacuations for civilians made the city warfare particularly extreme. When it came to coverage, however, the MSM mostly picked military advances while the toll of the fighting was covered in a hushed and infrequent manner.

While footage and photos of the city, taken by a few real reporters on the ground, showed the vast destruction and carnage, no widespread outrage was to be seen in the aftermath of mass civilian casualties reported. Warnings from international human rights groups, including the UN bodies, which highlighted the dire refugee situation and apparent disregard for “collateral damage” by the coalition, were also left largely unaired.

But as the battle ended and the city was pronounced liberated from IS, the story of Mosul’s struggles was seemingly cut short in the media once and for all.

But what happened next?

The battle for Aleppo ended in the very end of 2016, and the city has been vigorously striving to get back to peaceful life ever since. The cafés have reopened, the World Cup is broadcasted, and people are celebrating holidays – of several different religions – in peace.

Syrian football fans are watching the 2018 FIFA World Cup. During the match in the sports bars there is no free one. Most support the Russian team.#Syria#Aleppo#Rusia2018#FifaWorldCup18#FifaWorldCup2018#SoccerAid#Syrian#FIFA#SportWithoutPolitics#2018FIFAWorldCuppic.twitter.com/xDWj0Vtk9i

The Old City’s Sheraton Hotel, which was turned into a Syrian Army barracks during the battle, was restored to its former glory and is open for guests.

The city is rebuilding, roads have been long cleared of rubble, and they are getting new asphalt.

Restoration work has started on the Old Markets in #Aleppo#Syriapic.twitter.com/xz5zzq82qa

Now why is it that Syria’s Aleppo is of no mainstream media interest when it is rising again with its citizens cleaning and rebuilding their city after the defeat of ISIS and Al-Qaeda jihadists? 🤔
(Photos via @NamanTarcha) pic.twitter.com/O1csFbe90f

Mosul, which was liberated nearly a year ago, presents a more chilling picture. The authorities still haven’t managed to collect the dead – militants, civilians and those who fought against IS.

Last week, Mosul was visited by Hollywood superstar and Special Envoy of the High Commissioner for Refugees (UNHCR) Angelina Jolie, who found the “worst devastation” there that she has seen in her 17 years representing the UN watchdog. The streets of Mosul’s Old City are still laying in ruins, and the stench of decomposing corpses is still in the air.

READ MORE: ‘You can smell the bodies’: Angelina Jolie in Mosul one year after ‘liberation’ by US-led coalition

“There are bodies in this rubble that stay here and you can smell the bodies and some of them have family members that are here and they are unable to move them,” Jolie said, walking the streets where the “liberators” made the last push against IS terrorists. 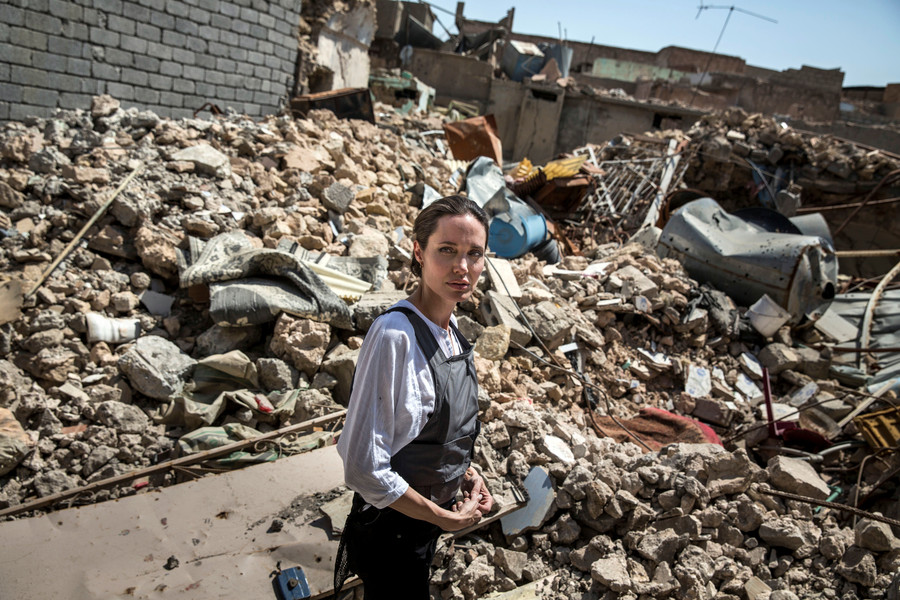 Surely, life is picking up in Mosul, yet at a very slow pace, with destruction seen in the background of every photo. 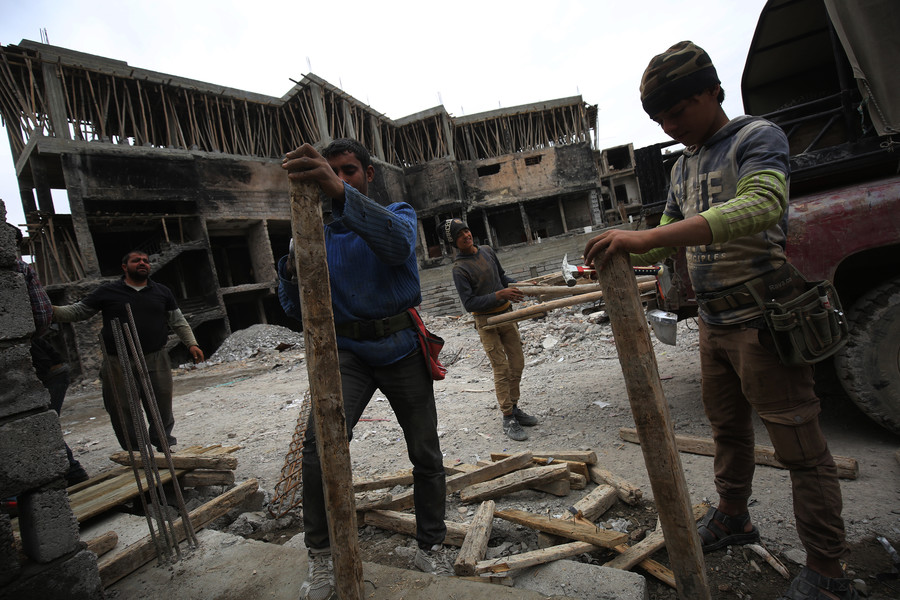 Historical sites in both cities sustained massive damage during the fighting. An iconic landmark of Mosul, the Grand al-Nuri Mosque, was blown up by IS militants a month before the city was recaptured by the coalition. The monument was effectively reduced to rubble, and, nearly a year after, it remains in the same state – showing only signs of further deterioration and weathering.

The destroyed Grand al-Nuri Mosque is seen in the Old City of Mosul on January 17, 2018. © Ari Jalal / Reuters

Aleppo Citadel, on the other hand, not only endured the battle for the city, but it actually played one of the key roles in it, serving as a stronghold for Syria’s defenders once again. While the monument was damaged during the fighting, restoration – and demining – works were launched almost immediately after the city’s liberation. Now it’s open for everyone again.

You won’t be seeing these smiling faces on any mainstream media outlets because it doesn’t advance their agenda against Syria. pic.twitter.com/X3nrDoH0TH

#Aleppo Citadel is back open for Syrian and Foreign Tourists. Fee to enter in US $ equivalent?

Another iconic landmark of the city – the Umayyad Great Mosque – was less lucky and sustained way more serious damage, getting pierced with shrapnel and having one of its minarets toppled. While more work needs to be done, it looks way better now – and it actually serves its purpose.