Home WarZone US tells rebels not to count on its help as Syrian army...
Share
Twitter
Pinterest
WhatsApp
Linkedin
ReddIt
Email
Print
Tumblr
Digg
The US military has reportedly warned the rebels it backs in Syria that it will not help them thwart a large-scale offensive of the Syrian Army, which is rapidly gaining ground in the southwest of the country.

In a letter to the commanders of the Free Syrian Army (FSA), a loose umbrella group of armed rebels, Washington wrote that they should not base their decisions “on the assumption or expectation of a military intervention by us.”

The message, which was reported by Reuters on Sunday, calls on the group to decide for themselves on their response to the rapidly-advancing Syrian forces that continue their assault eyeing to reclaim the swathes of land along the border with Jordan and the Israeli-occupied Golan Heights. 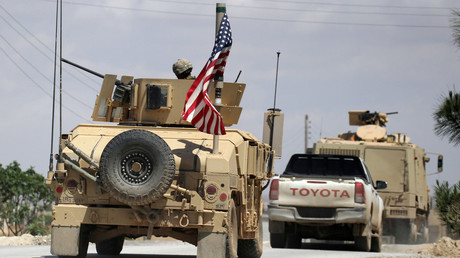 “We in the United States government understand the difficult conditions you are facing and still advise the Russians and the Syrian regime not to undertake a military measure that violates the zone,” the message states.

There have been mounting concerns that the new push by the Syrian army might drag the US troops, especially those deployed in Al-Tanf military base along the Jordanian border, into the showdown with the Syrian forces.

Tensions have flared up amid reports by Syrian state media about the spike in the US-led coalition attacks on its military. At least eight people were killed in the alleged strike by the coalition in Deir ez-Zor on Thursday, the same day the US military claimed that its Al-Tanf base was targeted by unknown hostile forces.

The message comes after Washington accused Damascus of “unambiguously violating” the ceasefire agreed between Russia, the US and Jordan last July.

The deal paved the way for the establishment of a de-escalation zone in Syria’s southwest, where rebels and the Syrian government forces are barred from fighting each other. The truce was ultimately aimed at separating ‘moderate’ opposition from terrorists, as terrorist groups were excluded from the agreement.

“The Syrian regime’s violations of the ceasefire in southwest Syria need to stop,” Ambassador Nikki Haley said at a UN meeting on Friday. On Thursday, State Department spokeswoman Heather Nauert warned the Syrian government of “serious repercussions,” without elaborating. 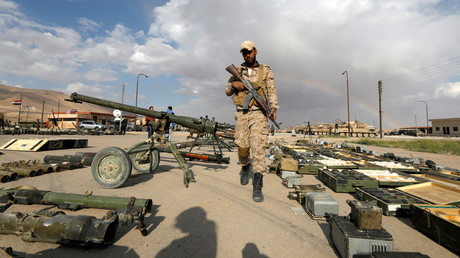 US arms ended up with Al-Nusra jihadists in Syria, says weapons dealmaker

Some 2,000 US troops have been stationed in Syria, some of them are embedded with Syrian Democratic Forces (SDF) and the others are in Al-Tanf. While US President Donald Trump floated the idea of a withdrawal earlier this year, now the Pentagon says that its troops are to stay in Syria for as long as needed, meaning it can be indefinitely.

While Washington does not seem eager to engage in a direct confrontation with the Syrian troops now, the US has a long history of using Syrian rebels as proxies, supplying them with weapons that occasionally fall in the wrong hands.

A study conducted by Conflict Armament Research group in December found that the arms sent by the US to what it claimed are “vetted” rebel groups “have significantly augmented the quantity and quality of weapons available to (Islamic State) forces.” While it’s hard to determine whether terrorist groups, such as ISIS or the former Al-Nusra front, seized the weapons from US-backed forces, or that the so-called “moderate” rebels blended in with them and handed over the deadly supplies, the tendency has been a source of major concern for Moscow.

The cooperation between the US forces and militants stretches beyond that, and it includes false flag attacks and provocations with chemical weapons, according to Russia’s Defense Ministry, citing intelligence.

In one of its latest warnings, the military said that the US Special Forces were helping the FSA militants to set up a chemical incident, that can serve as a pretext for a new bombing campaign.