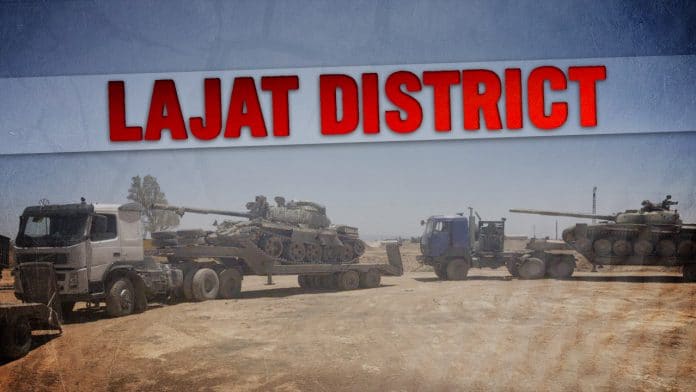 The Syrian Arab Army (SAA), the Tiger Forces and their allies have reportedly established full control of the district of Lajat in the province of Daraa. According to pro-government sources, militants in the area have mostly surrendered to government troops.

Additionally, the SAA and its allies liberated the village of Mleha al-‘Atsh and captured the center of Busr al-Harir.

If all these reports are confirmed, government forces have liberated about 400km2 since the start of clashes in northeastern Daraa last week.

On June 25, the Russian Defense Ministry released a statement saying that Hayat Tahrir al-Sham (formerly Jabhat al-Nusra) had carried out a large attack on government positions in the province. The attack was repelled and 70 militants were killed.

This attack likely was an attempt to sabotage the SAA progress in Lajat.

According to pro-government sources, at least two missiles fell in near the airport. Pro-Israeli sources claim that the strike hit an Iranian cargo plane inside the airport.

Local sources say that Syrian air defense systems were employed. However, it is unclear if some missiles were intercepted.

An alleged pro-government partisan group, the Popular Resistance in Manbij, has announced the start of preparations for an uprising against foreign occupiers – i.e. forces of the US, France and Turkey – aiming to divide Syria.

In April, a similar group, entitled “the Popular Resistance in al-Hasakah”, appeared in eastern Syria. This group also threatened the US-led coalition and its proxies with attacks. However, no notable attacks have been carried out so far.

In any case, appearance of such groups show that far from everyone in northeastern Syria like the US-led coalition.