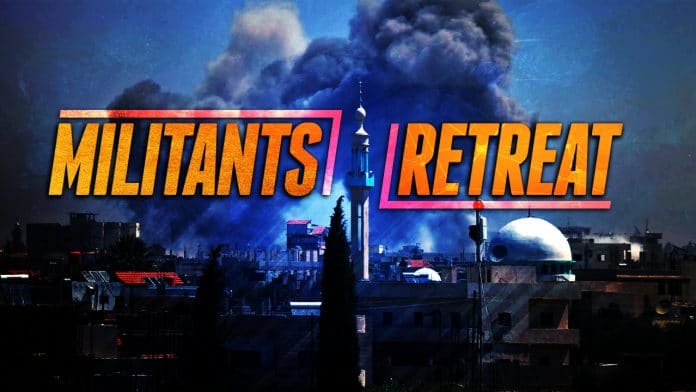 The Syrian Arab Army (SAA), backed up by the Tiger Forces and the National Defense Forces, have liberated the town of Busra al-Harir, the village of Malihat al-Atash and advanced in the direction of the villages of al-Hirak and Nahita.

In Busra al-Harir, government troops captured at least 5 battle tanks – one T-72AV, one T-72 and three T-55M, which had been abandoned by retreating militants.

Meanwhile, pro-government sources said that the SAA is developing a new advance in an attempt to capture the siols and the Gharaz prison southeast of the city of Daraa. The goal of the advance is to outflank the militant-held part of Daraa and to cut off it from the village of Elnaymah, which is the main militant stronghold east of the provincial capital.

Two helicopters of the US-led coalition have evacuated two ISIS commanders from the area of Twaimin in the Syrian province of al-Hasakah, the Syrian state-run news agency SANA reported on June 25 adding that the goal of the move is “prolonging terrorist war on Syria”. The terrorists were allegedly transported to a US military facility in al-Shaddadi.

The Syrian government, Iran and Russia have repeatedly accused the US-led coalition of providing at least indirect assistance to ISIS terrorists. The SANA has released a number of reports saying that aircraft of the coalition evacuate ISIS members from the combat zones in Syria to the coalition-occupied areas.

The US-led coalition officially rejects all the accusations claiming that this is just a propaganda. At the same time, the US-backed Syrian Democratic Forces (SDF) have released a number of statements accusing the SAA and Russia of cooperating with ISIS and supporting the terrorism.

A weak media response of the coalition and the SDF to the SANA accusations is linked with the fact that almost all the remaining strong points of ISIS in eastern Syria are located on the eastern bank of the Euphrates, declared by the coalition as its zone of responsibility.

Thus, on one hand, the coalition is not hurrying up to fight ISIS because this move will undermine its already weak justification of the military presence in Syria. On the other hand, it has to show that it is fighting ISIS in an attempt to hide its current goals – to prevent the restoration of the Syrian territorial integrity under control of the Damascus government, to limit the Russian influence in the region and to assist Israel in opposing Iran.