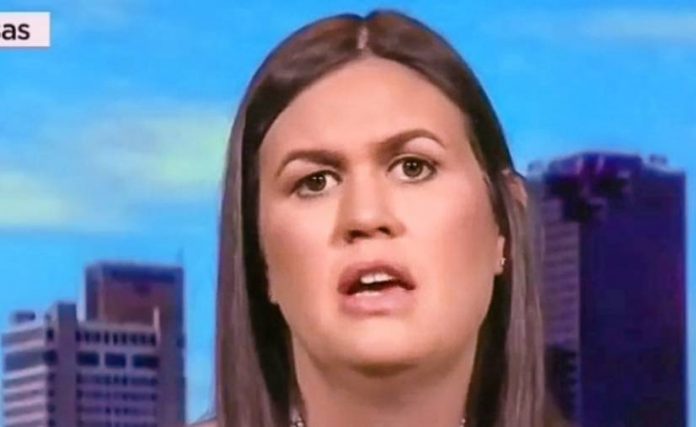 Recently, the Online world was filled with right-wing “outrage” over the fact that Donald Trump’s chief propagandist, Sarah Huckabee Sanders, had been asked to leave a small restaurant in Virginia due to the owner’s disdain for Huckabee Sanders’s often disingenuous defense of Trump’s policies. As many commentators pointed out, Huckabee Sanders had no compunction about praising a recent Supreme Court decision that allowed a private business to refuse service to a gay couple, and undoubtedly many of those now expressing “outrage” at her so-called “mistreatment” most likely applauded this decision as well.  And how many of these same commentators, through online contributions, raised almost a million dollars for the owners of an Indiana pizzeria after they announced they would not provide catering services for same-sex weddings (How To Get Rich in America, Pravda.Report, April 9, 2015).

But what has been left out of the equation is that people like Trump and Huckabee Sanders, who incessantly holler “fake news” when the facts don’t suit their delusions, certainly should know how to create fake news themselves.

Today in America, the media, and millions of its citizens, are outraged by Trump’s immigration policy that separates children from their parents.  And, although Trump and his fellow goose-steppers have been largely successful in the past diverting attention from their cruelty and ineptitude by attacking the media, exploiting racism, and pandering to the mindless cultism of many of his supporters, these time-worn antics were ultimately unable to erase the images of crying children being held in cages.

So what better way to shift attention away from the true victims than to become a “victim” yourself?

According to the Washington Post, the restaurant Huckabee Sanders was asked to leave is a “farm to table” style restaurant that seats twenty-six people and “is no bigger than some apartments.”  It is roughly two hundred miles from Washington D.C.  Huckabee Sanders, or someone in her party, had apparently made reservations under her husband’s name.

The restaurant is located in a small Virginia town with a population of around 7000.  The citizens of this town had voted “overwhelmingly against Trump in a county that had voted overwhelmingly for him.”

Also, according to Heavy.Com, the restaurant owner is environmentally conscious, receives vegetables from a farm founded by Mexican immigrants, and has gay employees-everything Trump despises.

So, let’s examine this scenario.  First, the Washington D.C area has a plethora of larger restaurants Huckabee Sanders could have gone to, where she would have probably been welcomed; Second, the reservations suggest that Huckabee Sanders’s party intended to make the two hundred mile drive and did not just come upon this restaurant by happenstance; Third, the restaurant is located in an oasis of liberalism surrounded by a desert of Trump supporters; Fourth, the political views of its owner, the fact that it is owned locally and not by a corporation, and its small size virtually guaranteed that the presence of Huckabee Sanders would cause consternation; Fifth, other slime that works for Trump, like Stephen Miller and Kirstjen Nielsen, have recently been heckled at restaurants; Sixth, Trump has already shown, through the sycophantic antics of Mike Pence, that he is willing to send his lackeys to places, just so they can make dramatic, highly visible, exits.

Add them up and what do you get?-the old diversionary tactic of criminals portraying themselves as victims to divert attention from their crimes.  This is reinforced by the fact that Huckabee Sanders did not simply state she was asked to leave a restaurant:  She made a special point of both naming the restaurant and giving its location, and, in doing so, may have, according to a former director of the Office of Government Ethics, violated ethics laws by using her official White House account to disseminate this information.

There is little doubt that Sarah Huckabee Sanders is one of the most despicable human beings to ever walk the face of the earth, and whatever shreds of a soul she once had have long since evaporated.  She is not a victim.  She is, like the tyrant she serves, a cold, calculating, dissembling, mendacious, hypocritical, sociopathic fascist.

And she knows that, in the cult of Trump, you can fool some of the people all of the time.

A couple of days ago, I wrote an article, entitled The Sarah Huckabee Sanders Scam (Pravda.Report, June 24, 2018) that discussed the incident where the chief propagandist for America’s wannabe dictator was asked to leave a small restaurant in Virginia.  Much has happened since that time, so I thought I would update readers.

Yet this is the same Mike Huckabee who, a short while earlier, denounced Nancy Pelosi’s criticism of separating immigrant children from their parents by tweeting that Pelosi’s new “campaign committee” was comprised of Hispanic gang members.  Not only was this tweet condemned as racist, it also ignored the fact that many Hispanic people seeking to immigrate to America are doing so to escape rampant gang violence in their home countries.

And it should not be forgotten that Huckabee was also a vocal proponent of Kim Davis’s refusal to issue marriage licenses to same-sex couples, and even proclaimed that Davis only had to obey laws that she believed were “right.”  Now his daughter is quoting the Bible to rationalize why even laws many believe are cruel and unjust, like separating immigrant children from their parents and putting them in cages, must still be obeyed.

2.     Since the Huckabee Sanders incident, or in close proximity to it, the following has also occurred:

a.     A woman threatened to call police on an eight-year-old African-American girl for selling bottled water without a permit;

b.     The United States Supreme Court continued to endorse businesses that discriminate against gays and lesbians by declining to hear a case involving a florist who refused to serve a same-sex couple;

c.      This same court, fortifying its own politicization and corruption, continued to undermine democracy by rubber-stamping racist political gerrymandering;

d.     A transgender woman was kicked out of a restaurant in Washington D.C.;

e.      A pharmacist in Arizona, on alleged “religious” grounds, refused to fill a miscarriage prescription for a customer.

And there is absolutely no doubt that all these actions would be heartily endorsed by Huckabee Sanders, her father, and Donald J. Trump.

If this was the case, it would seem that Huckabee Sanders, instead of complaining, should have been grateful to be booted from an establishment that was allegedly so filthy.  The facts, however, (these are the things that Trump and his supporters so blissfully ignore) state the opposite:  According to an article on the WSCOTV website, the restaurant’s recent health inspection “includes no records of violations.”  The inspectors even complimented the restaurant for “good food/unit temperatures” and the cleanliness of the staff.

4.     Finally, in keeping with his policy of diversion (which I discussed more fully in the article mentioned above), Trump could take an inordinate amount of time criticizing a small restaurant, yet he seemed undisturbed by the news that motorcycle manufacturer Harley Davidson was shifting more production jobs overseas due to his tariffs.

But hey, what’s the loss of American jobs when there are dirty canopies to attack.

Several media outlets and politicians, many of whom have been largely critical of Trump, have now taken great pains to vilify the restaurant that refused to serve Huckabee Sanders.  Democrat Elijah Cummings, for example, stated that Sanders should have been served.

I completely understand that for African-American politicians like Cummings, the denial of service in public accommodations conjures up images of people being refused simply because of their race.  I also understand the cliché that “You can catch more flies with honey than vinegar.”

But this ignores another axiom verified by the pages of history:  You can never appease a fascist, so never attempt to do so.

One fundamental tactic of fascism is to create laws, rules, and ethics that your opponents must obey, but your followers can ignore.  This article provides numerous examples of that very reality.

The current demands for “civility” and “respect” are certainly worthy ideals if practiced across the political spectrum.  But Trump and Huckabee’s hypocritical, fatuous tweets, and Huckabee Sanders’s own rudeness and mendacity, clearly demonstrate they have no desire to reciprocate the “civility” and “respect” they expect their critics to adhere to.

In fact, the real reason fascists demand “civil” and “respectful” discourse from their opponents is so they can paint them as weak and lacking in the capacity to passionately defend their principles.  Hitler, for example, didn’t take Neville Chamberlain’s appeasement as a show of respect; he took it as an invitation to seize more and more territory.

While there is virtually no chance that the denial of service to a soulless person like Huckabee Sanders will cause her, or those of her ilk, to develop any empathy for people who are denied service, or unjustly targeted, because of their race or sexual orientation, at least she was treated the way she expected others to be treated.