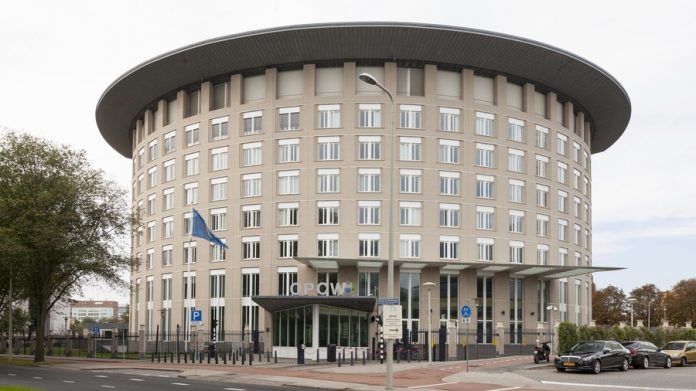 [ Editor’s Note: Britain literally admits defeat over what its Intel folks thought was a brilliant scheme – to nail Russia by setting it up to take the blame for the exotic nuclear poisoning of Mr. Skripal and daughter.

The whole thing was a tragicomedy of errors, signaling a rig job when the Brit spooks thought they could pull it off without sharing the evidence with the accused party. Whitehall would have just laughed off anyone trying to frame Britain that way.

In the end, the OPCW did not lay blame, but reported that the nuclear poisoning used could have been produced by a number of countries. Our own Gordon Duff stated on day two of the hoax that any university with a serious organic chemistry lab could have produced a “bench sample”.

Despite my days spent at NC State in Chemical Engineering, I would not count myself among those that could, as it is a graduate degree playpen to be fooling with that kind of stuff.

When the scam fizzled out, as did the claims of Assad gassing the poor East Ghouta human shield hostages so cruelly used by terrorists and the US Coalition, the Brits should have moved on.

But now they are trying to correct one of the big mistakes they made, thinking that out of fear of the Brit Intel spooks, the OPCW could be railroaded into helping lynch the Russians without Moscow having access to the evidence. VT sends a big salute to the OPCW for not getting sucked into such a nasty affair.

Now the Brits want to change the rules so the OPCW is able to lay blame in the future, so they can have another go at doing a nuclear poisoning. It is sad to see Britain flailing around like this, putting on a big show about standing up to Russia with such pitiful theatrics.

I get a strong sense that some people are working to create a need for their continued employment and funding, to create distractions for the Brits, whose government is sadly masquerading as a world power, as evidenced by its stooping down to try to pull off this Skripal caper, when it can’t even maintain its military weapons systems … Jim W. Dean ]

Moscow strongly opposes the UK’s attempts to give chemical watchdog OPCW authority to pin the blame in chemical attack probes, as it may turn the body into a political tool and undermine the entire international security system.

An ongoing special conference of the Organization for the Prohibition of Chemical Weapons (OPCW) in The Hague was called by Britain, which insists that the body should have the power not only to investigate alleged chemical attacks as it does currently, but also to identify the culprit and assign guilt.

The draft proposal, swiftly supported by London’s allies, represents “a direct invasion of the exclusive prerogatives of the UN Security Council,” the head of the Russian delegation, Georgy Kalamanov, said in his speech at the conference, adding that it also “undermines the authority of the OPCW and the very integrity of CWC (Chemical Weapons Convention).”

The Russian representative slammed the attempts by the UK to turn the OPCW from a body focused on “providing technical assistance to member states in executing the requirements of the CWC” into a “quasi-prosecutorial, policing and forensic-medical structure.”

“Such a course is fraught with unpredictable consequences,”Kalamanov warned. “Won’t it lead to a collapse of the global nonproliferation regimes or even the breakdown of the whole international security system, established after World War II with the central role of the UN and its Security Council in international affairs?”

Even under its current mandate, the OPCW at times abuses and violates its own rules, Kalamanov noted, recalling the probes of the chemical incidents in Syria. He reiterated that in many cases they were carried out “remotely” and in violation of the core principle of Chain of Custody and many of the CWC norms, and relied on evidence from biased and unreliable parties, completely ignoring the arguments and data provided by the government in Damascus.

Kalamanov also addressed the poisoning of double agent Sergei Skripal earlier this year, which he said was absurdly and “cynically instigated by the UK against Russia,” and in which the OPCW took a back seat and provided no new insight but instead simply agreed with London’s narrative of Moscow’s “highly likely”involvement.

Ahead of a vote planned for Wednesday, Kalamanov urged partners to unite in order to block the “dangerous initiative,” saying that Russia will present its own draft on the OPCW mandate during the conference.

UK Foreign Secretary Boris Johnson, who arrived in The Hague for the occasion has, meanwhile, called on the member states to refrain from backing the Russian proposal. “I would ask all those present to vote against the other tabled motions which would render the OPCW toothless and undermine the Technical Secretariat and Fact-Finding Mission in Syria,” Johnson said.

The US, France and Germany have already said that they are willing to back the UK in its push. Britain and its Western allies argue that the lack of powers on the part of OPCW has allowed the Syrian government to escape responsibility for chemical attacks against its own citizens, though in many cases no convincing proof that Damascus was behind the claimed atrocities was ever presented.

Meanwhile, the chairman of the OPCW special session, Adbelouahab Bellouki, said on Tuesday that the vote on the UK’s initiative will take place “in 24 hours,” adding that there had been no consensus on the proposal among members.