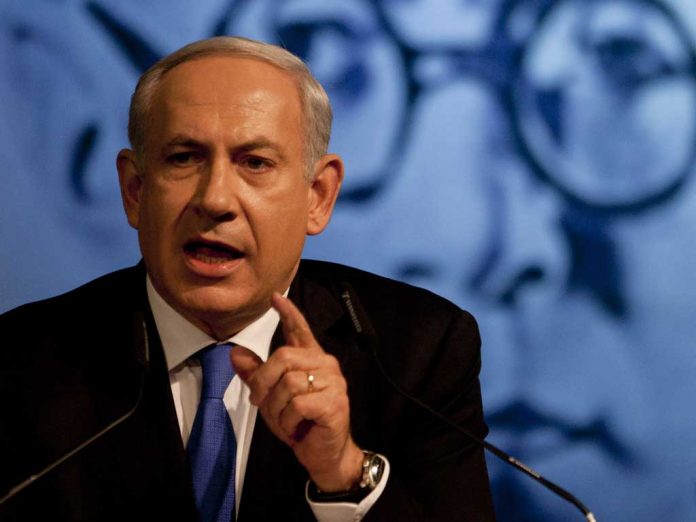 [ Editor’s Note: You just can’t make this stuff up. Bibi thinks he can steer Iran’s soccer victory national pride into overthrowing the regime. Good luck with that.

Sure, many Iranians are struggling with growing economic challenges, but so were the Russians when the US-Jewish Oligarch duo was raping Russia, looting the country with the goal of making it a de facto US colony, à la Philippine days.

While many in Congress are feigning horror at the thought of anyone interfering in US elections, the red carpet is rolled out inviting Israel to do so. And let us not forget the list of seven countries that the protectors of freedom and democracy wanted to “take down”.

Thank you General Wesley Clark. Missed in the reporting and post analysis of that shocking revelation is that neither the US government nor anyone in Congress ever denied it.

The percentage of Iran’s current opposition would compare to the US labor unions. Sure, they exist, and have their demands. But are they ever going to replace the US Deep State regime? I don’t think so.

From a political standpoint, one must give Bibi credit for his theatrics. While the Israelis are generally viewed as a smart people, and Jews in general not an easy target for being conned, Netanyahu seems to be a master at it.

He is a larger scale version of the Trump supporters, who ignore anything in Trump’s background, or his many conflicts of interest and self-dealings, and choose to believe he actually has it in his bones to serve anyone’s interest but his own.

The vast majority of Iranians know that their economic difficulties are the direct result of economic warfare against them. They may have political issues with the mullahs, but they know who their real enemies are.

I have past and current history supporting me on this – that the concept of political frauds being a threat to everything we hold dear is not a theoretical concept. We live with it day in and day out, and swim in a sea of confirmation. This ends my cheery missive for today … Jim W. Dean ]

Showcasing his ball-dribbling skills, Benjamin Netanyahu engaged in some footsy lobbying with Iranians, insisting that, if their national team could stop Cristiano Ronaldo, then the opposition can surely take out the government.
–

Playing on the emotions of millions of Iranians, who were thrilled to see their team achieve an “impossible” World Cup 1-1 draw with Portugal, the Israeli PM decided to demonstrate he too can play ball, while conveying his love and care for the Iranian people.

Netanyahu appealed to the Iranian opposition to seek inspiration in their squad’s performance against superstar Cristiano Ronaldo and his boys, and to find the “courage” to stand up against their government.

The euphoria felt by the fans at the FIFA World Cup in Russia, the PM hinted, can only be exceeded by the feeling of total freedom when the government of Israel’s arch-rival, which is, of course, the root of all Iranians’ troubles, is toppled.

“Iran has many problems — air pollution, water scarcity, billions wasted on terror,” he pointed out. “Can you imagine what would happen if the Iranian government, instead of wasting your money in Syria, in Yemen, and in unnecessary wars in the Middle East, would start investing it in solving these problems in Iran?”

Stressing his desire to help Iranian people help themselves, the Israeli PM painted a bright future, in which “Iran’s soccer team goes head-to-head against Israel in a free Tehran. On that day, we’ll all be winners.”

Attempts to win the hearts of the English-speaking Iranian social media users have become Netanyahu’s signature tactics over years of meddling in Iranian affairs.

It’s not the first time Netanyahu has used sports events to encourage the Iranian opposition to rise up against Supreme Leader Ali Khamenei. Tehran has repeatedly accused Washington and Tel Aviv of providing support for sporadic protests aimed at overthrowing the government.