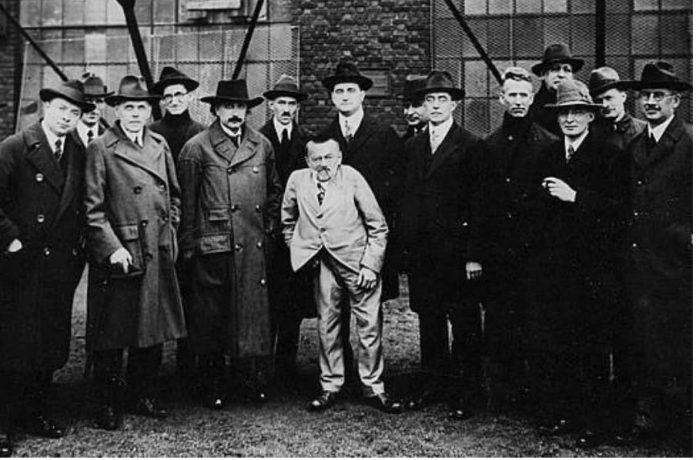 Tesla threatened the power status quo (PSQ) in ways they could never have imagined, illuminating their designs as brilliantly as he stroked the “…wheelwork of nature”.

Another genius originally hailed by microbes of the ND as, “The Angel of Electricity”…that was before he fell to what the PSQ obviously consider the “dark side”—humanity and all the things humanity is meant to mean. Humanity…conscience, decency, compassion, dignity, honesty, freethinking, sense of connectedness with…humanity….

Eric Dollard is that other genius. His quote about Tesla and the ND is perfect:

“Tesla scared the central bankers senseless. They knew what his plan meant. Energy independence meant an almost complete loss of control of the people.”

Control of the people, accent on control. Dollard was useful to the PSQ until he got off his leash. Now he sleeps in his car, in the desert, having racked up eight burned-down laboratories, and other typical PSQ treatments. Perhaps the moniker: “A new Tesla” implies Dollard’s capabilities, and danger to the PSQ. Eric Dollard is reportedly the only man to replicate Tesla’s capture of Aether.

Power is the nastiest disease if you consider the current kaleidoscope of consequences. The following quote seems as perfect as Eric Dollard’s above, but from the illuminated side:

“Power is the ultimate aphrodisiac”

That’s from Henry Kissinger, darling of the PSQ, Nobel Peace Prize winner in 1973, now restricted from international travel by a number of countries eager to arrest him for war crimes.

A fine article penned by Andy Piascik, titled: Crimes against Humanity: Why Is Henry Kissinger Walking Around Free? contains this guarded truth that permeates humanity same as Aether permeates this universe:

“…the guiding principle of empire, one that Kissinger and his kind accept as naturally as breathing, is that independence cannot be allowed.”

At least hope exists. Kissinger was appointed to lead “investigation”…ahem, of 9/11, but uproar of enough people thinking independently nixed that setup.

The “Nasty Disease”
That would be power, government juiced by the steroids of private central banking: debt money conjured from thin air, which translates mostly in hyper concentration of wealth in the fewest hands, and war. Money as a store of value has metastasized into a credit card charged to future generations, issued by a tiny cabal of hyper-wealthy psychopaths. Only four percent of humans are born without a conscience, psychopaths, providing extreme buoyancy regarding the rise to power and PSQ levels of inhumanity. What they do to the other ninety-six percent seems as unimaginable as what Nikola Tesla gave to humanity and would be giving to humanity if not for that nasty disease.

One thing about the PSQ, the core of their power rests upon humanity’s weaknesses. Their palette of inhumanity…fear, deception, war, racism, genocide, propaganda, controlled bread and endless circuses, and so much more it seems hopeless. Well, people, we got lucky that Tesla was so full of humanity. Imagine if he’d been born sans conscience!

How full of humanity? Einstein was full of equations the PSQ diddle to their advantage. They gave him ticker tape parades on Wall Street (a PSQ altar).

In light of the kaleidoscopic suppression, evasion, diversion, and endless lies still saturating the public mind, Tesla’s degree of danger was aetheric, same as his gifts to humanity.

Perhaps a most vivid example of the PSQ versus humanity: “The War of the Currents”.

It was Thomas Edison and J.P. Morgan and their dead-end direct current (DC) versus Nikola Tesla and George Westinghouse, with their alternating current (AC). The DC team wallowed in inhumanity, publicly electrocuting “…surplus circus animals” including elephants—all the way to the first “electric chair” killing a death-row inmate. Unfortunately, the execution was more of a hideous, smoky slow cooking. The coroner said the man’s whole spinal cord burst. The DC demons strained to fill the public mind with the dangers of high-voltage AC.

Fortunately, the team with polyphase AC prevailed, wiping out fortunes of “…microbes of a nasty disease” invested in DC. And now, the entire systems of AC power distribution, generators, motors…all of it is virtually unchanged from Tesla’s forty patents from 1888. All the miles and miles of monstrous transmission towers and their lacings of wires feeding forests of dead-tree poles wearing transformers…Tesla discovered another better way.

Ironically, it was while working for Edison that the blue spike phenomena touched Tesla’s mind with potentially the greatest-ever advance in the fortunes of humanity. Edison’s use of DC generators; the DC electrical system was the only system available to deliver electricity to America’s homes and factories—before Tesla’s invention of the Polyphase AC generator, motors, transformers, long-distance transmission…became the industry standard.

Electricity is commonly defined as energy resulting from the existence of charged particles as an accumulation of charge (static) or flowing as a current.

Edison’s DC distribution system was so inefficient that power-line resistance would cause voltage to fade within several city blocks. Voltage was cranked up very high at the main generators, and “pumping stations” were required every half mile to boost sagging voltage and current.

When a main switch was thrown to hit transmission lines with cranked-up voltage right off the main generators, a blast of blue and purple spikes and stinging, shocking sensations radiated in all directions from the transmission lines before electrons (current) flowed in the lines. This instantaneous phenomenon actually killed some linesmen. Engineers considered these bursts of magnified electrostatic potential a nuisance to be eliminated. Tesla saw what led to his greatest gift to humanity, focus of the rest of his life.

An undiscovered form of energy. The true electricity of this universe, Aether. Electricity without flow of massive charged particles (electrons). Mass-free, cold electricity. Then was born the Tesla Coil, and the magic of impulse.

Tesla observed the “blue spark phenomena” only in the instant before electrons began flowing in the lines. His genius manifest in recreating the situation with hyper-frequency DC impulses in a conductive system—impulses quenched before any flow of electrons in the system. The actual Tesla Coil.

While the primary function of the contrived “Tesla coil” is to disengage Tesla’s masterpiece from reality, the primary function of the Tesla Coil is to disengage voltage from current—disengage “the true electricity” (Aether) from the flow of massive electrons. Only when zero current is achieved in the Tesla Coil will Aether flow freely in the system and the “Tesla Effect” be realized. Any flow of electrons chokes off the Aether. It’s no coincidence that the awesome-spark! toy “Tesla coil” has popularly replaced the Tesla Coil to choke off Tesla’s threat to the PSQ.

Tesla seems the greatest ever illuminator of that sage bit of wisdom regarding government/PSQ: “Never believe anything until it has been officially denied”.

Wardenclyffe would have been the greatest of all gifts to humanity. The PSQ demolished Wardenclyffe before the gift could be opened.